"We assume that by 2030 there will be about 3 million acres of land in the United States with solar panels on them." 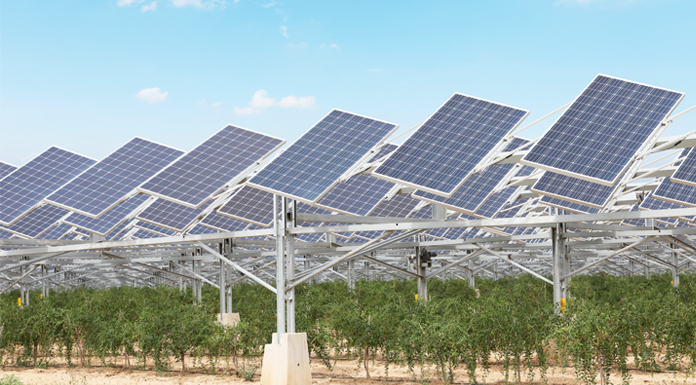 Solar panels located in agricultural fields can benefit both energy and crop production. These projects are called agrivoltaic systems.

This year the Chinese provider of Internet information services, Baofeng Group, is expanding the capacity of a 640 MW solar park, located in Ningxia province, raising its power to 1 GW, combining photovoltaic power generation with production of berries of different types, including blueberries.

Baofeng Company started managing a desertified land area of ​​more than 100 square kilometers in 2014. Initially, alfalfa was planted to improve the soil. Then the agricultural crops were removed and the construction of solar plants began. Once the project was completed, goji berries were planted under the panels.

"This helped restart agriculture in the region, which in turn revived an otherwise dead expanse of desert," commented a spokesman for Huawei, the project's investor provider.

"The ecosystem in this region has improved and the entire plantation uses drip irrigation, because it is an area that has very little precipitation," says the Huawei representative. Experts claim that the solar power plant effectively reduces the evaporation of soil moisture by 30-40% and, on the other hand, the vegetation cover has supposedly increased by 85%, while significantly improving the regional climate.

The panels were installed at a height of 2,9 meters. which not only offers sufficient space for cultivation, but also allows operations to be carried out in optimal conditions and facilities for maintenance activities, agricultural management and fruit harvest.

In addition, Baofeng uses drones for the inspection and control of the project and is permanently monitored through Huawei's intelligent management system.

According to a study by the University of Arizona, in the United States, photovoltaic projects linked to agriculture are very beneficial, because, among several other advantages, the shade of solar panels on crops can help produce up to two or three times more fruits and vegetables than conventional agricultural facilities.

On another note, the German renewable energy company BayWa re and its Dutch subsidiary, GroenLeven, are building five pilot agrivoltaic energy projects in the Netherlands, where they are testing five different types of crops: blueberries, gooseberries, raspberries, strawberries and blackberries. .

In the United States, the National Renewable Energy Laboratory (NREL), part of the Department of Energy, has supported multiple solar cultivation experiments and assures that these systems "could offer win-win results" in many agricultural sectors.

Jordan Macknick, a researcher at NREL, assures that there are 25 experiments in the US, which include blueberry cultivation in Massachusetts and beekeeping around flowers protected by solar panels in Minnesota.

"We assume that by 2030 there will be about 3 million acres of land in the United States with solar panels on them" for combined agricultural and energy production purposes, Macknick explained.

Hortifrut exceeds 45,67 million US $ in the first semester

What is microbiology and what is its performance in crops?