Argentina: Alert for the presence of fly with spotted wings on blueberries

It is Drosophila suzukii, a species present in Argentina since 2014 and which constitutes a threat to fine fruit productions. INTA Concordia –Entre Ríos– specialists provide guidelines for their identification, monitoring and control ... 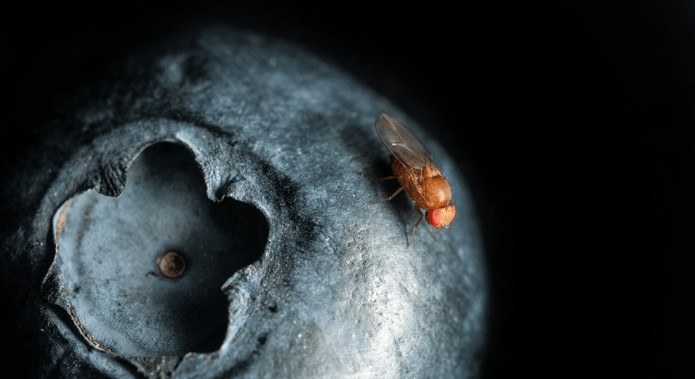 One of the limiting factors of fruit production are pests, some of them with quarantine importance, such as fruit flies. The most important species are the Mediterranean fly (Ceratitis capitata) and the South American fly (Anastrepha fraterculus). Since 2014, Drosophila suzukii (Matsumura), popularly known as the spotted-winged fly, has been added to this complex.

Variations in climatic conditions during winter caused the populations of some groups of insects to show erratic behavior, as is the case with this fly. Thanks to the periodic monitoring carried out by specialists from INTA Concordia –Entre Ríos– its presence was observed in some establishments with blueberry crops of early varieties.

"The adults of this species are two to three millimeters long and have red eyes, the color of the thorax is light yellow or brownish and the abdomen has black bands," said Juan Pedro Bouvet, a researcher specialized in citrus and blueberry crops from INTA Concordia–.

The males have dark spots on the wings, a characteristic that is not shared by the females. "It tolerates different climatic conditions and the wind favors its dispersal, since they are small flies," he added.

After copulation, the females look for healthy and mature fruits to lay their eggs, which they insert into them. "Each female can lay up to 21 eggs per day, and she does this by cutting the skin of the blueberry," explained Bouvet.

The openings caused facilitate fungal and bacterial infections, which contributes to the deterioration of the fruit. To this is added that, at birth, the larvae feed on the pulp and benefit from the appearance of yeasts that cause fermentation.

The host range of the pest is wide, however, fine fruits (such as blueberry, cherry, raspberry, strawberry and blackberry) are the most chosen by the pest because they have delicate skin. The grower may see symptoms such as superficial wounds, softening, wrinkling, and premature drooping.

For Valeria Viana, specialist in plant health at INTA-Conicet, monitoring throughout the year, both in commercial crops and in alternative hosts, is the most important step in determining the presence of the pest.

"In Argentina, the type of trap or the specific attractant for monitoring this pest has not yet been established, currently it is done by using both transparent and red traps with food attractants," said Viana.

The control guidelines recommended by the specialists include cultural practices such as eliminating food sources (either from alternative hosts close to the crop, such as fruit from the crop that is not marketed), correctly managing the transfer of fruits, cleaning of tools and machinery, avoid abandoned plantations, manage ornamental and wild hosts, carry out periodic monitoring and be in communication with neighboring productions.

They insist on supplementing with massive trapping since it is a measure with low environmental impact and great effectiveness. "It consists of placing a high density of traps with an attractant that is as specific as possible and thus capturing as many females as possible before they damage the fruit", explained Bouvet.

With regard to chemical control, active principles for the control of Drosophila suzukii have not yet been authorized in the country. Physical control, such as the use of barriers or meshes, although effective, will be subject to the profitability of the producer. Finally, the specialists mentioned that the Sterile Insect Technique (SIT) and biological control with entomopathogenic fungi are being evaluated.

Plant improvement contributes one billion a year to the Spanish economy, according to a study

New bioreactor developed by IRTA for in vitro plant cultures