"The growing areas were changed to those that were more profitable. Also within the business world there were many changes. The initial large number of producers and investors was reduced to those more efficient. The same happened in the export issue. 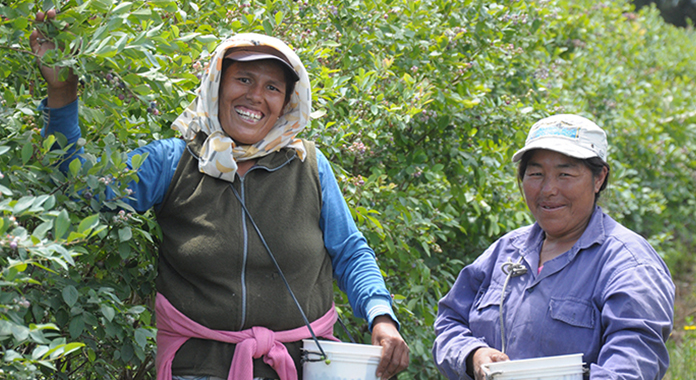 More than 20 years ago the cultivation of blueberries began in Argentina, when the southern hemisphere had just discovered this superfruit. Chile was already a great producer, but Uruguay was just beginning and in other countries there was still no dream of this crop.

In its beginnings Argentina was the classic early supplier, being practically only during October and November. His industry was based on starting as soon as possible, for which he implanted early varieties, looked for precocious regions and worked with air shipping.

In the first stage there was a real blueberry boom. Many investors threw themselves into this business without sparing expenses, since from the beginning it proved to be an expensive crop, which is only profitable by investing with the best technology. The projections promised more than attractive earnings. Since then there have been many twists and turns and it took a long time for the business to mature. The very attractive earnings were calculated in a world with a very limited supply and when there was a very interesting trading window.

When Argentina began in the world of blueberries, it was the only supplier that arrived very early to the markets, just as the northern campaign was ending and before Chile entered with its growing volumes.

October and the beginning of November was in the hands of Argentina. But this soon changed. First, as supply increased, prices began to fall. On the other hand, this window was occupied by other suppliers, so buyers were no longer eager to stock up on blueberries during those weeks. The price drop was very steep. The business no longer presented such profits and it was necessary to make many adjustments, increase profitability, reduce costs to adapt to the new scenario. The cultivation areas were changed to those more profitable. Also within the business world there were many changes. The initial large number of producers and investors was reduced to those more efficient. The same happened in the export issue.

The first plantations were made in the San Pedro area, about 100 km north of the city of Buenos Aires. But it was soon discovered that the Concordia region in the Entre Ríos province, located some 400 km northeast of Buenos Aires, exhibited much better agro-climatic characteristics. The soils are lighter, sandy, there is great availability of good quality water and the incidence of frost is lower. In the Concordia region, higher yields and fruits of optimum quality are obtained.

As the goal for many years was to enter the markets as early as possible, cultivation areas further north were sought. Tucumán was the place that best suited the blueberry. In turn, crops were implanted in Salta and Corrientes.

With the changes that occurred in the world of blueberries; Precocity is no longer the most sought after, gaining importance among others the yield of the crop, the quality of the fruit, the availability of water, logistics and ease of obtaining harvesters. Therefore, there were changes in the location of the farms, concentrating on those regions where this crop is more profitable. Currently there are about 1.400 ha in the northernmost region (Tucumán, Salta), 1.100 ha in the northeast region (Entre Ríos-Corrientes) and 300 ha in Buenos Aires. About 20-22.000 tons are produced on this surface. Of these, 70% is exported fresh, 20% is frozen and 10% is destined for the local market.

As in the other regions, there were many changes in the varietal theme. The cultivation began with the now legendary O'Neal. In the initial stage, Misty, Jewel and Millenia were also implanted. These are disappearing more and more. Currently the Snowchaser, Star, Farthing, Primadona, Blue Crips, San Joaquin and Kestrel predominate. In addition, producers are aware that varietal replacement is a constant, surpassing genetics always appear.

Another point that is becoming increasingly important is organic production. Argentina began many years ago in this form of production. Within the fruit industry, the country is known for the organic production of apples and pears. Blueberries are increasingly being added to these fruits. In 2019/20 15% of exports corresponded to organic, in the 2020/21 campaign it is estimated to be 30%.

The full article can be found in the free specialized magazine BlueMagazine. Login to https://www.revistabluemagazine.com/publicaciones/edicion-2021/ and do not miss the news of the blueberry industry.

Peru, the land of "blue gold"