The activity was attended by the Minister of Economy, Nicolás Grau, from the Ministry of Agriculture, Esteban Valenzuela, and also by former President Eduardo Frei, who highlighted the importance of public-private work to promote the fruit and commercial development of the country. In the instance, the importance of advancing in solutions to unblock the logistical conflict that affects the agro-export sector and the country, whose effects are impacting on inflation and coordination between the main actors, was highlighted. 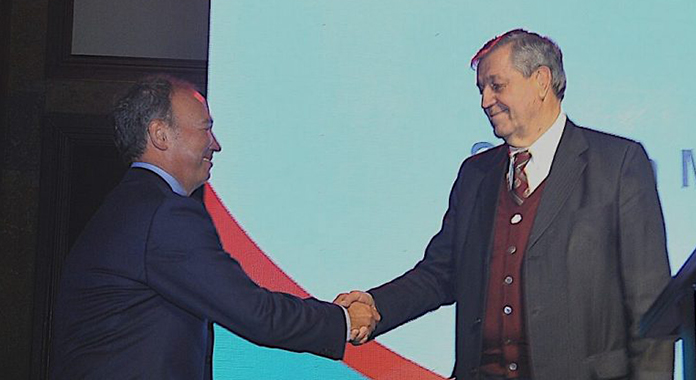 The activity was attended by the Ministers of Economy, Nicolás Grau, and of Agriculture, Esteban Valenzuela; of the former president and former plenipotentiary ambassador of Asia Pacific, Eduardo Frei, as well as representatives of workers' and carriers' organizations, private operators, former government authorities, the Minister of Agriculture of Ecuador, Bernardo Manzano, and the Chinese ambassador to our country, Niu Quingbao .

In his last public account, Ronald Bown highlighted the work carried out in recent years to position Chile as the main exporter of fruit in the southern hemisphere and the opening of new markets through active collaboration with authorities from different governments. He also highlighted the entity's work to strengthen the image of Chile as a reliable supplier of quality fruits, its permanent commitment to the communities and the strengthening of partner companies in the sector.

On the future challenges that await the fruit sector, he referred to the importance of advancing in productive and sustainable activities at a social, environmental and economic level; and also in implementing solutions to unblock the logistical conflict that has hit agribusiness and the entire country in the last period.

“As something pending, we still have the important initiative and challenge that our institution has assumed in the search for a definitive solution to the complex logistical situation that our country faces, the effects of which create serious problems of inflation and affect consumers profoundly, price increases in services that are difficult to justify and a lack of coordination between the main actors, affecting the departure and arrival of our fruit, which produces serious effects on its arrival condition as a fresh product," said Bown, who added that for this created a logistics table with different sectoral unions with which it is hoped to find concrete solutions. Along the same lines, he stressed that in this regard there have already been important rapprochements with the authorities.

For his part, who will give continuity to Bown's legacy and will be in charge of assuming the future challenges of the union will be Iván Marambio, new president of Asoex as of September XNUMX, who highlighted the importance of unity, of public-private dialogue and also inclusive growth.

“Today we have a fruit season upon us, the challenges are enormous and I hope that the characteristics of Asoex that I have admired will be maintained and increased. First, teamwork, unity, including communities, trade associations, social organizations and companies so that together with the government we can work collaboratively achieving public-private agreements. Second, encouraging fair play while respecting the regulatory framework and promoting growth.

Former President Frei, meanwhile, addressed the benefits that foreign policy has had for Chileans and the work carried out by Asoex with all governments in a transversal manner, helping to position Chile as the main exporter of fruits in the southern hemisphere and integrating the country to the world and different markets.

“A network of 31 free trade agreements in force today has been built in 64 countries that represent no less than 63% of the world population and 86% of world GDP. In this way, this development has benefited the entire country and the entire population,” he added.

Likewise, Minister Valenzuela highlighted the work of Ronald Bown and emphasized that "we know the pride of the fruit and we love and admire them." He also emphasized that "nobody has any doubt that in any scenario, water must be guaranteed for food producers for Chile and the world."

Finally, he emphasized the importance of working on participatory watershed governance and its transparency, in a co-responsible manner, so that Chile is "stronger as a producer of quality fruits."

Exports of grapes and blueberries would exceed US $ 1.000 million, but avocados no longer