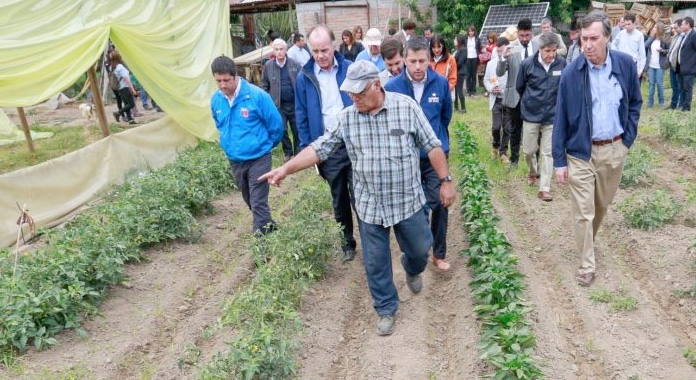 A tour of various communes in the regions of O'Higgins and Maule that were affected by the "hailstorm" Last November, the Minister of Agriculture, Antonio Walker; the national director of Indap, Carlos Recondo; and the executive director of AgroSeguros, Ricardo Prado.

The agricultural authorities visited damaged properties, verifying in the field the state of the different crops, as well as the progress of the emergency measures implemented by this ministry.

On the occasion, several measures were announced in support of small farmers in these areas who saw their crops damaged by this weather phenomenon.

Some of these measures are decree of emergency zone for 10 communes of O'Higgins, extra resources for more than $ 500 million that Indap will deliver to the almost 400 producers affected by this event in both regions, implementation of a technical advisory plan and training by the Institute of Agricultural Research (INIA) for the proper management and treatment of damaged plantations, reconversion by Conaf of the emergency employment program to generate 100 work quotas.

To this battery of actions are added specific provisions for each zone, in coordination with regional governments and local municipalities.

During his visit to Graneros and Codegua, Minister Walker explained that Indap will have extra resources for $ 215 million to help small producers in the region.

"This does not end today. We want to monitor the delivery of resources to accompany the producers who have to replant, who must replant and have affected their working capital. We will not leave them alone, "concluded the head of the portfolio.

In this line, the minister revealed that Corfo, through its IPRO program, will provide resources close to the $ 300 million contribution from the National Fund for Rural Development (FNDR) for investment projects of medium-sized farmers, which allow the economic reactivation of companies that are harmed by natural emergencies.

"In this way, we will have $ 300 million from the Regional Government fund, in addition to the aid that will be delivered directly by the agricultural services," the head of the ministry said.

In the Maule region, the delegation visited farms in Parral and Retiro, belonging to small producers of blueberries supported by Indap, who lost almost all of the berry production after the November weather phenomenon.

In the meeting with small farmers, Antonio Walker informed that Minagri will have $ 295 million to support 209 Indap users who did not have agricultural insurance policies.

In the Maule region, 473 hectares were affected by the November climate event. The 71% of this area corresponds to the farms of small farmers who use Indap.

Minister Walker highlighted the exhaustive work carried out by this portfolio to determine the extent of the damage. "We came to show solidarity with people who lost the 100% of their production. We have made a very deep cadastre to quantify the damages in Longaví, Retiro and Parral. We come with a specific proposal: $ 295 million to distribute in the affected producers, mainly small, "said the Secretary of State.

Carlos Recondo, national director of Indap, stressed that "we will help producers without insurance coverage: we will allocate resources for those farmers who have damages between an 40 and an 100%. We will solve the contribution case by case and it will be in a range of between three and five million per farmer ".

He also explained that the possibility of requesting small producers to request extensions, renegotiate or reschedule their financial commitments with Indap will be evaluated. "We will continue to help them without damaging the credit capacity so that they can access a new loan and continue developing their crops that will allow them to recover from these damages," he concluded.

The authorities called on producers to contract agricultural insurance to protect their different crops from the climatic phenomena, which are becoming more and more frequent. AgroSeguros subsidizes up to 90% of the policies for these events. To this route were added the Seremi de Agricultura Carolina Torres; the Governor of Linares, Maria Claudia Jorquera; the director of Indap Maule, Óscar Muñoz, among other regional and communal authorities.

Juan Fuentes is a producer of blueberries in the Las Camelias sector in the Parral district; It has a plantation of 1,2 hectares. He says that the frosts are not strange in the sector, but that the hail phenomenon "generated the loss of the 90% of the crop. What remains in production remains to be seen under what conditions it is sold. "