Although high cost and not without obstacles, it is an interesting project that should be studied carefully. 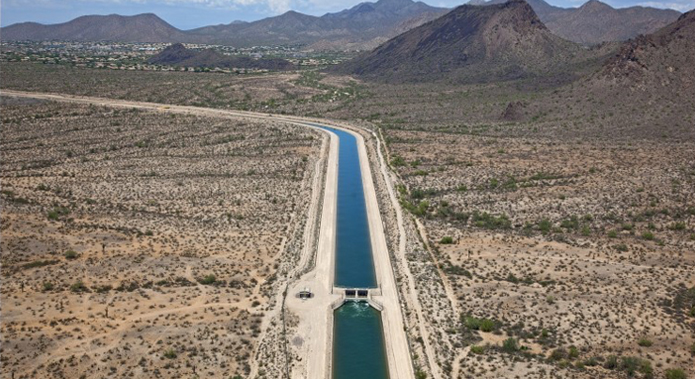 During this month the water highway project would be presented to the MOP, which postulates to be approved as a private initiative. This would allow financing the blueprints that are required before a work of this size can be concessioned. Preliminary estimates suggest that the total cost would be US $ 25-30 billion, and that it would allow at least 450 to irrigate a thousand hectares between the Biobío and Atacama. This would significantly increase agricultural production and exports.

It is not the first initiative of this kind. A few years ago, it was proposed to install a large underwater pipeline that would take water northwards from the mouth of rivers in the Biobío Region. The direct cost of that project would be much less than that of the water highway, but the cost of boosting the water seems to make it unviable for use in agriculture, according to the proponents of the water highway. The possibility of using desalinated water for irrigation in the north has also been mentioned, but the cost of energy and that of the respective plant also make it unviable for now. In this regard, although there are experiences in the Middle East of using desalinated water for agricultural purposes, this seems to have only worked economically in Israel. It is possible, however, that, with the reduction of costs of solar energy, it is feasible to reproduce that experience in our northern end, as the cost of desalinated water approaches US $ 0,4 / m {+ 3} .

Proponents of the waterway argue that -except for the extreme north- their project would allow a cheaper irrigation system than all the other alternatives. As gravity would be used to drive water from the Biobío area to the north in several stages, the cost - at least until the Valparaíso Region - would correspond exclusively to that of the investment; North of Aconcagua, however, it would be necessary to pump them. The concept requires the use of water rights from the Queuco River and others from the Biobío Region, extracting up to 8% of its flow in the mountain range. These rights would be used in winter, when the farmers who own them do not use them. The flow would be transported by gravitational channels to the north of the region, where it would be stored in dams, some already existing and others to be built. These waters would be used to irrigate dry land from Yumbel to the VII Region. A part would be delivered to the Colbún hydroelectric dam in exchange for the water rights of this in the mountain range, to begin the 2 stage, of new channels with water driven by gravity to the north, to the Mapocho, to the south of the treatment plant Santiago. A third section would begin in a new reservoir over the Cachapoal River, in the Cordillera, while downstream the second stage canal would replace the dammed waters. This third section would transport the water to the Region of Coquimbo, in the Corrales reservoir, from where other sections would leave, until a fifth stage, which would end in Copiapó. In each of the stages, the waters would be used for irrigation, purification and industry, and in the case of the north, also for mining.

The project is ingenious, but of high cost, since it requires thousands of kilometers of channels to take advantage of the slopes. It is designed in a modular way, so that one could start by doing only the first stage and, if it is successful, move forward. However, it may provoke some environmental apprehensions, because although farmers think that the water that goes to the sea is a lost resource, it fulfills an environmental role, and by decreasing it, the river ecosystems and the mouths of the rivers are seen affected However, the fact that only 8% of river water is required in winter should moderate these fears; even so, it is a factor to consider. Finally, for the financing it would be necessary to charge the farmers, and this could constitute another obstacle. In any case, it is an interesting initiative and should be studied carefully.

Felipe Riesco, Undersecretary of the Environment:
"The first thing is a good implementation of the REP Law"

Peru: blueberry exports grew in the first two months of 2019