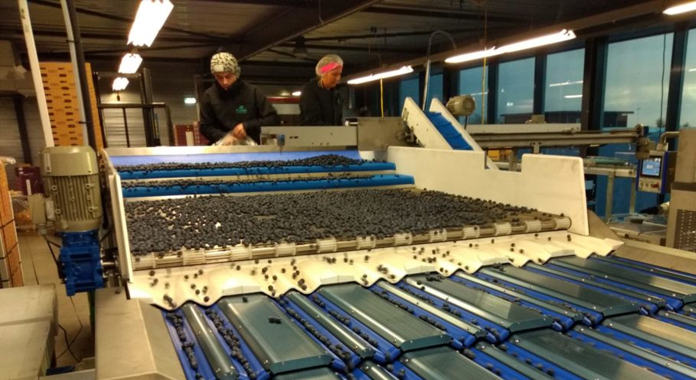 The main fruit export product of Ñuble could have a positive season, as anticipated by the general manager of CarSol Fruit SA, Álvaro Prieto, who highlighted that so far better yields have been observed than in last season. He also stated that they are optimistic about the behavior of the Asian market and better prices in the United States from this month.

The blueberry harvest in Ñuble began in December and will run through March. There are 4.023 hectares in the region, which represents 21,9% of the national total.

According to the manager of CarSol -the third largest exporter of blueberries in Chile in the 2019-2020 season-, “we have seen better yields than last season, associated with good sizes of our fruit. This is associated with a strong push from the technological package applied in fertigation, pruning, weed control, etc. ”.

Prieto explained that “in Asia, we see a market in constant growth, where demand has grown based on supply (thinking of Peru) and we see the Chilean season with good eyes. We must focus on meeting the needs and characteristics of each of the countries to which we embark. Asia is the market with the greatest growth potential for Chile ”.

As for Europe, he affirmed that “it is a more mature market and focused practically entirely on supermarkets. Quality is key here, this is a market that rewards good quality, but punishes bad arrivals a lot ”.

Meanwhile, he pointed out that “the United States is the natural market for Chilean fruit and continues being the natural home for older varieties that don't have the legs for longer trips or more demanding markets. The characteristic elasticity of this market allows us to dream of high prices from January shipments onwards. December and early January are highly indexed to the volumes from Peru that arrive on the market ”.

The executive also said that "in general, costs have remained stable, only labor and the increase in protection elements related to Covid have had a relevant impact on costs."

Along these lines, he confirmed the impact of the pandemic on the availability of labor. “Indeed, this year there has been a decrease in the supply of labor for the blueberry harvest and also in the blueberry packing process. This situation is transversal in all the regions where blueberries are produced and also for other fruit species and associated agricultural tasks ”.

Prieto explained that “the main factor is the Covid effect, which has several implications: many mothers and fathers have nowhere to leave their children under this contingency; there is fear of going out to work because of the risk of contracting the virus; likewise, state aid does not provide an incentive to go out to work, since they are lost in the face of a labor contract; a late entry of students to work, due to the delay of the school year; and older people who do not want to run the risk of getting infected ”.

Similarly, the CarSol manager indicated that "another factor, less relevant than the previous one, is the incorporation of new productive hectares of cherries, mainly, which peak between November and December."

"Without a doubt, the lack of labor supply has generated an increase in the cost of labor this season, the increase is variable according to the size of the agricultural holdings and the species in harvest", he concluded.

Climate control in greenhouses: the UAL puts a decade of theory into practice

Raspberry, one of the crops with the best export expectations