The authority indicated that this didactic material will be disclosed to the network of advisers and called on the producers to take into account all the recommendations to reduce the presence of the pest and thus reduce the negative effects from the economic and productive point of view. 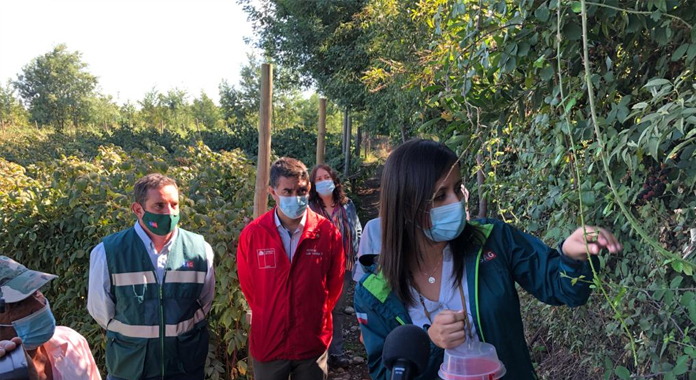 From the property of the small producer Álvaro Letelier, in the Los Almendros sector in San Clemente, the Maulino agricultural authorities made a call to farmers and technical advisers to reinforce preventive, monitoring, surveillance and management measures to face the Drosophila plague. Suzukii or spotted-winged fly.

The Seremi of Agriculture, Luis Verdejo, together with the Regional Director (S) of INDAP, Belgium González and the Regional Director of SAG, Fernando Pinochet, placed a trap to monitor the presence of the fly and, in the company of professionals from SAG, they recorded a practical class, in the field, with the farmer and part of the Prodesal team of the commune.

"The objective of today's conference was to teach the farmer how to make a trap and a homemade attractant, how and where to place the trap, how to check it to monitor its presence and see the number of individuals on the property and also, what tasks Cultural activities must be done in the orchards to control this pest ”, pointed out the Seremi of Agriculture.

The authority indicated that this didactic material will be disclosed to the network of advisers and called on the producers to take into account all the recommendations to reduce the presence of the pest and thus reduce the negative effects from the economic and productive point of view.

In this sense, the Regional Director (S) of INDAP emphasized that “any plague or disease attack on the crops of small agriculture has a very high impact on their family economies. That is why we need them to join, just as we are working among the agricultural services in a coordinated way, that they also work with their neighbors, with their advisers, since these threats quickly affect an entire sector or even an entire an item ”, said Belgium González.

With the field visit, a process of installation of 250 traps delivered by the SAG to INDAP began to reinforce the surveillance and monitoring actions of the pest. In this sense, the Regional Director of the SAG, Fernando Pinochet, referred to the work that they have carried out in the public-private table of Drosophila Suzukii “this is a work that we have been doing for three years, since we had the first detection in the Maule And today we are delivering these traps to INDAP so that they can strengthen the surveillance and monitoring network. On the one hand, we are going to see in which new sectors it is present and with what intensity and also to project, together with the INDAP teams, where to expand surveillance according to the areas of interest of this pest, "he said.

The Seremi de Agricultura highlighted the formalization of an early warning network, the product of an articulation between INIA, SAG and INDAP, to facilitate phytosanitary surveillance in the region and thus support technical advisers and farmers: “This will help us in the handling of this situation but also to be alert and attentive to possible threats ”. He also indicated that with the support of INIA and the regional government they are working on solutions to manage this new plague, "testing controllers and disseminating cultural measures that combined with products will allow the problem to be maintained at a level that does not mean economic damage to the producer" , he concluded.

Mr. Álvaro Letelier is an experienced raspberry producer, but he saw in this last season some very important damage in his orchard as a result of the spotted wing fly: “After the rains, we saw how these flies appeared and how they were on the fruits too. larvae. The damage is a lot and we have been learning because there are things that one does not know. It is very important that you explain how to set the traps, the damage that these surrounding blackberries do, that you have to eliminate weeds, the fruits that remain on the plants. All of this must be applied because one wants to give people the best and because of ignorance sometimes we do things wrong ”.

The technical head of Prodesal San Clemente, Macarena Lillo and Fernando Durán, in charge of one of the 6 operating units of the commune, explained that the summer rains caused a complicated situation in many areas: “It was like a perfect storm, with high humidity Then the temperatures rose, with the rains they could not continue harvesting and there was a lot of fruit in the orchards as hosts and thus they reproduced more. There was a lot of damage because of what the intermediaries did not want to buy and the situation was very complicated, so it is important that the authorities come and that the farmers see that there is concern and that they have to prepare for the next season ”.

Cell Wall Calcium and Hemicellulose Have a Role in the Fruit Firmness during Storage of Blueberry (Vaccinium spp.)