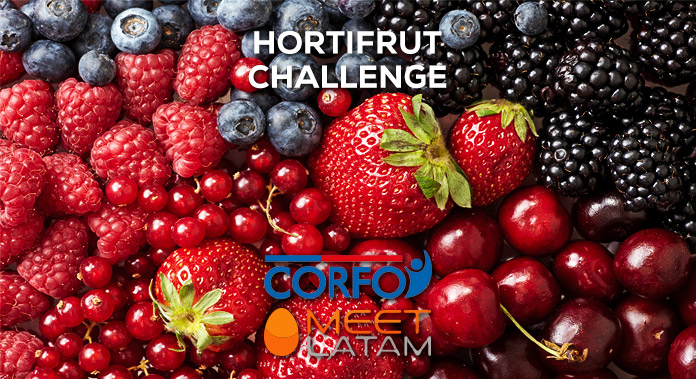 Most Startups have emerged in the last three years and focus on the incorporation of new technologies and management efficiencies, have public and private financing and seek to gain a space in the agricultural sector.

The challenge of increasing productivity in the national agricultural industry involves the incorporation of new technologies into production processes, which allow improving crop yields and at the same time reducing the costs of inputs and labor, among other aspects.

For these reasons, Hortifrut Challenge emerged, an open innovation challenge formed by Hortifrut and MeetLatAm, supported by financing and industry know-how to national technology-based ventures. This program was sponsored by Corfo and the Government of Chile, its objective was to promote technological development in the national agricultural industry.

At the end of November, the closing ceremony of the first generation of the Berries Industry Acceleration Program was held. This activity allowed to support the creation of prototypes, technical and commercial validations of initiatives that contribute to the improvement of quality and Condition of berries in pre- and post-harvest.

During the event, the seven Companies that received support from the program were presented, among which the following stood out:

The Startup Agricoch SpA., which arises from this first version of Hortifrut Challenge and from the concern presented by Brenda Hetz, General Director about the use of copper in agriculture and its benefits when applied as a bactericidal and fungicidal contact surface.

This company focuses on research and innovation in agriculture and focuses its efforts on the development of products that allow the prevention and mitigation of fungi, bacteria and viruses that cause diseases of plants and trees.

Agricoch has created the "Poda Sana" device, which seeks to ensure that there is an effective seal with pulp for each pruning cut, thus preventing the entry of pathogens that cause diseases associated with the wood of the plants that affect the quality of the fruit. its consequent loss of yield, which may result in discarding this fruit for export due to non-compliance with the parameters required at the market level, a situation that economically impacts farmers.

This device is attached to the pruning shears, dispensing the paste at the same moment in which the cut is made. Additionally, the company seeks to make the device compatible with the preferred pruning shears brand of each producer.

This product already has the support of Hortifrut, Corfo and Meet Latam and has been subjected to various tests obtaining successful results in blueberries with a view to testing in other fruit trees. They are currently finishing the prototype phase and begin to fine-tune the manufacturing details. The next challenge for this company is to be able to market this product during the next season, Hetz said.

Another of the companies that won this Challenge was Intelproduce, a digital platform for the integration and standardization of information and services for modern agriculture, manages to bring together multiple suppliers or sources of information from the agricultural industry to simplify access to producers and exporters.

It facilitates to the agricultural startups suppliers the distribution and commercialization of its services from a single place (Marketplace of solutions), accessing of easy and unified way to diverse sources of information that can visualize in a Control board by means of widgets organized in dashboards, reducing the consultation times on multiple platforms.

It has an alert center that allows to concentrate in one place the notifications generated by multiple agricultural information services. It also has an application manager from which producers and exporters can manage the subscription and access to the different services available.

In Intelproduce you can find information services about climate, price (wholesale and retail), volumes and stock, shipments, satellite images, drone images, irrigation monitoring and also gives the possibility of integrating the customer's own systems to visualize Productive, administrative, commercial and financial information.

This initiative arose due to the explosion of startups of monitoring, information and measurement services for the agricultural sector, this has allowed to provide a greater amount of data and tools that allow fruit producers and exporters to make the best decisions in relation to your crops. The problem arises because each of these providers has developed its own platform to present their information and / or services which has forced users to have access to multiple applications to obtain the information they need, said Gonzalo Mena, Commercial Director of the company.

We are currently in a stage of commercial validation of our closed beta and we have finalized our first sales, we intend to launch our open beta within the next two months so that all producers, exporters, suppliers and startups in Chile, Latin America and the world can use it, Mena said.

Among its next challenges are to grow nationally and get to install your product in the European market, Asia, China and Japan.

Blue monster, is an online platform for online monitoring of easy access and installation, which measures the levels of water in deep wells in addition to other variables, in order to generate traceability and predictions of water availability, these prove to be fundamental for a producer agricultural can plan their next season or so that a Plant Manager can ensure the operational continuity of this.

It presents the data to its users through a friendly interface, allowing access to current and historical information on water levels available through its display on smartphones and browsers.

Currently, several applications have been validated in wells on the Blue Monster platform, which deliver the dynamic and static water level online. It consists of a hydrostatic pressure sensor that is installed in the bottom of the well allowing to measure the relative pressure exerted by the water column on the sensor. Irrigation applications have also been studied, which deliver the percentage of moisture present in the soil online and consist of the installation of humidity sensors under the soil or pot, it allows to generate alerts that identify when the irrigation plan of the producer is not is properly fulfilling, efficiency and traceability of the irrigation system.

Great challenges are coming in the agricultural sector for us, on the one hand we have to improve production processes to be able to export to more demanding markets and on the other hand the drought that has affected the agricultural sector in recent years forces us to be more efficient in use of critical resources such as water.

During the 2018 we have incorporated improvements in the design and we are producing the sixth version of the measurement nodes, this version is the one that will allow us to mass-produce the hardware and lower the production cost.

For 2019, a growth in the production of these devices is expected, as well as the development of our platform with the consequent incorporation of early adopters (first users), in addition to having predictive functionalities. By 2020 and the years to come, we hope to have a consolidation of the company, scale in sales nationally and explore new markets, said Tzu Chiang Shen, Software Architect of the company.

This project has obtained the first places in Fair of technological innovation 2018 and Agrotech 2018, besides having been one of the selected companies in Hortifrut Challenge.