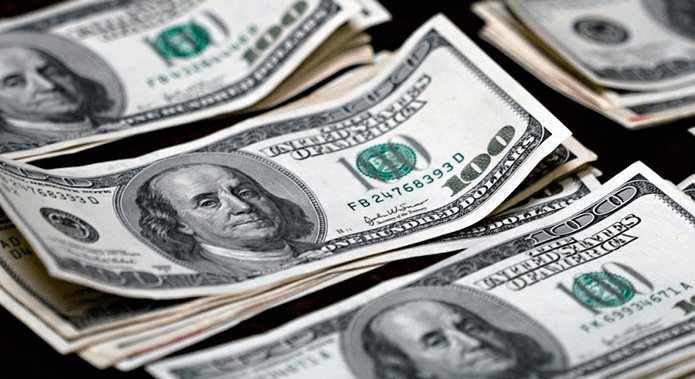 In 2017 the main international currency lost many points of value against the Chilean peso, falling from the 670 to the 615 pesos in the period, which has caused uncertainty in the markets, especially in the field of exports.

Almost three years ago the dollar had not had such an important decline, falling from the psychological barrier of the 600 pesos. It was the 19 of May of 2015, when the dollar experienced a value similar to the current one, standing at the 597 pesos. Since that date of 2015, however, had a sustained rise until reaching 730 weights 18 January of the 2016.

After this high point of the US currency a permanent fall of the dollar was generated, which continued throughout 2017, until reaching again under the barrier of the 600 pesos in the second week of February of this year, reaching the 597 pesos the 9 of February last.

The behavior of the dollar, as far as this 2018 goes, does not maintain variations in its downward trend or stagnation, with no signs of a recovery or a significant upward trend in the short or medium term.

Experts predict that this reality will remain throughout 2018, reaching only to recover some points on the 600 pesos in the rest of the year. The Economic Expectations Survey (EES) and the Financial Operators Survey (EOF) were corrected downwards in their latest projections. The EEE fixed in 620 pesos the price of the dollar to 11 months (from 640 previous) and the EOF bet because it will reach the 610 pesos at the end of the year (from 615).

This loss of value of the dollar is a subject monitored daily by the Central Bank (BC), for the direct effect it has on its main function as a state entity, which is to control inflation and keep it at an index of 3% in the next two years. years. Among economists, analysts and academics are varied opinions on what to do with the behavior of the currency and the role that the BC should play to avoid costs in inflation.

"The most important factors that are driving the price of the dollar are the portfolio investments that are taking place in the Chilean economy, the increase in the price of copper, the expectation of a new copper boom and the weakness of the dollar in international markets.", Says the dean of the Faculty of Economics and Business of the University of Chile, Manuel Agosin.

Bloomberg, reveals that since the 26 in June, the so-called multilateral Dollar DXY (Dollar Index Spot), has fallen almost an 7% and since December a 3%, figures very similar to the behavior observed in Chile.

The DXY is the index that daily compares the behavior of the dollar against the other six major currencies in the world: the euro, the Japanese yen, the pound sterling, the Canadian dollar, the Swedish krona and the Swiss franc.

The conclusion is that the Chilean peso has appreciated strongly against the dollar, but not with respect to other currencies, due to the generalized depreciation of the US currency. The relationship with the other currencies is similar to how it has been with the peso. There is no evidence of a Chilean peso misaligned with respect to what happens in the rest of the world. What does exist is an improvement in the cyclical conditions of Chile, caused mainly by the price of copper, of USD 3,2 the pound and rising, and by the environment of internal expectations of growth of the country.

Finally, the exchange rate is a reflection of the cyclical conditions of the economy and when the country does poorly or is facing complex scenarios, the dollar rises. On the contrary, the dollar tends to fall.

April 19 in Grand Monticello: A Seminar for the new times ...

Safety in Berries: viruses to the fore

UNITEC: the ideal partner to win addictive challenges in the global market