Preparations in Puerto Ventanas and start-up of the 'Blueberry' service in Coronel are the news. 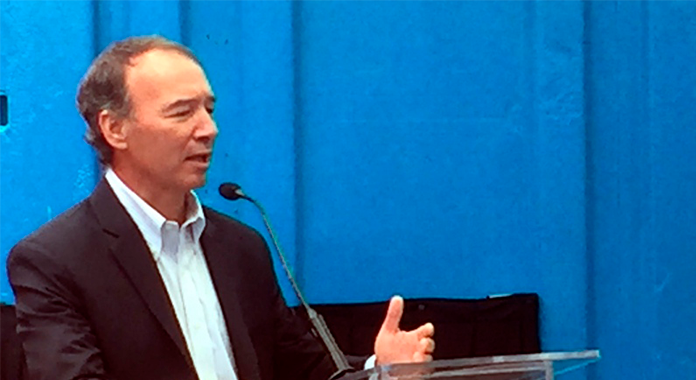 The 2021-2022 fruit export season in Chile is undoubtedly a bad memory for the sector, which suffered high tariffs, a shortage of available vessels and saturated ports that forced improvised shipments in ports as far north as Coquimbo and in the south. in Talcahuano. However, the mood is looking better for the recently inaugurated 2022-2023 season, which had its initial act at the Terminal Pacífico Sur (TPS) Valparaíso on November 22.

in the opportunity Iván Marambio, president of the Chilean Fruit Exporters Association (Asoex), Along with expressing himself as "optimistic" regarding what this season will be like, he explained that a major difficulty has been logistics, which was greatly affected by aspects such as the pandemic. "What we want to do today is recover that level we had in the past," he said.

marambio He highlighted the preparatory work of coordination between public and private organizations and also the diversification of export ports. "This season we have diversified the ports in an important way because we started working for blueberries mainly in Coronel with what has been called the 'Blueberry Express', which is a boat service that reaches the east coast of United States and we are going to start operating in Puerto Ventanas, which is a milestone for fruit growing." He specified on this last point that “we believe that it will take place within the next few days. The first ship would be the penultimate week of December and there would be 15 calls,” he anticipated.

In addition, along with indicating that by diversifying the ports, pressure is mainly relieved from Valparaíso and San Antonio, he stressed that "there is a commitment, at least from the port of Valparaíso, to have more ship calls."

Another important point to ensure the export of fruit is that there is the available capacity of ships and refrigerated containers. In that area, Christian Seydewitz, manager of Hapag-Lloyd Chile stressed that for the service 'Cherry Express' "in addition to the traditional ships that we have weekly, we also implement three extra loaders to be able to get as many cherries as possible before the early Chinese New Year." In this regard, he explained that the additional capacity committed reaches close to 1.800 TEUs that complete a total between 4.800 and 5.000 TEUs.

But not everything begins and ends with the export of cherries. "Then comes the rest of the fruit [served through the Asia Express service] and we continue accelerating until week 13 and there, depending, we discuss with customers if the season is coming longer and if we have to spend more weeks," it states.

A sensitive issue is always that of rates, this time has not been the exception.  Ivan Marambio On this point, he maintains that "fruit in Chile today is in crisis and has a very serious margin problem." This is in reference to what he considers "the announcement of the rise in sea freight especially for the cherry season." He added that "we understand that there is an increase compared to the previous year of 20 to 25%" and that as "Asoex we find it surprising and out of time".

From the shipping field the look is different. This is how he expresses it Christian Seydewitz, who indicates that “the rates are set by the market, so we are seeing supply and demand. In this particular case of cherries, we are making an additional investment [in extra loaders] and that, let's say, has a high cost for us." However, he expresses his confidence that the market will soon normalize and that there will be a good season.

Every day has its eagerness and apparently, also every fruit season. This was made clear with the stoppage of several trucking unions throughout Chile, an issue that did not go unnoticed at the time. Ivan Marambio, along with urging the carriers and the government to reach an agreement as soon as possible, stressed that “the fruit does not wait; One day late in removing our fruit affects its quality upon arrival at our destination ports. The other thing to keep in mind is that the boats have a precise itinerary that must be respected; a ship that misses its opportunity implies that the entire logistics chain is broken”.

In this area, he acknowledged that one of the so-called "logistics nodes" in which work is being done is the possibility of setting up a third (night) shift for dispatching trucks. "This is a point that is being worked on and in which we hope to have a solution in the short term," he said.

He delved into this point Daniel Fernández, president of the Chilean Maritime and Port Chamber (Camport), indicating that "if we have all the logistics port infrastructure available 24/7, it is not possible that we only have two shifts of trucks and not three as usual two, three years ago and that is due to security issues."

“We obviously understand the truck operators…they steal their cargo, the drivers are at risk. We understand it, but we are available to work with the authorities as we can to provide better security conditions so that this third shift can operate, ”he added.