Twelve blueberry growers from the Netherlands, Germany and Belgium have joined together through a joint venture of Research, Development and Innovation (R & D + i), with which they will develop an innovative plan in the field of smart agriculture, robotic harvesting and weed control 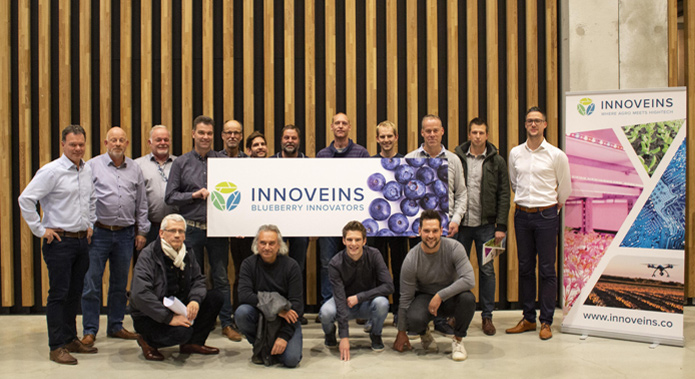 Blueberry Innovators has a cultivation area of ​​300 hectares and its shareholders actively work in the cultivation of blueberries, their production and marketing. The Netherlands is one of the 5 European countries with the largest area dedicated to the cultivation of blueberries. The importance of innovation in processes and products is enormous, not only in order to lead, but also to continue improving. Erik van de Vin, manager of Blueberry Innovators, explains: "In the coming years, we will face a series of challenges in terms of expansion, labor, efficiency, biodiversity, crop protection, sustainability, soil diversity and quality of the water and production. To adequately respond to this, cooperation is crucial and innovations are necessary. Within Blueberry Innovators, farmers have taken the helm. All our innovation activities are aimed at making a future-proof and economically sustainable business model for the participating farmers. "The twelve participating blueberry producers have opted to jointly manage their research and development needs, through their own company of R + D + i. It is an external department of innovation of their companies where products and services are designed in the field of robotic harvesting, intelligent agriculture and robotic weed control, with a view to their possible commercialization. The producers are legally organized in a limited liability company and all are, therefore, shareholders of Blueberry Innovators, several of them having been elected as directors of the company.

Blueberry Innovators has already started with the first innovative measures, which will be extended during the next year. In collaboration with the Higher Schools of Arnhem and Nijmegen, in the course of this year, started an investigation on automatic detection and recognition of weeds. Moreover, at 2019, it is expected that several cooperation agreements will be ratified in the cultivation of blueberries, destined, among other things, to the manufacture of a collection robot and the application of big data. Cooperation is essential for all Blueberry Innovators development programs, the collaboration between farmers, technicians and researchers that will ensure that innovative products and services are not simply functional, but can also be efficiently implemented in the production companies in a commercial way. attractive

In September of 2018, in the commune of Villa Alegre, the "Berries Maule Extension Program" was launched, a project to support the production and marketing of raspberries and blueberries from the Maule Region. The program is financed by the regional government of Maule and the Foundation for Agrarian Innovation (FIA), and is executed by the Institute of Agricultural Research (INIA).

This initiative will last three years and will focus on aspects of extension, training and research-innovation aimed at producers, agroindustries, professionals and technicians of the sector.

The regional manager of the FIA, Robert Giovanetti, highlighted the fact that the Program incorporates three fundamental aspects such as extension, training and research-innovation. He explained that "from the point of view of innovation contributions will be delivered to diversify the presence of berries in the region, which should be implemented by next January". He added that innovation consultancies are also considered to bring experts to help see innovative solutions to boost the sector, and a tour with producers to see other technologies in use that can be implemented on their premises, according to INIA.

According to figures from the Fresh Fruit Bulletin, prepared by the Office of Agricultural Studies and Policies (Odepa), in the 2017/2018 season, Chile exported USD 629.905 of fresh blueberries to the world, a value that increased by 16,1 compared to the previous season ,18,7%. The United States, as the main destination, increased its purchases by 1,8%, China, did so by 4,6% and the Netherlands, by 3,9%. United Kingdom decreased by XNUMX%.