Peruvian blueberry exports grew in volume 22%, but in value only increased 2% in 2020 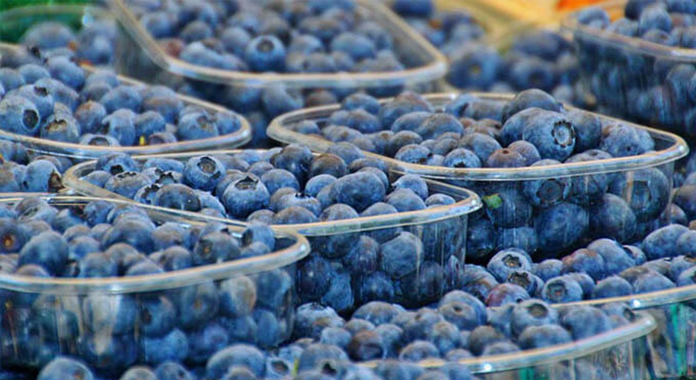 Peruvian blueberry exports showed extraordinary growth in the last decade, with development rates above 45% each year. Thanks to its good performance, the fruit managed to position itself as the second main product of the Peruvian agro-export basket. Likewise, in 2019, the good reception that the fruit had in the international market allowed Peru to become the main supplier of blueberries in the world, with 23% participation, displacing Chile, a country that had maintained the first place by more than ten years.

In 2020, Peru widened the gap in global leadership by exporting 150.417 tons of fresh fruit, for US $ 824 million, while Chile failed to exceed US $ 600 million. Although it is a great achievement for the country, it is necessary to bear in mind that 2020 was a year of great challenges for the fruit. Peruvian blueberry exports grew 22% in volume, but barely grew in value (2%). This, because the explosive increase in supply has affected prices down.

During the first quarter of 2020, which coincided with the end of the 2019/2020 campaign, blueberry exports totaled 8.165 tons for US $ 39 million, 20% less in volume and 53% less in value. In this period, shipments were affected by the international context, as the main destinations of the fruit had closed their borders to prevent the spread of Covid-19. Despite the fact that the situation in Peru was complicated, due to the restrictive measures imposed by the State, these did not affect blueberries, since they coincided with the months in which fewer shipments were made.

Peruvian companies quickly adapted to new national and international demands to start the blueberry campaign (which runs from July to February). During the beginning of the campaign, between July and September, blueberry exports totaled 53.176 tons for US $ 336 million, 64% more in volume and 35% more in value compared to 2019. The good results encouraged suppliers to increase your shipments, without realizing that it would have a drastic effect on prices.

In October, the peak month of the season, berry exports totaled 42.239 tons for US $ 191 million, 37% more in volume and 9% less in value. This was the first time in history that blueberry shipments registered a drop in value during the peak of the season. During that month, the price of blueberries fell to US $ 4.53 per kilogram, 34% less compared to 2019. The loss of value of the fruit caused a change in the behavior of companies, which restricted their shipments during the following months to avoid pushing prices down further.

Thus, between November and December, blueberry exports reached a volume of 45.909 tons for US $ 252 million, 3% more in volume and 5% less in value compared to the previous year. Due to the contraction in supply, prices managed to recover to reach US $ 5.49 per kilogram, 7% less than the previous year. However, the growth achieved was not enough to improve results and the value of the fruit continued to decline.

During 2020, Peruvian blueberry exports were concentrated in three places: the United States, with a 52% share; The Netherlands, with 27%, and China (includes Hong Kong), with 11% participation.

Peruvian blueberry exports to the United States totaled 77.918 tons for US $ 414 million, 11% less in volume and 10% less in value compared to 2019. This market was the most affected by the higher volumes of the fruit, which is why which the country's authorities have been considering restrictive measures on the Latin American supply. Regarding prices, the North American market paid US $ 5.31 per kilogram for Peruvian blueberries, 19% less than the price obtained the previous year and 3% less than the average price. In this market, the main blueberry buyers were Hortifrut Imports Inc., with a 24% share, and Camposol Fresh USA Inc., with 18%.

On the other hand, 40.464 tons of Peruvian blueberries were shipped to the Netherlands for US $ 217 million, 49% more in volume and 21% more in value compared to the previous year. This market emerged as an alternative to the loss of value that began to be observed in the North American market. The prices obtained for the fruit in the European country were US $ 5.36 per kilo, 19% lower than that obtained in 2019 and 2% lower than the average price. In this market, the buyers of the berry that stood out were Camposol Fresh BV, with 14% share, and Driscoll's of Europe BV, with 10%.

Finally, Peruvian blueberry exports to China reached 17.027 tons for US $ 102 million, 32% more in volume and 17% more in value compared to 2019. As in the previous case, the Asian country was an alternative to to the problems caused in the North American market. The price in China was one of the highest during 2020, the Peruvian blueberry was quoted at US $ 5.98 per kilo, 12% less than in the previous year and 9% higher than the average price. In this market, the main buyers of the Peruvian berry were Zhejiang Oheng Import & Export Co. Ltd., with 22% share, and Shanghai Hui Zhan Int., With 17%.

In 2020, the main blueberry exporting companies were those that make up the Hortifrut group, with a joint 24% stake, and Camposol SA, with 16%.

For its part, Camposol SA concentrated its shipments in two markets: the United States, with a 62% share, and the Netherlands, with 28%. This company reduced its market share by 7%, compared to 2019. Regarding prices, Camposol obtained US $ 4.33 per kilogram, one of the lowest. Like Hortifrut, Camposol mainly served the demand of other branches that the company has around the world.

Covid-19 is accelerating the adoption of technology in logistics