China marked a rise in its exports in July, but projections indicate a gradual decline in the curve. 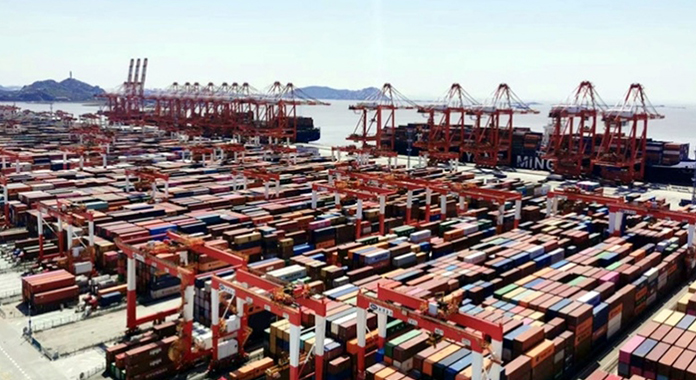 China's total trade surplus reached an all-time high of US$101.260 billion in July, compared with US$97.940 billion in June. China's export growth continued its upward momentum to beat expectations in July by growing 18% from a year earlier to $333.000 billion, compared with 17,9% growth in June, according to data released by Customs. from China. The July figure beat expectations for a 16,2% rise, according to wind, a provider of financial information services in China.

Imports, meanwhile, remained weak, growing just 2,3% year-on-year in July to $231.700bn and marking a 1% increase from June, well below the 4,5% rise forecast, leading the total trade surplus at a record level, the latest official data showed.

China's exports, driven largely by strong demand from the US, have certainly been a bright spot during the pandemic. However, there are signs that US consumer demand is not sustainable. Furthermore, reports from manufacturers suggest that the resilience seen in China's export data may fade.

It should be noted that the aforementioned boom in Chinese exports has been partly favored by price inflation, as well as by the reactivation of Chinese manufacturers that compensated for the delays of the blockades due to the pandemic and the orders that were advanced. in light of continuing supply chain distortions, but there wouldn't be much more to cut. This would spell trouble for China and would also explain why container shipping rates continue to fall.

In fact, this decline has already been felt by Chinese manufacturers in all sectors (from Christmas decorations, clothing and tents), who say that orders from foreign customers are slowing down, with some forecasting flat demand at best. cases compared to last year, as reported by Bloomberg News.

Such is the threat that the Central Bank of China unexpectedly cut its interest rates in order to boost an economy burdened by Covid lockdowns adding to other more worrying developments, including:

Thus, "the general expectation is that the growth of (Chinese) exports will slow down in the coming months and it is possible that it will reach negative territory by the end of the year," he told Bloomberg, Larry Hu, head of China economics at the Macquarie Group. "Still, the decline in demand for Chinese-made products will be gradual, rather than collapsing," he said.

All of the above would imply that US ports see less retail cargo income in the second half of the year, according to the perspectives of the National Retail Federation.

This process also coincides with a shift in global consumer spending away from goods (predominant trend during the pandemic) towards services, as travel demand increases in many parts of the world. Given this, Big Retail Players like Walmart and Target are slashing prices on goods like apparel and home goods, even as they charge more in other categories amid rising US inflation.