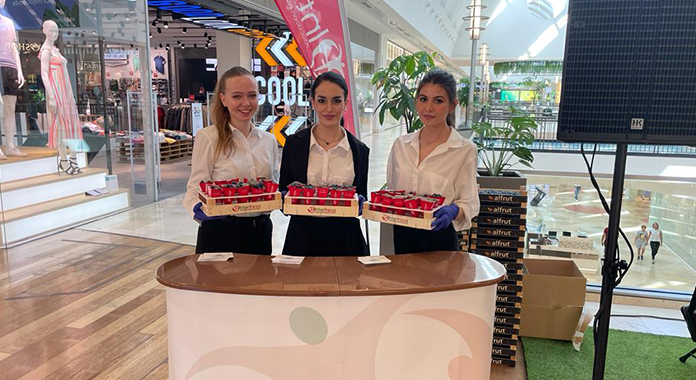 INTERFRESA -the Andalusian Strawberry Interprofessional Association- continues with its plan to relaunch the blueberry promotion in the national market with the development of a special action in Madrid, with the aim of making the special flavor of this fruit known in the Spanish capital and disseminating its many healthy values.

blueberries to your health was restarted, after the stoppage of the pandemic, last April in Malaga, where 200 kilos of this super fruit were distributed to continue a few days later at the Huelva Book Fair, with great acceptance by children and adults, a public to which the Interprofessional wants to convey especially the healthy benefits of blueberries. Today was Madrid's turn. In the intu Xanadú Shopping Center -one of the busiest in the capital- Interfresa has installed its information stand and is throughout the day offering free blueberry tastings.

Besides the fruit –250 kilos in total– Information material has also been delivered specifying the benefits that the consumption of blueberries brings to care for health, prevent diseases and delay aging, always within healthy lifestyle behaviors and habits.

Interfresa began with Blueberries to your health the activities of the World Red Fruits Day which was held on April 12 to make society aware of the value of integrating these fruits (strawberries, blueberries, raspberries or blackberries) into our diet thanks to their ability to protect health.

The choice of Madrid and this shopping center to start the campaign to continue with Blueberries for your health is justified, as was the case in Malaga, in the variety of consumer profiles, since the local public and foreign population meet in the same space , with a wide range of ages, tastes and interests.

The objective is make this fruit known and get the consumer to try the exquisite flavor, the large size and the sensations that the blueberry generates in taste produced in the province of Huelva are some of the objectives of the 'Blueberries for your Health' campaign. Along with this, Interfresa seeks to achieve an increase in the consumption of a fruit considered one of the superfoods that should be part of a healthy and balanced diet thanks to its many healthy properties.

Among them are his ability to protect cardiovascular and brain health, reduce blood pressure or lower cholesterol; His properties aging; its help to prevent, delay and even treat or reverse age-related eye problems, such as macular degeneration or its use as a food that helps prevent or treat urinary tract infections

Andalusia is the European region that concentrates the largest blueberry production in the European Union, with some 50.000 tons which are mostly exported to different countries where the consumption of this fruit is deeply rooted. In Spain, the demand for blueberries also grows every year, although the dissemination and promotion of their healthy values ​​may lead to an increase in consumption in the coming years. That is why Interfresa is carrying out this campaign in various Spanish capitals.