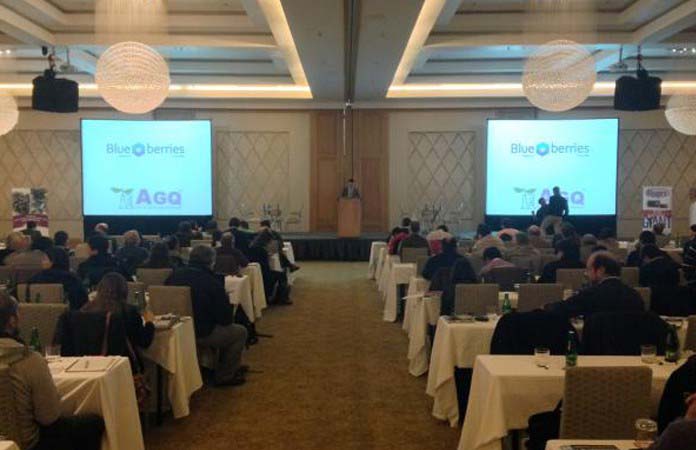 According to Euromonitor estimations, the volume of blueberries will rise 40% to 2018, exceeding the mark of one million tons. That's the reason why the industry in Chile is putting forward this kind of initiatives. In this meet up -held near Chilean capital Santiago- producers, exporters, consultants, service companies and experts from China, United States, Spain, Mexico, among others, shared national and international realities, as well as established new commercial relationships.

The topics covered during the conference included different areas of the blueberry industry, such as business opportunities in different markets, productive manipulation oriented to quality, vegetable nutrition, the best options of technology and agricultural inputs.

International experts from Spain, Mexico and United States shared their experiences in fertilization, irrigation and mowing maintenance, management and application of technology for their blueberries production, highlighting elements that are useful for the industry. According to Mr. Jorge Esquivel, CEO of Blueberrieschile.cl, the organizers are evaluating to repeat the seminar every year and make it grow internationally.

According to Mrs. Claudia Chaparro, Regional Director of the government export's promotion agency ProChile, the massification of blueberry because of its health properties led to a growth of its production in Chile for about 30% per year. This converted Chile in the second producer of blueberries in the world, with more than 10 thousand hectares planted along the country. "Now, we can highlight Chile as the world leader in exports of fresh blueberries. At the end of 2013 we exported over USD $ 474 million, which means 31% of the world's exports, "she said.

Chile exports 81% of Southern Hemisphere blueberries, and the most popular varieties are Duke, Briggita, O'neal, Legacy and Elliot, tells Mr. Esquivel. "This season 2013 / 2014, the price of our blueberries increased 10% compared with the previous season, reaching an average price of 9,4 USD / Kg", he states.

The consultancy company IQonsulting projects to growth of 5,4% in the planted surface to 2016. According to Mr. Esquivel, this increase will help the food security, but the quality of that volume will help the industry to grow successfully in the long term. "Another positive factor will be the currency recovery for producers and the industry in general, so we will expect the prices to keep stable".

Both public and private sector have established a cooperation agenda to execute different promotion projects, as Chaparro explains. This way, ProChile and the Blueberry Committee of Chile's Fruit Exporters Association (ASOEX) have been working together through the sectorial brand “Blueberries from Chile”, in order to develop strategies to position Chilean blueberries in the destination markets.

Mr. Andrés Armstrong, Executive Director of the Chilean Blueberry Committee, said to Guojiguoshu that China is a promising market for Chilean blueberries, but is needed to improve consumer awareness about this fruit, as well as creating concern among retailers about the cold chains manipulation, to always keep the fruit fresh and preserve its high quality. "We want to do business with China this and the coming seasons," he said.