Iván Frutos: "In Spain you can see cranberry tubs in almost all supermarkets" 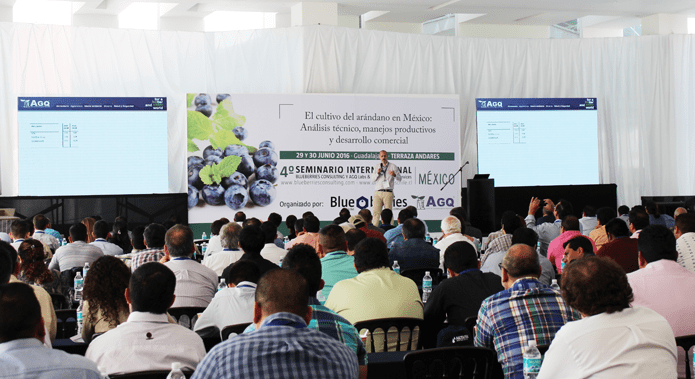 In the context of 9 ° International Seminar to be held in Huelva, Spain, we talked with Iván Frutos, PhD in Agricultural Chemistry at the Autonomous University of Madrid, about the reality of Spain and the blueberry market.

Spain is the second consumer of fresh fruit in Europe, behind Italy, with a volume of more than 100 kg per person, a figure that will vary because the consumption of fresh blueberries is increasing throughout the continent. "In Spain you can already see cranberry tubs in almost all supermarkets", Observes Iván Frutos. He tells us that until now it was a product that was only sold in processed and pastry, but the growing healthy qualities of the fruit and the best quality with which it arrives in Europe, explain that it is increasing its consumption in fresh.

Iván Frutos is a leading international consultant and has been present since the first of the International Seminars organized by Blueberries Consulting and AGQ Labs. In these he has developed and presented different topics related to the reality of blueberry cultivation in Mexico, Spain and Latin America. He has taught us about nutritional strategies for productive success and shared knowledge about post-planting soil management. He has exposed the correct application of calcium and potassium in the soil, mobility, synergies and antagonisms and has demolished myths regarding the cultivation of blueberries in the field of nitrogen application (ammonium / nitrate), pH, root growth, substrates, rates of irrigation, among others. He has also reported on fertigation management and plant nutrition in hydroponics, among multiple topics he has investigated.

He is currently a Corporate AGQ Advisor in the AGQ Laboratory, working on the nutritional optimization of berries and other crops, in Spain, Morocco, Mexico, USA, Central America, Turkey, South Africa and part of South America.

In Huelva, the soil is generally sandy, under tunnel, with intensive daily fertigation. When having temperate climate, varieties with few cold hours are used, some very vegetative. The issue of pruning is important because of the vigor of some varieties. A general concern is to manage the soil, so that the root explore the whole loin of crops, with issues of irrigation, nutrition and initial preparation.

The expert - who is also an entrepreneur and producer of blueberries - tells us that in Huelva crops we work with plastic or mesh on loins, although there is no certainty of what is better in the duration / price / temperature ratio. It ensures that interest in potting crops begins to move, because of the speed of plant growth and planting frame intensity. Your amortization may be faster.

The first productions begin in October - November and come from Morocco. Then Spain arrives, with the earliest varieties that leave since January, and in some cases December. Majority production in Spain is between January and May and arises from Huelva. In June there is still some production, but scarce, mainly because the center of Europe begins to produce with large volume. In Asturias, which corresponds to the northern part of Spain, late varieties work, which they produce in autumn, but their production volume is much smaller than that of Huelva.

Last year there was a high price of blueberries in these markets, especially at the end of May - June, as the central European region lowered its production affected by climatic problems. This has caused a very significant increase in planted area, which will mean that the blueberry will be the second berry in planted area in the province of Huelva.

The European market is the second importer of blueberries worldwide, in particular the United Kingdom and Germany, where consumption has increased significantly in recent years. Spain is no stranger to this trend and has known how to take advantage of its geographical and climatological characteristics to position itself in the first harvest market and capture the demand in the months of April to June, when production in the southern hemisphere decreases but has not yet started in the countries producers in northern Europe, positioning themselves as third producers, behind Germany and Poland. In addition, Spain acts as an entry hub, or center of operations, of production from South America, especially Chile and Argentina.