Juan Pablo Bentín: "In the dunes of Pisco, blueberries have developed very well, with high productivity"

The blueberry plantations in the fields of Pisco are gigantic green carpets that undulate over the dunes. There are thousands and thousands of plants that emerge vigorous from the hot sand, fighting against high radiation and wind, among other challenges... 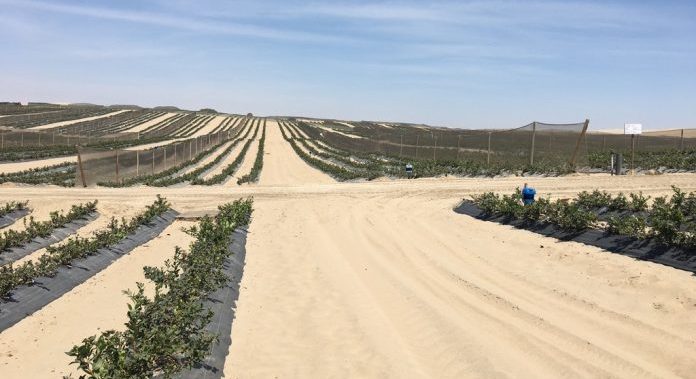 Juan Pablo Bentín, despite his youth, is one of the pioneers in the cultivation of blueberries in Peru and not only that, but he is also a pioneer in developing cultivation in a soil made up of 99% sand, in the dunes of the Pisco area, south of Lima.

Currently, without abandoning the original crops of Biloxi and other varieties, Juan Pablo Bentín is developing a project with new genetics in the dunes of the Pisco area, south of Lima. This is a large project that includes the planting of 400 hectares with varieties of the Australian Mountain Blue Orchards (MBO).

For things in life we ​​came into contact, almost by chance, with Family Tree Farms, an American company owned by the Jackson family. They have blueberry operations in MBO varieties in Peru, Mexico, California and Africa.

In that coincidence that we met, we quickly hit it off in a kind of gear, because the needs of both sides complemented each other very well. We met them in 2019 and the same year we were already shaking hands to start operations. We met because they visited us, they really liked our operation, how we did things and we got along as people and hit it off, and from there we moved quickly.

Our company for this project is called Family Farms Peru, which is a product of the partnership between Valle y Pampa and Family Tree Farms. 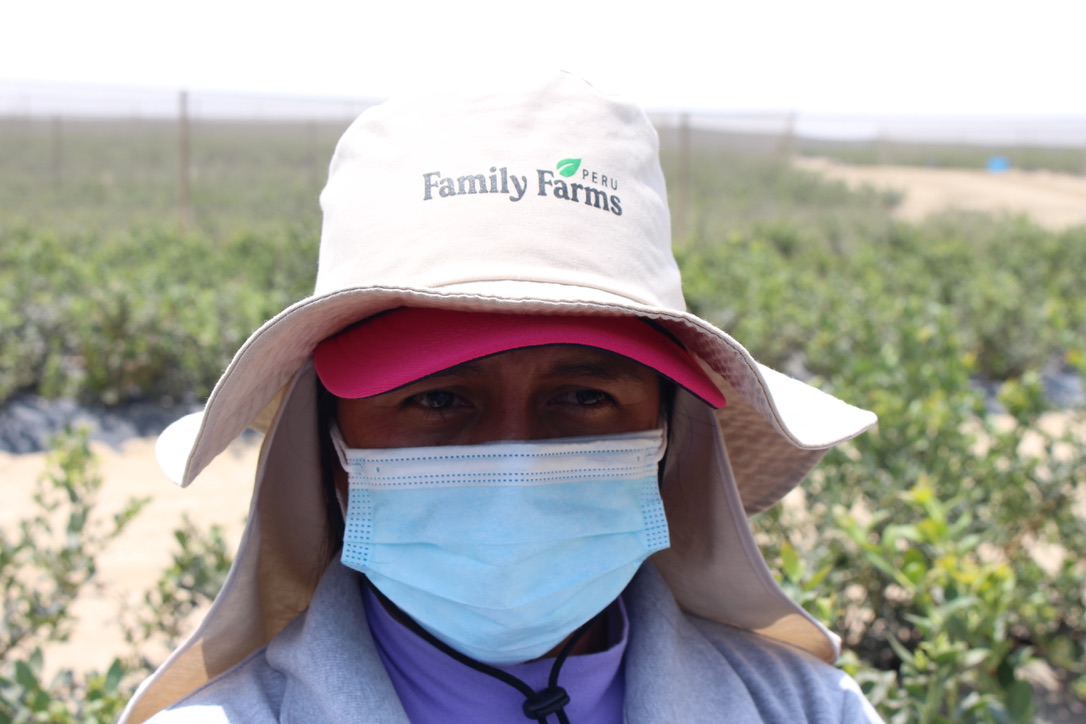 The start-up project contemplates an area of ​​400 hectares with MBO varieties, with annual growth of 100 hectares, that is, by 2023 we should have 400 hectares planted. Along these lines, as of November 2021 we have already completed 200 hectares and we are in the process of developing the third stage in 2022.

The MBO varieties begin to produce the first year, like everything in Peru, especially if they are sown in spring, because this produces a better adaptation of the plant, since the climate is more appropriate. 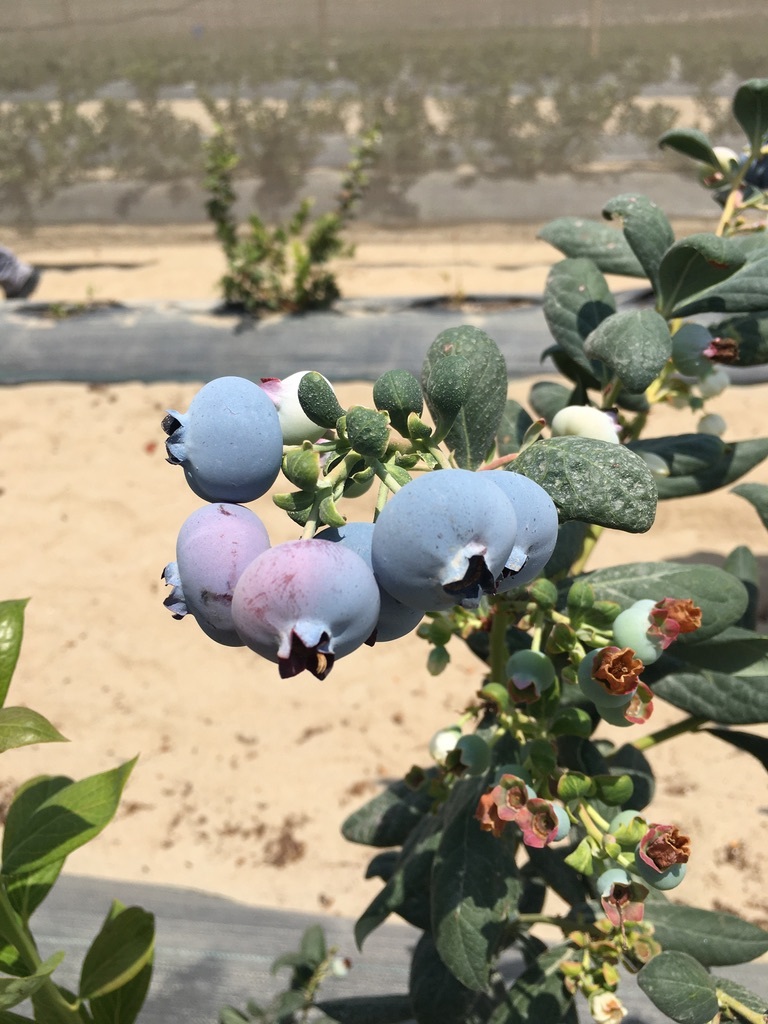 We have an incipient production because the first sowing was late, since we only started sowing in January of this year, so the experience with the varieties is not extensive, but we have not had any problems in conducting or in the response of varieties, in fact in comparative terms with other varieties the result has been better than expected.

They are planted in soil, in the Pampa California desert, with sandy soils, with 95% to 100% sand, incorporating high-quality substrates, with automated drip irrigation. In the dunes the plants have developed very well, we are quite happy.

Growing more has not been ruled out, for the moment the 400 hectares are going yes or yes.

Valle y Pampa is responsible, together with other large Peruvian companies, for the creation and development of the powerful blueberry industry in that country, which in recent times has led the world blueberry export industry without any counterweight.

At Agrícola San Gallán, Inkasberries supplies us with Biloxi, and with them we are testing the Salvador variety, which is a Peruvian variety developed by them.

Juan Pablo Bentín reports that in the old crops they are achieving very good production. "We have been gaining a lot of experience and achieving very good results, which has allowed us to safely get involved in this project of premium varieties such as the MBO."

Bentín comments that they are managing to break the myths a little, “because we have very long-lived fields and the myth is that in Peru, because it is an evergreen crop, the useful life of the crop was going to be much shorter than in other regions with temperate climates, and That, however, is not being seen, I think it is ruled out, it is true that the plant does not rest, but at the same time it has a greater capacity to rejuvenate”, he explains. 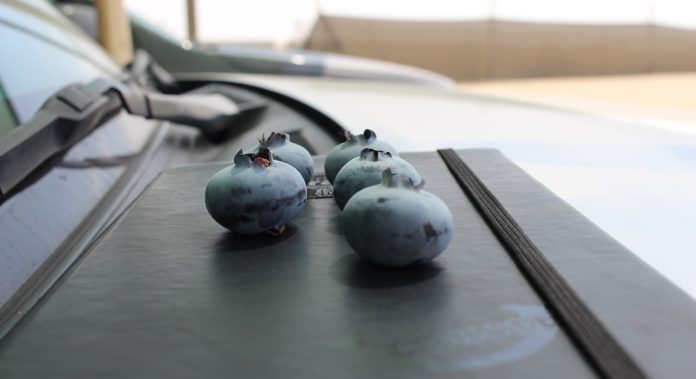 Due to the fact that the campaigns are long and that the production comes from material obtained the same year. This encourages you that if at the end of the campaign, when you go to the pruning, you have a level of plant renewal that in our case reaches 30% of vegetative material, then it is in that proportion that the plant rejuvenates with vigorous material. , ready to produce the following year…

He assures that they have the oldest plantation in Biloxi in the south of Peru. “We have had Biloxi for 10 years and we continue with it. We know other producers who resist changing it. We are constantly evaluating it. It has good characteristics, rich to eat, but if there is the possibility of changing from the Biloxi to another variety, it would be for greater productivity and efficiency. We are currently producing between 25 and 32 tons per hectare of Biloxi with the same plants from 10 years ago planted in the ground.”

Yes, the fact that we have made it produce well on the ground, in the sand, in an area that is not so conducive, that is not as good as the north according to theory, according to paper... but nevertheless it has gone very well for us in Pampa California, in Pisco.

Valle y Pampa is one of the pioneers in the commercial cultivation of blueberries in Peru, applying state-of-the-art technology, professionalizing all areas of production and consulting with the best international specialists and advisors, which explains not only the success of produce blueberries in the middle of the desert, but also the high level of quality of their fruit, which has allowed them to market it in the most important international markets, strategically planning shipments to take advantage of the most advantageous commercial windows and therefore obtain the best prices for their fruit. 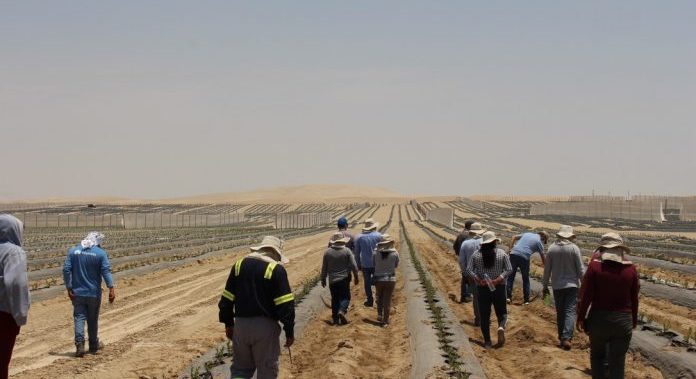 Future visit to the area

The blueberry plantations in the fields of Pisco are gigantic green carpets that undulate over the dunes. There are thousands and thousands of plants that emerge vigorously from the hot sand, fighting against the high radiation and salinity of the water, among other challenges that Juan Pablo Bentín's team and advisers have been able to successfully overcome.

Without a doubt, the experience of visiting the blueberry fields of Juan Pablo Bentín in the Pisco area is unique and unforgettable, of great wealth for anyone who is interested in learning about blueberry cultivation in the world. Experience that will be shared on the occasion of a Technical Tour to the area on March 8, in the context of the XIX International Blueberry Seminar that will be held on March 9 and 10 at The Westin Lima Hotel & Convention Center.

About the MBO blueberry varieties and the other varieties that are grown in the Pisco area, including the old Biloxi, we talked at length with Juan Pablo Bentín, which was reflected in an extensive interview that we will publish in full in the next edition of the Magazine Blue Magazine.