The agricultural season in Huelva: Strawberries and blueberries regain their momentum

The sector culminated the 2020-2021 season with a total strawberry production of 349.232 tons (t), which represents an increase of 33,7% compared to the previous season. 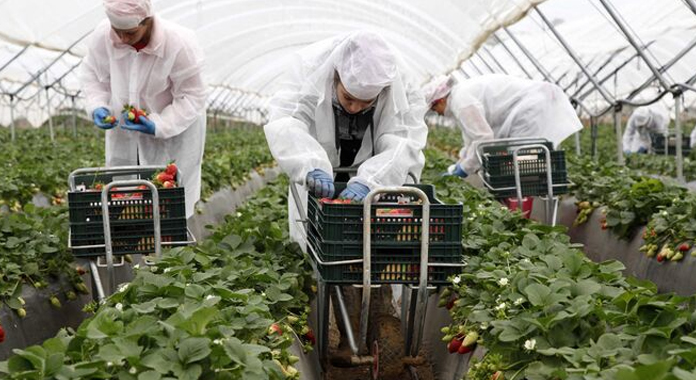 With the effects of the pandemic more mitigated than in the previous campaign but with the presence of that storm that had come to more than, under the name of Filomena, so much it brought different agrarian sectors in different territories, and without forgetting that a bad year was coming, the sector of red fruits in the province of Huelva, the most powerful in Europe by far, you can be satisfied after the closing of a campaign that has meant producing more (almost an 8% increase) and, in the same way, also generating more income than in the turbulent previous year. This year, in addition, the extraordinary situation experienced in 2020 with the Moroccan workforce has not occurred, when, due to the closure of borders due to the health crisis, thousands of temporary workers from North Africa were 'trapped' in the province.

The sector has culminated the 2020-2021 campaign with a total strawberry production of 349.232 tons (t), which represents a del% increase 33,7 compared to the previous campaign. Turnover, for its part, also experienced a similar growth compared to that invoiced in the previous season, according to statistical data provided by the associated companies, and with prices above the fiscal year reviewed.

«Workforce from Honduras and Ecuador

The procedure to bring in workers with a contract in origin for the 2021/2022 campaign of strawberries and red fruits from Huelva is already underway and is waiting for the administrations to determine if there will be a selection of generic workers and of the conditions and requirements of the pilot experience in Honduras and Ecuador. The deadline for the presentation of the documentation of the first phase within this procedure of bringing in workers was open until last August 26 and in this next campaign it will not only take place in Morocco, but also in Honduras and Ecuador, thanks to the pilot experience that starts this year. Within this framework, 250 people from each of these two American countries will arrive in the province of Huelva, that is, 500 workers for all companies and for the entire province of Huelva. "

According to Freshuelva, climatic adversities once again marked a strawberry campaign that went through very difficult times as a result of the storm Filomena, which considerably contracted production in important months of the campaign. However, the weather has favored a lengthening of the year in the province of Huelva, with the consequent recovery of production and turnover, as recent months coincide with a notable instability of the weather in Europe, which contributed to delay the campaigns that coincide in the markets with Huelva, especially in the months of May and June. Thus, the 2021 campaign had a first part with meteorological problems with incidents in the exported volume and a second where the behavior of production and demand recovered significantly.

As for the rest of red fruits, the production of raspberries Has been of 47.783 tons, registering a decrease of 1,7% compared to the previous season. Likewise, billing has suffered a decrease of 8% compared to the previous year. In this case, it must be taken into account that the raspberry planted area decreased by 10 percent this year, from 2.525 to 2.273 hectares, which explains the drop in yield at the end of the season, point out specialized sources.

Production blueberry, for its part, has stood at a total of 57.836 tons, which represents a 27,1 percent increase compared to the previous year. An increase that is also reflected in the turnover of this berry, whose surface also increased this year by up to 5,6 percent. Both Germany and the United Kingdom continue to be the main destination countries for Huelva berries, all the time. that, in the case of strawberries, and despite Brexit, British imports have exceeded French imports, which are in third place. The Netherlands, in the case of raspberries and blueberries, is the third destination for Huelva berry sales.

The volume of Andalusian strawberry exports, whose cultivation is concentrated around 95% in the province of Huelva, also increased. Specifically, from December to May it rose 2% and 16% in value, with more than 513 million euros compared to 442 the previous year. According to the data of the latest report published by the Observatory of Prices and Markets of the Junta de Andalucía, strawberry plants sold 222.884 tons in EU countries compared to 218.588 in the 2019-2020 campaign, which represents an increase of 2%. In non-EU countries, the rise has been 15%, going from 6.641 tons to 7.652 in the last season. Regarding the turnover, of the 513 million, around 490 correspond to the strawberries sold in the countries of the European Union.