The director of INIA, Dr. Iris Lobos, gives her vision on the role of the institution in the future of Chilean agriculture

In her first event with farmers' unions, the newly appointed authority attended the XVIII International Seminar on Blueberries Chile 2022, where she delivered welcoming remarks to the meeting. 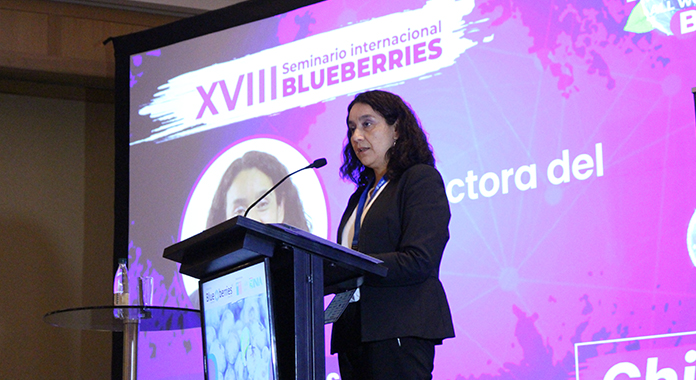 More than two weeks ago, the government of President Gabriel Boric appointed Iris Lobos Ortega, doctor in Food and Environment and renowned researcher during her career at the institution, as director of the Agricultural Research Institute (INIA). A native of Osorno, she is the first woman to assume the position in INIA's 58 years.

Last Thursday, April 7, the director delivered the words of initiation in the XVIII International Blueberry Seminar Chile 2022, which brought together important players in the Chilean blueberry industry. The meeting, which was also attended by the Minister of Agriculture, Esteban Valenzuela, was marked by issues such as the logistical difficulties for the export of fresh fruit, the technical measures that can be taken; and with special emphasis from both authorities, the scarcity of water in the country.

Chile has been in drought for more than 13 years, so policies and research to improve the efficiency of the use of this resource have become an important issue on the government agenda.

“INIA has a lot to contribute there. We must be able to transfer all the information that we have collected during the 58 years that the institution has had, to the different public (organisations) and actors that work with us”, affirms the director.

Dr. Iris Lobos comments that she has felt welcomed by the institution, but with regard to water, there is no time to waste on welcoming: “We are waiting for the most specific guidelines from the Ministry (of Agriculture), but we do know, and we are already forming commissions regarding how we are going to deal with the issue of water. We have many communes that are going to start with rationalization, and we have to be prepared. The issue of water is something that worries us a lot.

The INIA stands out internationally for its agricultural research work, which the director affirms, will be maintained during her term to solve problems in the sector, such as, for example, the development of intelligent packaging or post-harvest; “an important topic as we saw in the seminar. So we are going to continue promoting what we have, but we have to focus on water stress, climate change, and with it food security.”

The latter is of great importance for those who worked as a researcher in the National Area of ​​Food of the Future at INIA Remehue, in the Los Lagos region. “The institution has breeding programs to develop varieties resistant to water stress. The idea is to be able to evaluate that these varieties, although they use less water, do not lose their nutritional quality, which is super important” expresses the Dr. in Food and Environment.

"The INIA has a very strong component with what has to do with the transfer and extension of information," explains Dr. Lobos when asked about the arrival of innovations in the Chilean countryside.

The leader of the institute exemplifies the role of the organization with the research of new fruit varieties: "Once the study is finished, they are given the technological package with all the information, and they are also helped to replicate this in their fields ”.

The shortage of labor, the drought, the problems with the export of fresh fruit and the increase in costs are some of the problems that keep the sector in uncertainty. To this is added the political scenario, given that, depending on the result of the constitutional plebiscite, new regulations may govern this guild.

Regarding the changes that may affect the country's fruit producers, Dr. Iris Lobos is clear: “We have a key role to be able to support all the new policies that exist; to be able to download them in a way that is very easy to understand, that can be adopted. That is our focus, as I said, the transfer and extension of knowledge”.

The rise of Morocco: the attractive pole of investment for the export of blueberries