Declining bees and other pollinators threatens crop yields in the US

Apple, cherry and blueberry crop yields in the United States are declining due to a lack of pollinators, according to research led by Rutgers, the most comprehensive study of its kind to date. 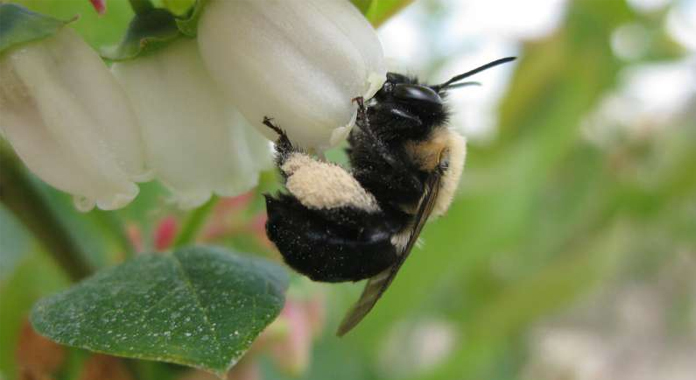 Most of the world's crops depend on honey bees and wild bees for pollination, so declining populations of wild and managed bees raises food safety concerns, the study noted in the journal. Proceedings of the Royal Society B: Biological Sciences .

“We found that many crops have limited pollination, which means that crop production would be higher if the flowers of the crops received more pollination. We also found that honey bees and wild bees provided similar amounts of pollination overall, ”said lead author Rachael Winfree, a professor in the Department of Ecology, Evolution and Natural Resources, Rutgers University School of Environmental and Biological Sciences -New Brunswick. "Managing the habitat of native bee species and / or storing more honey bees would increase pollination levels and could increase crop production."

Pollination by wild and managed insects is critical for most crops, including those that provide essential micronutrients, and is essential for food security, the study notes. In the United States, the production of crops that depend on pollinators generates more than $ 50 billion a year. According to recent evidence, European honey bees (Apis mellifera) and some species of native wild bees are in decline.

The value of annual wild pollinator production for the seven crops is estimated at more than $ 1.5 billion in the US The value of wild bee pollination for all pollinator-dependent crops would be much higher.

"Our findings show that decreased pollinators could directly translate into decreased yields for most of the crops studied," the study says. The findings suggest that adopting practices that conserve or enhance wild bees, such as enhancing wildflowers and using managed pollinators other than honey bees, are likely to increase yields. Increasing investment in honey bee colonies is another alternative.

James Reilly, a research associate in Winfree's lab, led the study, which used data collected by researchers from many universities and was part of the Integrated Crop Pollination Project funded by the USDA-NIFA Special Crops Research Initiative.

Ricardo Polis: "We cannot go back"

Political scientist Leticia Ramírez: "Agriculture is everything, it is my breakfast, my lunch and my dinner, that of my children and that of the children of all of us"