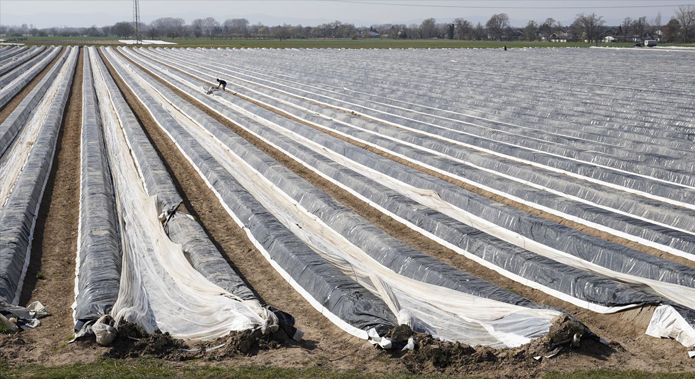 In the face of necessity, ideology pales and stubborn reality prevails. The pandemic has highlighted the crucial role of foreign seasonal workers for crops in Germany, which are endangered by the lack of foreign labor. The German countryside needs whoever works it, but seasonal workers from countries such as Poland, Romania and Bulgaria, who every year remove the asparagus with care, are now facing the entry restrictions imposed by Berlin as a result of the pandemic. Farmers' clamor and fear of supply disruption has been such that the Interior and Agriculture Ministries on Thursday reached an agreement to allow farm workers to enter, albeit limited and under strict conditions.

On March 25, the Interior Ministry ordered the closure of borders also for temporary workers and it applies to countries such as the United Kingdom, but also to Bulgaria, Romania and Austria. From now on, and according to the agreement reached on Thursday, up to 80.000 temporary workers may enter in April and May. “This is important news for our farmers. The harvest does not wait and neither does the sowing ”, indicated the Minister of Agriculture, Julia Klöckner when announcing the new decision.

Seasonal workers will only be able to fly to certain airports to avoid long bus journeys, where the risk of infection increases. The workers will be located to be able to reconstruct the chain of contacts that they maintain in case of detecting a contagion. Employers will pick up seasonal workers at the airport, who will not be able to reach the growing area on their own. They must undergo a medical examination upon arrival and will work and stay for two weeks separate from local employees also to avoid possible infections. The working groups will be as small as possible. They will keep a safe distance and when they cannot, they will wear gloves and a mask.

The Government indicates that the measures have been issued following the recommendations of the Robert Koch Institute (RKI), the benchmark in the fight against the pandemic. The RKI figures indicate that in Germany there are 73.522 positives for coronavirus and that 872 people have died.

Berlin has another 20.000 farm workers from the unemployment or student lists, in addition to the 20.000, most other Member States, who entered before the ban came into force. The government estimates that until the end of May alone, it will take about 100.000 workers in the field. "The number of workers will be reduced to the bare minimum," the interior ministry said in a statement Thursday.

The Ministry of Agriculture has also recently launched a campaign to recruit people in Germany who want to help out in the field. Under the heading "Help the country", an official website offers the vacancies and the list that appears is almost endless. So far, 42.000 have already signed up, but in total 300.000 are needed, according to estimates by the German farmers' association. Well-intentioned young Germans, farmers warn, will hardly be able to replace experienced storms from Eastern Europe. The same would happen with the refugees, among which 156.000, according to the Interior Ministry, are out of work and could support agricultural tasks, according to the DPA news agency.

The German Farmers Association has warned that some fruits and vegetables may be in short supply in the coming weeks in the absence of foreign labor. "The food supply is not in danger, but there are gaps in the production of some crops," its president alerted local press Joachim Rukwied. As a consequence, the prices of some products, such as the venerated asparagus and red fruits, will rise, he warned.

The need is so pressing that even the far-right Alternative for Germany (Afd), with a strong xenophobic and anti-immigration speech, has called for measures to allow the entry of foreign workers. Of course, workers, not asylum seekers. "The federal government is not doing enough to help our farmers, who must secure the population's supply," tweeted Afd MP Thomas Ehrhorn, who called for health checks for seasonal workers who want to come instead of being asked to prevent entry. "The government has failed to issue permits to European harvesters and now depends on being able to find local workers," said Stephan Protschka, head of agriculture at Afd. "The most important thing now is to act quickly to guarantee the entry of European workers," he added.

For days, the Interior Ministry has maintained conservations with the Ministry of Agriculture to try to find a solution that "combines the necessary protection against infections with guaranteeing harvests," Klöckner explained to the press this week. The president of the European Commission this week asked Member States to allow community workers, especially health workers, but also those responsible for bringing food to the table. "We need the people who plant and harvest our crops. We have to make sure we have enough temporary workers in agriculture, ”said Von der Leyen.

Antonio Walker, Minister of Agriculture of Chile: "I greet all those anonymous heroes who make it possible for agriculture to continue producing"

Mexico: Ministers of Agriculture of Latin America unite before Covid-19