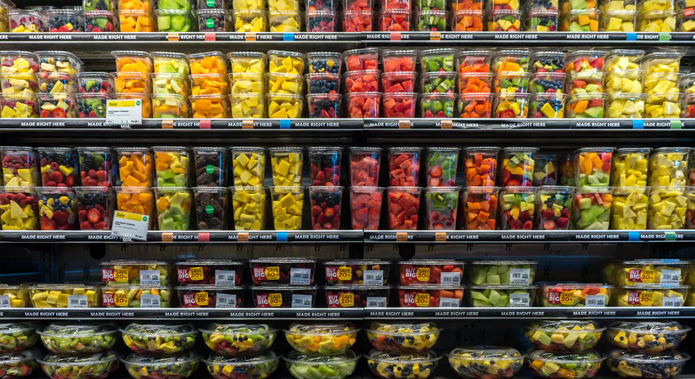 The sale of fruit and vegetables in plastic containers will be prohibited in retail businesses (both neighborhood stores and supermarkets) in Spain from 2023. It is one of the measures contemplated in the Royal Decree on packaging and waste that the Government is finalizing and that the Ministry for Ecological Transition is about to release public information, according to sources from this department. The rule also contains measures to encourage the sale of bulk and non-bottled water.

The ban on packaging in the case of fruit and vegetables will be applied to lots weighing less than one and a half kilograms. It is a prohibition similar to that contained in the French anti-waste law, which will enter into force in that country in 2022. The Spanish Executive seeks to “combat in the most effective way the overuse of packaging”, details a spokeswoman for the ministry. The same sources warn that plastic pollution "has already exceeded all limits" to justify this veto. Within and outside of Spain, several environmental NGOs, such as Greenpeace, have been launching campaigns for years under the slogan "bare the fruit" to pressure small businesses and large supermarkets to stop plasticizing these fresh products.

The department of Vice President Teresa Ribera is finishing the text of the draft, but has already held meetings with business associations and the most important environmental organizations to convey to them some of the main lines of action of the royal decree, which should also serve to transpose several European standards and thus incorporate them into the Spanish legal system. According to the information that has been transmitted, food "at risk of deterioration when sold in bulk" will be excluded from the ban on plastic containers. The list of products will be established by the Spanish Agency for Food Safety and Nutrition.

Julio Barea, from Greenpeace, agrees with the ban on plasticized fruit, although he warns that it is important to analyze “how it will be applied” in the end. Regarding the rest of the royal decree, this activist believes that the Executive is not going fast enough to "radically cut the flow of plastic pollution." “We drink plastic, we eat plastic and we breathe plastic,” warns Barea about the effects of a contamination that he describes as a “pandemic”.

The decree also includes the obligation for administrations to "promote the installation of drinking water sources in public spaces." And the duty to "implement alternatives to the sale of packaged drinks" and the "distribution of single-use cups" in public events also from 2023, according to the information provided to environmental groups.

For retailers, the Government plans measures to promote the bulk sale of fresh produce without packaging. These establishments, for example, must allow customers to bring their own reusable containers to be refilled, although conditions of cleanliness and suitability will be established by the businesses.

Among the general objectives of the royal decree, the goal is to achieve a 50% reduction in the sale of plastic bottles for beverages by 2030, always according to the information provided by the Government to the main players in the sector. And it is marked that by the end of this decade it will be achieved that 100% of the containers that are put on the market are recyclable.

In the documentation sent by the ministry to the NGOs, objectives are also specified for the promotion of reusable containers - for example, the harder plastic or glass bottles that can be used on several occasions. In the case of hotels, restaurants and cafeterias, it is proposed that 50% of the packaging sold in 2025 will be reusable; by 2030 it should reach 60%. In the case of beers, 80% is set in 2025 and 90% in 2030. And for soft drinks the goals are 70% and 80% respectively. In the case of sales for home consumption, the targets are much less ambitious: 10% of beverage packaging in general in 2025 and 20% in 2030.

One of the great battles both of this royal decree and of the waste law that is being processed in the Congress of Deputies is the implementation of a system of deposit, return and return of containers, as exists in some countries of the European Union. However, in Spain it is a matter of dispute between some environmental organizations, supporters of this model, and Ecoembes - the company in charge of managing most of the domestic packaging -, which is reluctant to start.

Carlos Arribas, head of the waste area at Ecologistas en Acción, explains that the ministry continues to leave open the possibility of urging the implementation of this system (which implies that the consumer must leave a few cents in deposit for each container, which are returned to them when the bottle returns). The text of the bill that the Executive sent to the Congress of Deputies in May was quite ambiguous and simply suggests that it can be implemented.

PSOE and United We can agreed last week a joint amendment in Parliament that serves as a guide to know what the coalition government intends to do. This deposit and return system will only be implemented in the event that the objectives for the separate collection of plastic bottles are not met. In 2023, at least 70% of the weight of the containers placed on the market must have been collected for recycling; in 2027 it will have to have reached 85%. If these goals are not met, the deposit and return system will be implemented, according to the amendment of the Socialists and United We Can. The problem is that environmentalists claim that the current system with which the percentage of recovered packaging is counted is not reliable. "The European Commission is expected to unify the way in which this matter is accounted for," explains Arribas.