Pollination may be affected if things don't warm up later this spring. 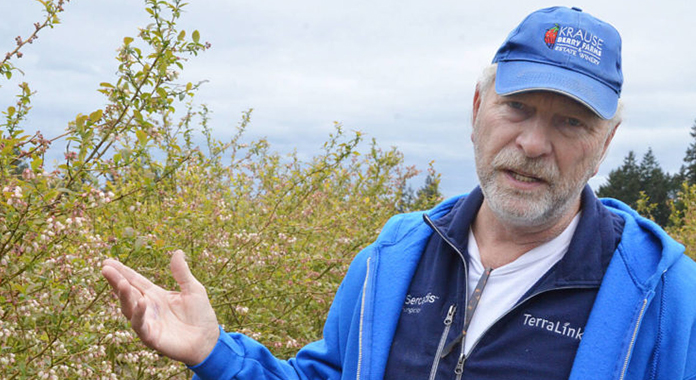 Bees aren't exactly buzzing this spring in Langley, and that poses some problems for local farmers who rely on pollination for their crops.

"I can't remember one that has been this cold for this long," said Alf Krause of Krause Berry Farm. He has been farming in Langley for decades, growing a variety of berries in the North Otter area.

In mid-May, it was still snowing in the North Shore Mountains and on Interior roads, and the ski slopes on Grouse Mountain were open.

At Langley, that meant cool temperatures and people bundled up in coats. On the farms, there is concern about some crops.

"It's too cold even for bees to fly," Krause said.

Honey bees, the kind that live in large hives, prefer temperatures in the mid to late teens before heading out to collect nectar and pollinate plants, Krause said.

But there have only been a handful of days with temperatures this high since mid-May.

On Thursday, May 12, Krause noticed that the bees above his blueberry fields appear to be mostly bumblebees, which can tolerate lower temperatures, or mason bees.

Without pollination, there will be no blueberries. However, Krause noted that cold temperatures have also slowed growth and delayed flowering. The flowers are already open on the blueberries, but everything is between 10 days and two weeks late.

There has also been quite a bit of rain. Krause noted that normally at this time of the month, he wonders if it's time to start watering, but instead more rain was in the forecast.

In South Langley, at Vista D'Oro Vineyard and Winery, the grapes should be fine, said Patrick Murphy, the viticulturist and winemaker.

"The grapes are definitely a bit stagnant, but I'm not too worried about that."

The grapes should catch up in the summer, but the farm's fruit trees could face bigger problems.

It's the same problem there as it is at Krause Berry Farm.

"I've noticed that the number of bees pollinating has dropped quite a bit," Murphy said.

That is despite the fact that there are many hives nearby.

If the trees don't produce enough fruit, they will have to supplement what they grow locally by buying more fruit from elsewhere.

It won't be a total disaster - there are multiple varieties of fruit trees, and some of them flower and are harvested later, so they should be just fine as things heat up.

At Krause Berry Farm, there has also been some frost damage to strawberries. That could be a good thing: Fewer blooms mean more widely spaced and larger berries for summer.

But it could also mean less foliage on the plants to produce the berries.

"It's too early to tell," Krause said of the season as a whole.

He noted that even if it gets much hotter in late May or June, there won't be much of a change for the plants. They will still need time to grow, so it will all happen later this year.

Good outlook as the peak season for organic blueberries arrives in the US.