Lessons from the hit in Huelva ... 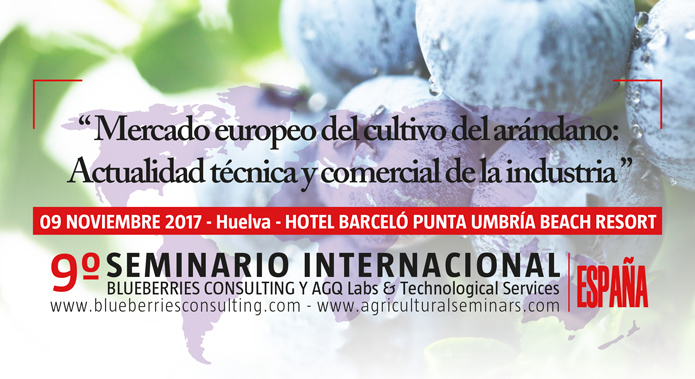 The last of the 2017 International Seminars, held last November's 9 in Punta Umbria Huelva, Spain, has been up to the expectations of both the industry and the organizers. The first success was the chosen square, which allowed to host the high number of attendees that counted this 9 ° Seminar. Because the meeting turned Huelva into the bilberry world capital, consolidating each and every one of the high points that were manifesting in the eight previous meetings organized by Blueberries Consulting and AGQ Labs.

It is premature to evaluate and draw conclusions. Only a few days have passed since the meeting, but we must underline the success of having crossed the Atlantic to gather the blueberry industry for the first time on European soil, and choose Huelva as the epicenter, because Spain stands as the main European exporter of this fruit , with some 3500 has. Spain is the official supplier for countries in high demand, such as Germany and the United Kingdom, in a very good and extensive window between winter and spring, when the north and center of Europe is under the cold of rigor.

"Huelva was chosen because it assumed international sales of more than 95% of the export of red fruits from Andalusia, the most exporting province of Spain of these crops, and by the efforts of research, innovation, production and marketing". (empresaexterior.com)

At this meeting in Punta Umbria more than 400 people attended, which shows the interest of the different players in the industry for knowledge and updated information and quality. It can also be concluded that most are aware that crop management is developed and perfected rapidly, as new technologies and research offer better alternatives to produce more and better.

"The interest for a more technified and successful management of the crop every day is greater, that is why this Seminar attracted not only people from Spain, but also from Portugal, Morocco, Italy, Holland and Poland, among others. The issues addressed were of great interest, both for the production sector and the marketing sector ". (Miguel Valero, AGQ Labs)

At this 9th Seminar, international attendance multiplied and new countries were added to the global network of the blueberry industry. Of the total attendees, almost a hundred were foreigners, coming from Portugal, Morocco, Italy, Holland, Poland and several Latin American countries, which shows the globality of the industry.

“There were many attendees from countries that I did not expect to find, such as Peru, Brazil, Portugal, Poland, Italy, in addition to Spain. I think it was an interesting opportunity as a sponsor to be able to contact many of them. The talks were very interesting. Having Cort Brazelton is always a contribution because of how updated it is… ”. (Jorge Nanjari, Sunnyridge Nurseries)

The community and local authorities participated actively in Huelva, in an activity that is usually only private competition. The presence of the mayor of Punta Umbria, Aurora Aguedo, who welcomed and invited the organizers to participate in the city, and the active participation of Freshuelva and Extenda (Andalusian Agency of foreign promotion), shows that the fruit is every day most recognized for its healthy qualities, and the industry enjoys a good image in the international social arena.

"You have to sell cranberries as if it were an emotion, because they really are, for their quality and healthy qualities, that's why they have to sell for their added value, because it's not just fruit". (Gaspar Llanes, Secretary General of Economy of the Junta de Andalucía)

The director of international development projects of SanLucar, Holger Brandt, was the one who opened the presentations with his conference on the "European blueberry market: news, challenges and commercial opportunities", in which he ratified China as a great potential market for consumption and a great opportunity for blueberry producers, "Fruit that has in Ibero-American countries as Chile spearheads in this country to have already opened commercial relations".

For Holger Brandt, «the Spanish sector must prepare to embark on this path con genetics adequate and technology to be able to export to Asia ». (agrodiariohuelva.es)

There are many lessons or readings that will come out of this great meeting. It is premature to evaluate or conclude, but it should be noted that due to the great success of this first meeting in Spain, there is already a need to strengthen these meetings for 2018.

"After the great success of this first edition in Spain, the future celebration of the celebration of a larger event with a larger format that welcomes back the entire European and global arandanero sector". (empresaexterior.com)