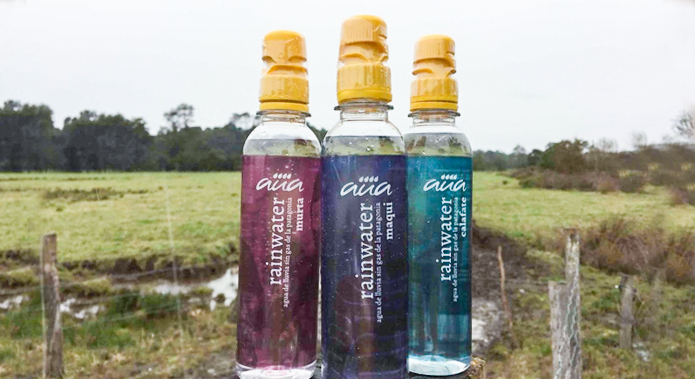 In Maullín, a modern plant was inaugurated - the first of its kind in Latin America - with the capacity to produce 40 thousand bottles of rain water with polyphenols per month. Project is driven by the Foundation for Agrarian Innovation (FIA) and seeks to take advantage of the growing demand for superfoods that the international market shows.

With the presence of authorities from the Ministry of Agriculture, FIA, Indap and ProChile, the modern processing plant of Aua Rainwater was inaugurated in Maullín, a company that, starting from rainwater and polyphenols from native berries, gave rise to a premium functional drink, rich in antioxidants.

With the co-financing and technical support of the Foundation for Agrarian Innovation (FIA), the entrepreneur Julio César Sleman developed a system for obtaining and collecting maqui, murta and calafate (with direct participation of the communities of collectors), ensuring sustainable management which also maintains the functional properties of these fruits.

On the other hand, the "harvest", accumulation and treatment of rainwater is carried out with state-of-the-art technology that guarantees its absolute purity and innocuousness. "The plant has technology similar to that of larger companies, with different micron filters and activated carbon or UV," says Julio Sleman, who is also a recognized producer of olive oil.

The maqui and murta are collected mainly in the area of ​​Los Muermos, but according to seasonal availability the company also supplies raw material from Lago Ranco (Los Ríos region), and Aysén in the case of Calafate. "The fruit is classified and then sent to treatment plants and dried by freeze drying or pop dry," says Álvaro Figueroa, technical manager of Aua Rainwater.

One of the striking features of the product is its particular double chamber lid, which has the quality of releasing the polyphenol concentrate only once the drink is going to be consumed, allowing these to retain their properties intact. "If we bottled the water and the berries already mixed, the latter would lose much of their functional attributes," explains Figueroa, an agronomist with vast experience in the development of healthy foods.

Currently the plant has a storage capacity of 1,000,000 liters, but Julio and Álvaro plan to grow in the short term. "With this we are able to fill 10 a thousand bottles per month (40 cc format) and soon we will be able to pack twice as much," says Sleman. "Our packaging capacity is 250 thousand bottles per month, but with greater automation we can double this capacity without problems," he adds.

For FIA, Aua Rainwater has become an emblematic project within the framework of its line of promotion to the development of Healthy Foods. According to the expressed by its executive director, María José Etchegaray, the initiative of Sleman and Figueroa has the value of introducing a competitive option to the functional beverage market. "And not only that. It also has an important social impact, since it generates a circuit of berry collectors in a given territory, boosting this area and generating sustainable employment ", he emphasizes.

In the same line, the Seremi de Agricultura Pamela Bertin highlighted the many qualities and benefits that the consolidation of the project will bring. "In the last four years, the Ministry of Agriculture has had as a priority to support the implementation of innovation initiatives that promote the aggregation of value and strengthen our small and medium producers. Sustainable ventures with this one, undoubtedly constitute examples that we must show, multiply and continue supporting ".

Aua Rainwater has 2 product lines: rain water with maqui, murta or calafate, and pure rain water light gas, which are being promoted through distributors to enter hotels and restaurants. "This channel is our first objective to position the brand and give value to the product", says Figueroa. "In a second phase, we want to see opportunities in retail. In parallel, we are exploring the Chinese market, where we are about to specify the shipment of a container for the month of March. Finally, we established contact with a premium water distributor for the national market and began exporting to Panama. "

Julio César Sleman concludes that this project, in addition to the mentioned attributes, poses an interesting reconversion opportunity for small farmers in the area, who in recent years have suffered the swings and fragility of traditional items such as dairy and livestock. "The agriculture of the region has in the berries an untold development potential," he says. "Consequently, the reconversion today appears as a concrete alternative for hundreds of small producers, with all the benefits that implies inserting themselves in the value chains of the agri-food sector".

Michoacán places Mexico as the fourth largest producer of berries

BLUEBERRY VISION 3 BY UNITEC: Constant research and innovation in the ...