"The Andalusian agri-food products, and among them the blueberry, must be sold as an emotion" 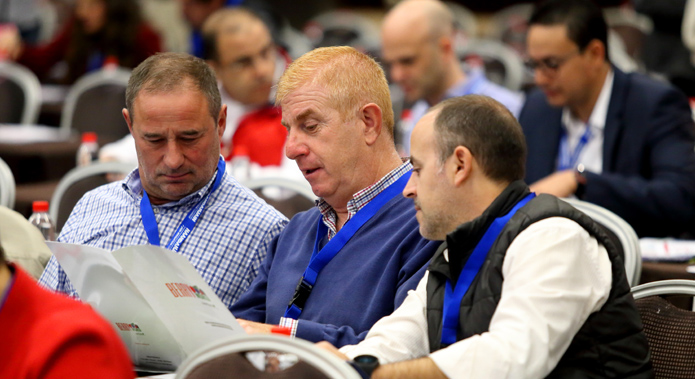 The 9º International Seminar of the Blueberry has gathered in Punta Umbría, Huelva, the European sector linked to the cultivation of this fruit, of which the province of Huelva is the most important representative in Spain and the European continent by volume of production. The seminar, of which agrodiariohuelva.es is media partners, is organized by Blueberries Consulting and AGQLabs.

The general secretary of Economy of the Junta de Andalucía and president of the Extenda Agency, Gaspar Llanes, has participated in the inauguration together with the president and CEO of AGQLabs, Estanislao Martínez; the Director of Blueberries Consulting, Jorge Esquivel and the Project Manager of Blueberries Consulting, Loreto Esquivel, as well as the mayor of Punta Umbría, Aurora Aguedo.

On the right, Gaspar Llanes.

Llanes has invited the Andalusian agricultural sector in general and the cranberry sector, in particular, to "sell as if it were an emotion, as they really are for its quality and healthy qualities, that's why it has to be sold as an added value" . For Llanes the best example of selling with emotion is the marketing campaign of the Iphone, "although it seems incredible, they have a lot in common", he pointed out.

Behind this strategy, the truth is that Andalusia has managed to put itself at the top of the national agrifood sector with 30% of production and 25% of sales, surpassing Catalonia and Valencia, Llanes pointed out. In this scenario, Huelva is a leader in both the red fruit sector and, among them, the cranberry.

Gaspar Llanes has ensured that the Andalusian countryside has been modernized significantly in recent years so that now "innovation and competitiveness" are the two most significant characteristics.

The person in charge of Economy of the Meeting of Andalusia has underlined that the blueberry has revolutionized his production, after having multiplied by 4 in just a short time, in the last years. The 90% of the Andalusian production of cranberry is located in Huelva, which also represents the 80% of the national, and "the bet is that this sector continues to grow exponentially in view of the evolution that mark the European consumer markets and with the prospect of opening doors in China. "

The president and CEO of AGQLabs, Estanislao Martínez.

Those responsible for the organization have stressed that this year international seminars have made a great leap to Europe with the organization of this meeting in the province of Huelva. The Director of Blueberries Consulting, Jorge Esquivel, explained that the goal is to capture the problems and concerns of the sector to "find solutions along the entire production chain." Starting from the technical issues and how they are resolved in each of the production areas, the seminar understands that two key issues are the new tools, the generic improvement and sustainable production methods from the optimization of irrigation to the respectful handling with the environment.

The Project Manager of Blueberries Consulting, Loreto Esquivel, has pointed out the importance of maintaining a fluid communication between the world of research and that of production, which is why the transfer of knowledge is one of the flags of his work and of international seminars. of the cranberry.

The mayor of Punta Umbria, Aurora Agueda, as a good host has welcomed the organizers and attendees and invited them to enjoy the offer and benefits of the municipality and the province to finish a productive workday.

Spain: Quality and successful attendance at the International Blueberry Seminar