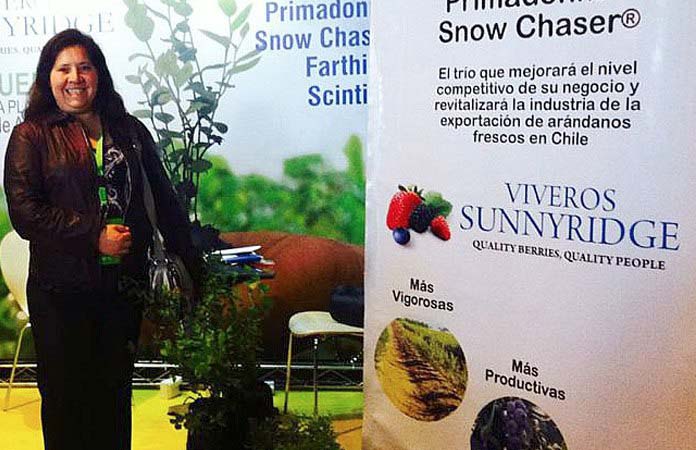 Marcela Zúñiga Lara is an Agronomist and Manager of Sunnyridge Chile Nurseries, and in the framework of the "First Blueberries Seminar: New technical trends and commercialization of the industry" made last August 28 at the Monticello Conference Center, spoke with Blueberrieschile .cl on the new challenges in terms of plant varieties, patents and the qualities of the new varieties.

"We have the license in different countries such as Brazil, Mexico, Chile and now recently in Peru. Our varieties are the best early varieties that exist at the moment and are all created, selected, certified and patented by the University of Florida. They are protected varieties and are proven in more than twenty conditions superior to the characteristics of the old varieties and therefore, represent very advantageous for the producers " says the Sunnyridge Manager.

Marcela Zúñiga explains that her plants are varieties of low cold requirement, which are mainly for places with few frosts and she assures that they are the best early varieties. "Basically where there was O`Neal you can put Emerald" he says, and he argues that this variety has a very high production potential and is being imported a lot to our country. At the moment his plantation extends from Los Angeles, VIII region, to Peru, including all the Chilean north.

We are in a more globalized world and the Chilean producer understands the new varieties, but there are also some sectors where there is a lack of information and they do not understand intellectual property, they are unaware of this issue of the protection and ownership of varieties " It relates, and highlights the qualities of plants genetically treated by applying science and technology. He believes that it is necessary to develop varieties of blueberry plants exclusively for Chile, although he highlights his as the ones that most closely match these requirements.

The best variety for Chile

"A good variety alternative for Chile has to adapt to heavier soils, to salinities of higher soils, to bad drainages, because in Chile we do not have sandy soils, as there are in Spain or Peru. A good variety for Chile must be tolerant to PH more acidic, tolerant to Botritys, must be very firm varieties and good travelers, because the Chilean fruit travels a long distance to reach the markets and these characteristics have the varieties of the University of Florida, for example, Emerald that is proven to be superior to any other Highbush variety. I believe that Emerald should replace all O'Neal plants. Producers still in Chile have O'Neal should make an effort, renew and buy new varieties to be profitable ".

The Emerald variety has potential for use in larger-scale orchards where the problem of labor is more critical. This variety allows harvest intervals every four or five days without firmness problems in the fruit. It has better adaptation to heavy or poorly drained soils due to its greater resistance to Phytophthora and diseases of the wood. Its productive potential is from 28 to 30 tons per hectare, with a caliber between 18-20 mm. In addition the variety of blueberry Emerald has very good aptitude for organic management for its great vigor and productivity.

The company Sunnyridge Nurseries was born in April of the year 2006 with the purpose of producing in Chile new varieties of cranberry and high quality. This company is a product of the union of the Chilean company Agrícola Doña Javiera, located in Melipilla, and the American Sunnyridge Farm Inc. of Florida, USA.

The American Sunnyridge Farm Inc. is the leading producer of blueberries in Florida and for more than twenty years works with the University of Florida testing advanced selections of the program of improvement of that University in their fields. Since the year 2012, Sunnyridge Farm Inc., is Dole Berries, who have continued and have continued to develop this industry incorporating new products, markets and challenges.

In Chile, Sunnyridge Nurseries markets both traditional varieties of blueberries and those produced at the University of Florida, improving the competitiveness of these fruits in the country.

Vivarium Sunnyridge has two production centers: the parent company located in Melipilla, Metropolitan Region, and the one located in Virquenco, Los Angeles, Bío Bío Region. Both production facilities are registered in the Agricultural and Livestock Service (SAG) and have the capacity to supply plants both to the national and international markets. In addition, the company was certified for the organic production of plants, which has allowed them to enter the small group of fruit nurseries certified as organic.

In recent years, the company has developed an internationalization plan that has led it to export plants to Spain and Mexico, creating subsidiaries in other countries and markets.

Professor Jorge Retamales: If there was a capitalization of US $ 4000 million for Codelco, why could not there be a twentieth part for research?