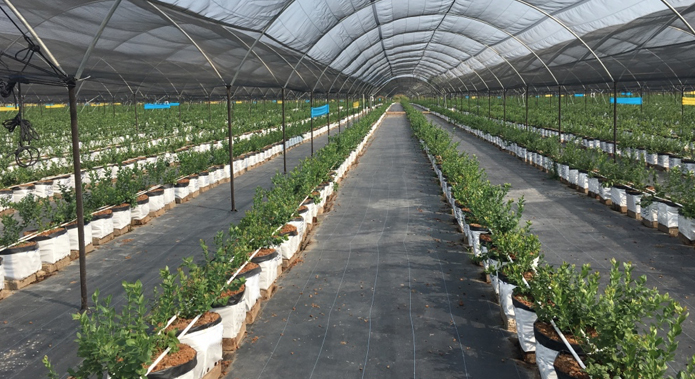 During 2019, the Agri-Food and Fisheries Information Service (SIAP) reported an area planted with blueberries in Mexico of 3.786.45 hectares, mainly concentrated in the states of Jalisco, Baja California and Michoacán, also in Sinaloa and Puebla.

Jalisco is the area

Sinaloa owns 450 hectares, 12% of the total blueberry crops in Mexico. All are in the municipality of El Fuerte. The state of Baja California has 285 hectares, corresponding to 7.5% of the total, very similar to the area of ​​Puebla, which has 233.3 hectares and Colima with 239 hectares planted.

Mexican farms have a lot of technology corresponding to modern and protected agriculture. 43.3% of the surface is cultivated in the open air, 5.7% in shade mesh and the remaining surface, which corresponds to more than 50%, is cultivated in macro-tunnels and in orchards under cover.

A total of 227 hectares, which represents only 6% of the total area, is cultivated under storm conditions, the remaining 94% have mechanized irrigation systems, which ensures the water supply through drip irrigation.

According to SIAP, in December, the production of Mexican blueberries for the 2019/2020 season exceeded 40 thousand tons. In the breakdown of these figures, the lowest yield was for the state of Guanajuato, with 5.95 tons per hectare, and the highest yield was in Sinaloa, with 18 tons per hectare.

The average rural price for a ton of blueberry in Mexico was MX $ 52.570. The state with the lowest rural average price was Sinaloa, with MX $ 32.000 per ton, and the highest price was Baja California, with MX $ 124.264. This difference in prices is due to the management modality and the quality of the fruit.

Juan José Flores, from Aneberries, is an experienced manager of the Mexican berry industry and highly knowledgeable about the different aspects of production and market behavior.

What are the figures from the last season?

What are the areas of Mexico where blueberry is grown?

What have been the main problems you have had to face?

What are the future perspectives that you see for the development of the Mexican blueberry industry?

Clearly, the Mexican industry has comparative advantages compared to other countries in the region and the world. Not only for climatic reasons, but also because the planet's main consumer market for blueberries is in the United States, that is, within hours of Mexican orchards.

Hydroponics is not the future in blueberries, it is the present!