Lleida becomes a world reference to measure how the climate behaves in semi-arid regions where there is a significant amount of horticultural crops. 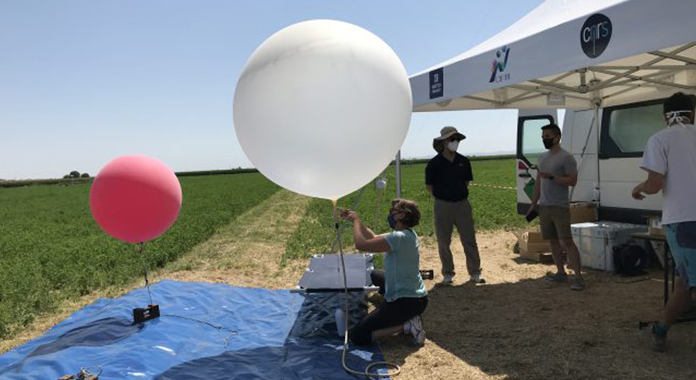 Since the summer began, several teams Scientists, universities and meteorological agencies from around the world are in Lleida to evaluate the effects that agriculture in semi-arid areas has on the climate.

The IRTA -Institute for Agrifood Research and Technology-, the Meteorological Service of Catalonia (SMC), NASA or the European Space Agency (ESA) are participating in a worldwide project, which is part of the international LIAISE project.

The choice of Lleida responds to its nature as semi-arid zone, where the water used in agriculture evaporates more than in other regions. This rapid evaporation can interfere with the atmosphere and alter the formation of low clouds and disrupt rainfall.

«Today weather forecasting models are not entirely accurate in these semi-arid areas and, therefore, it is necessary to study in more detail how the different land uses interact with the atmosphere and evaluate what effect they have on the processes that generate clouds and summer storms, "he says. Josep Ramon Miro, technician of the Area of ​​Applied Research and Modeling of the Meteorological Service of Catalonia (SMC).

And as there is not enough data to indicate how to manage irrigation in these regions in a future marked by climate change, where there will be a greater demand for water from crops and less water availability, «we need to learn to manage water and have technological tools that allow us to know in a more precise way how much we will be able to use ", expresses Joaquim Bellvert, researcher of the IRTA program Efficient use of water in agriculture.

The images provided by some satellites can be of great help to quantify the water consumed by crops - which is called evapotranspiration - and the surface moisture of the soil.

“Merging climate predictions with information on the amount of water used by crops is an essential tool for managing irrigation water more efficiently, both at the plot level and at the irrigating community level. During this campaign, different remote sensing techniques will also be evaluated to obtain more precise information and to be even more efficient in water management and, thus, ensure the global sustainability of production and environmental systems ", explains the coordinator of the mission, Aaron boone, researcher at the National Center for Meteorological Research (CNRM), during the presentation of the project.

Over the next few days, NASA and ESA will fly over the area with planes equipped with thermal sensors, radars and hyperspectral sensors, which will measure evotranspiration, surface soil moisture and photosynthesis of crops.

Likewise, they study how they can improve the models of meteorological and climatic predictions in these regions, as well as the different earth observation technologies capable of quantifying the water consumption of crops and surface moisture of the soil. In the semi-arid regions of the Mediterranean basin, such as Pla d'Urgell, water evaporates more than in other regions due to irrigation and the heterogeneity of crops. This characteristic can interfere with the atmosphere and alter the formation of low clouds and unbalance the rains.

The technician of the SMC's Applied Research and Modeling Area, Josep Ramon Miró, explained that «nowadays the meteorological prediction models are not entirely accurate in these semi-arid areas and, therefore, it is necessary to study in more detail how they interact the different land uses in the atmosphere and evaluate what effect they have on the processes that generate clouds and summer storms ”.

Along the same lines, the experts assure that there is not enough data to indicate how irrigation should be managed in these regions in a future marked by climate change and in which there will be a greater demand for water by crops and less fresh water availability.

Exploring Perceptions of Raspberries and Blueberries by Italian Consumers