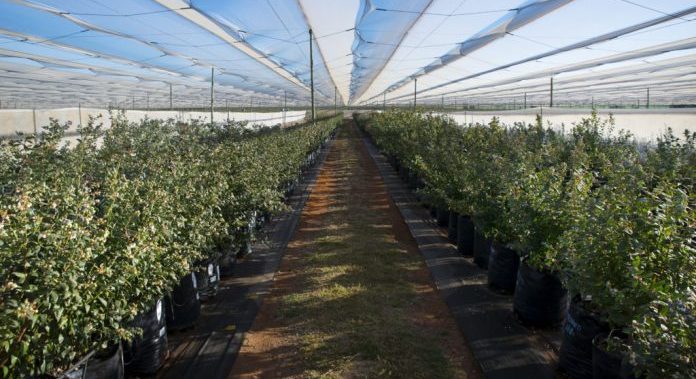 The South African Weather Service predicts that a heat wave over Gauteng in the eastern North West province, the eastern Mpumalanga Highveld, as well as the South West Limpopo bushveld will last until the end of the week without predict imminent rain.

It comes at a critical time for many fruit crops: harvesting of early stone fruit, blueberries and cherries has begun, and the heat hastens the ripening of blueberries and strawberries.

There is still no alarm among citrus growers about the amount of fruit that falls; after next month's abscission period, growers will have a clearer picture of the harvest to come, says Maritza Roux, director of technical operations at Freshworld. Load shedding plus high temperatures could have a major impact on fruit drop.

The Groblersdal/Marble Hall table grape farms are not far away, with vines that flourish in the hot sun and grow quickly, says a viticulturist. Around 500 hectares of grapes in this summer rainy area have been removed and in the meantime replanted with cash crops such as pumpkins, watermelons and tomatoes, all crops that need daily watering.

Battling a heat wave and daily power outages "isn't fun," says George Maxted of Harvestfresh, a vegetable grower. He points out that too much concurrent product could create a supply gap later on.

"The heat accelerates the ripening of the fruit before the cell enlargement process is complete," explains Koos van der Merwe, who grows very early peaches and nectarines in the Limpopo Waterberge, one of the earliest in the country. “It also makes the pressure on the fruit drop faster and it falls outside of export specifications.”

But the crux of the problem today, he adds, is load shedding: South Africa's program of reducing the load on the power grid through planned power outages.

Irrigation paralyzed by power outages
All the farmers contacted by FreshPlaza agree: Experiencing a heat wave coupled with load cuts is "a double whammy", says PP Roets of Roslé Farming in Groblersdal.

Temperatures have reached 40°C in that area, well above normal spring temperatures, and stay above 30°C well into the night, farmers say. Consequently, they would now like to irrigate more than usual, and some farmers also keep a capacity reserve for exactly these situations, but as a result of power outages, they cannot make use of this reserve.

“We keep this buffer to help us get through times like this, but then Eskom has to play along,” he says. Eskom is the state-owned electricity provider in South Africa.

Farmers lose a number of working hours every day due to power outages and are unable to complete their irrigation cycles, forcing them to irrigate at all hours when they have electricity, even at night, which brings with it other security complications.

Maintaining the cold chain has become hugely expensive, diesel generators are a sine qua non of fruit production in South Africa these days.

Packing shops operate on a stop-start schedule, wasting packing time (even if staff are doing other work like picking) which requires overtime, an added expense for agricultural businesses under severe financial pressure.

Victoria Fernández explains one of the greatest enigmas of biological surfaces

Chilean blueberry production forecast stable, but fresh exports may be down