New bioreactor developed by IRTA for in vitro plant cultures

The bioreactor reduces the handling time of plant material by 80% and, therefore, costs, as well as the risk of material contamination. 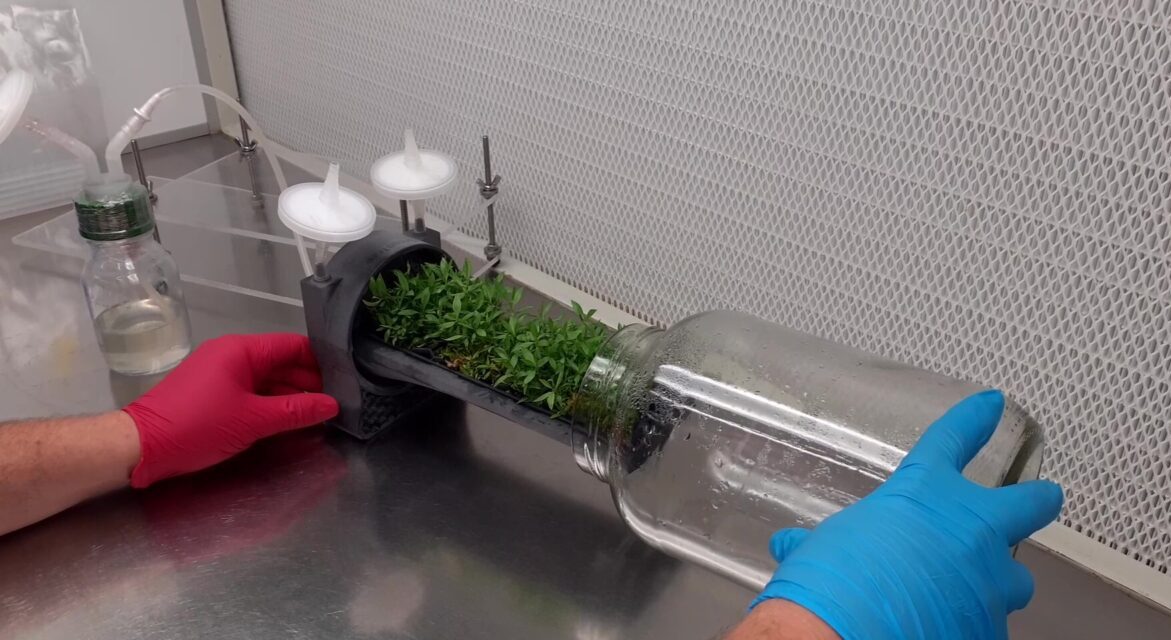 El Food Research and Technology Institute (IRTA), specifically in his plant cultivation laboratory vitro of the Fruit Growing program, has developed a bioreactor designed for propagation vitro of plants or for the production of cuttings, which has been baptized with the name of GreenTray® (patent granted to Spain ES2763637B2 and requested to the United States and Mexico). This bioreactor reduces the number of necessary operations, which makes it possible to reduce the handling time of plant material by 80% and, therefore, costs, as well as the risk of contamination of the material.

GreenTray® has a simple design, and is made up of a glass or plastic flask and a plastic tray that is attached to the flask; an inlet and outlet tube supplies the liquid nutrient. Thanks to this design, the plant material is perfectly anchored to the tray and provides safety during handling and without the need to touch it. The plastic tray with the plant material is inside the flask at all times, and is not removed until the flask is handled. When you have to operate, the entire tray is removed, without using a scalpel or tweezers, and you work with the entire tray at the same time. In this way, the handling of the sprouts is done jointly and not one by one as in the other systems, which represents an enormous saving in time and production economy.

«Labor accounts for 80% of the cost of propagation, and GreenTray® allows you to do in 5 minutes the work that is normally done in half an hour«, Comments Ramon Dolcet, IRTA researcher of the Fruit Growing program. «Removing the seedlings all at once, being able to turn them without them falling over and working them all at once are the main advantages of the system", Explain.

Mobile modules can be made with 21 GreenTray® per unit, which can be placed in air-conditioned rooms, and only removed when it is necessary to manipulate them. Altogether, such a mobile module can hold about 4.000 shoots of peach rootstock. A modular assembly of several GreenTray® units will reduce the size of the growth chambers required and facilitate the movement of flasks from the culture chambers to the sterile flow hood chambers. GreenTray® is a mechanically movable design that allows the plant material to be cut to be oriented with a blade or laser beam.

A before and after for companies

The world market for greenhouses, nurseries and flowers generated more than 290.000 million euros in 2020. The turnover of propagation represents around 250 million euros (0,1% of the total), a volume that could increase thanks to the implementation of a technology that facilitates handling, such as GreenTray®. The developers of the GreenTray® system believe that it will change the way of working in companies and will mark a before and after in the time of work required.

plant propagation vitro It is used in the fruit tree sector because of the need for continuous production of plants, the maintenance of a high sanitary level in the plants produced and to facilitate their international transport. Furthermore, obtaining good quality plants is a requirement to ensure acclimatization and growth in greenhouse conditions.

One of the main economic obstacles in the production of plants vitro are the labor costs, which can represent up to 80% of the cost of production. It is for this reason that the in vitro propagation of plants is done mainly in Asia or South America, due to their low labor costs.

The development of a module made up of several GreenTray® units will help its introduction in the new in vitro plant culture laboratories.

A product also useful in the home

GreenTray® not only has applications in the field of research or professional nursery. The device could be used as a household or restaurant appliance after incorporating a compact timer, air pump and power source. One of the applications would be the germination of seeds for self-consumption.

About the Institute of Agrifood Research and Technology

El IRTA is a research institute dedicated to agri-food R&D&i in the fields of plant production, animal production, food industries, the environment and global change, and agri-food economics. The transfer of its scientific advances contributes to the modernization, competitiveness and sustainable development of the agricultural, food and aquaculture sectors, to the provision of healthy and quality food for consumers and to the improvement of the well-being of the population. IRTA is attached to the Department of Agriculture, Livestock, Fisheries and Food (DARP) of the Generalitat de Catalunya.

Australia: "A large part of our goal for the next 20 years is to increase exports"