An intense tour of the country was carried out by a group of journalists from important food media in China, with the purpose of knowing, first-hand, how and where they are produced, and the way in which they are exported, the products that reach the Chinese consumer table 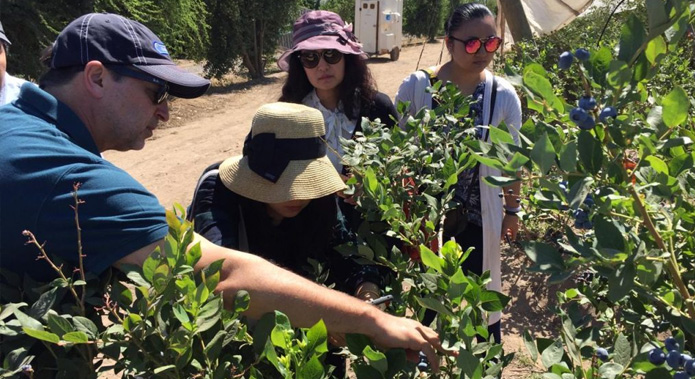 The visit began on Monday with a breakfast at ProChile, where they were received by the highest representatives of the sectoral brands that organized the activity: Fruits from Chile, ChilePork, Chile Olive Oil, Chile Prunes, and Chile Nut, and which had the support of ProChile.

In the afternoon the journalists participated in a cooking show, where Chef Rodrigo Marañao made various preparations based on fresh fruits, meats, dehydrated plums, nuts, avocados and olive oil, which were accompanied by national wines. The event began with a cocktail where salmon toasts with plum sauce, avocado morse with shrimp, ginger chorizo ​​ceviche, pil pil pork loin and malaya stuffed with nuts were served. All this accompanied by natural juices, wines and blueberry pisco sour.

The cooking show menu included entrees of salmon carpaccio with mustard salt and mustard soup with rice pasta, and roast pork leg. Among the options for the main course, the following stood out: a grill with a mix of cuts of pork, salmon, sausages in the shell, grilled avocados and a mix of roasted fruits. Meanwhile, the dessert was topped with pisco cherries with walnuts and cream; cranberry mousse with kiwi, and nectarines and grapes.

In this regard, Ignacio Caballero, ASOEX Marketing Deputy Manager pointed out: "This type of actions, in addition to being part of the promotional actions carried out in the world, allow us to show and highlight a set of export products from Chile, delivering at the same time the possibility of joining forces so that the action has a greater impact for those who visit us, since they can know different industries, but also taste and know, as they had the opportunity to do it in the cooking show, how these products can be combined in tasty preparations. In this way, they can write various articles highlighting the preparations, the way of production and export of these Chilean food products, bringing them even closer to the Chinese consumer ”. 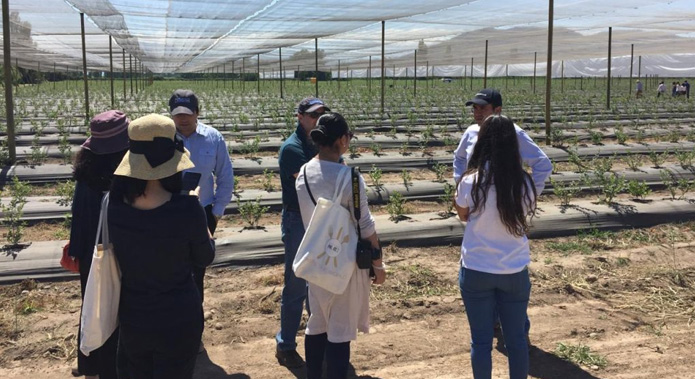 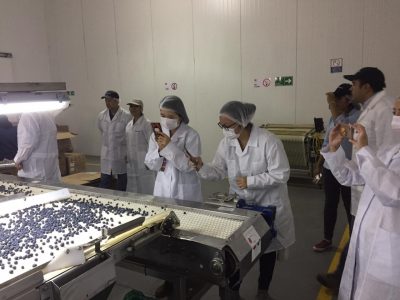 The next day, the delegation visited orchards and packings of cherries and blueberries in the area of ​​Planilla and Curicó, where they could learn about the production and export process of these fruits. In addition, in the following days the journalists also visited olive oil, dehydrated plums, walnuts, and meat production plants.

"I think it is very positive that the unions join, and that the different products that Chile exports are complementary," said Andrés Armstrong, Executive Director of the Committee of Blueberries of Chile-ASOEX.

Coinciding with this, Cristian Tagle, Chairman of the ASOEX Cherries Committee indicated: “It is very positive to be able to promote various Chilean food products in a single action, since they allow the action to show the different actors united, a general Chilean export industry , united ”.

Although the Chilean Hass Avocado Committee was not one of the organizing sectors of the visit, it participated in the cooking show, evaluating this activity positively. "We think it is fantastic that the different industries seek synergy to show our products, we hope in future actions also to join in the organization of these events, which are good for all of us," said Francisco Contardo, General Manager of this committee.

Finally, the visitors indicated that they were happy with the invitation and with the views of the Chilean industry. “I think it is very good to be able to get to know Chile and the food industry that come to Chile, we were able to taste different products and also enjoy the presentation of a very good chef and delicious food. Everything is very good, ”said Yolanda Yin, Editor-in-Chief of Restaurant Review in Shanghai, China.

Chile is at the peak of cranberry exports

Cristián Balbontín on blueberries in Chile: "If we want to be the best...

Natural drug developed to prevent and control global pathogen and...