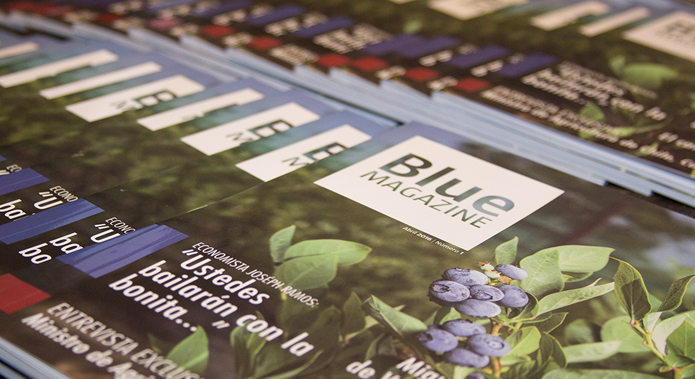 "In Blue Magazine we strive to build a magazine that we can share with our neighbors, a magazine that can enter the home and be hosted by people with different interests"

The past 28 of April, in the realization of the 3 ° International Seminar, "Chile, leader of the industry of the blueberry: New competitors, new challenges, new strategies", realized in the Center Monticello, began to distribute the first number of the Blue Magazine. On the occasion, it was distributed among the hundreds of attendees and has already begun to be distributed in the organizations, companies, and public and private institutions in Chile.

For the 4 ° International Seminar, which will be held in Terraza Andares, Guadalajara, Mexico, the 29 and 30 in June, the same distribution criteria will be used to cover also the Mexican agrofrutícolas structures. This modality will also be used in the context of the realization of the 5 International Seminar to be held at the JW Marriott, Lima, Peru, the 4 in August.

The magazine is free distribution and has a print run of 3000 copies and has 60 pages. In its contents not only is technical information on the cultivation of blueberries or the agrofrutícola industry, but also other topics of interest for the whole of society.

In the words of its director, Jorge Esquivel: "The main objective continues to be to contribute to the dissemination of scientific and quality work, essays, trends and current affairs, and to promote the transfer of knowledge not only to professionals, but also to society in general. It is for this last reason that Blue Magazine strives to build a magazine that we can share with our neighbors, a magazine that can enter the home and that is hosted by people with different interests ".

The second issue of Blue Magazine will appear in September, so that until August it is possible to participate as a sponsor or collaborator, the pages of Blue Magazine are open to anyone who wants to contribute.

Chilean blueberries in the US market: Review of the last 10 years and their projections