Professor Jorge Retamales: If there was a capitalization of US $ 4000 million for Codelco, why could not there be a twentieth part for research? 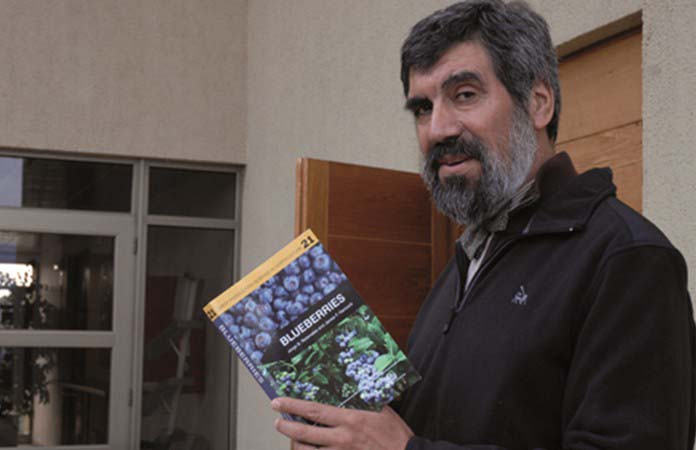 Jorge Retamales, besides being an Agronomist, is a well-known academic, scientist and researcher of the agrofruticultural world in our country, and his vision is to face the production in an integral way, relating all the processes and coordinating all the actors that participate in the productive model in the perspective of a permanent development that allows the final product to increase in quality and value.

Blueberrieschile.cl spoke with him in the context of the First International Blueberries Seminar. We asked him about the role of the State in scientific research and technological development, not only in the search for markets, but in the development of the industry as a whole, and here are some of his answers.

I see that what is done in investment in research is very low, in fact the 0,4 of the PGB (Gross General Product) is spent for research, other countries like Korea for example, has ten times more, and we all know that the only way to generate solutions is to invest in research. Currently Conicyt (National Commission for Scientific and Technological Research) which is the state body that guides the investigation takes a year without the person in charge of the investigation, and the researchers change the rules of the game. Each government imposes its system, change the terms, change the financing systems ... it is hard to think 20 years term, here you have to project not to the next year, but to 20 years term. You have to do research on many topics, for example, evaluation of varieties in genetics that can not be done rustically because there is a very short term financing, four years, and in four years you can not get a variety, in four years you either You can try a variety because it is just beginning to produce ...

Professor Retamales extends the examples of problems that investigators and research centers have to obtain the resources and the necessary terms to develop a complete investigation, but the only mechanism is the extension or revalidation of short terms, which does not always happen , leaving half-finished or half-finished projects, which are unusable as a sample. We ask him if the scientific world, or that of the academy, does not have the organization or the strength to impose a strategic view like the one he has, and this is what he told us.

I believe that it has been tried, but we have not always been listened to, for example they wanted to pass all the Sciences part to the Ministry of Economy and it is not just an economic question, it is a question that goes beyond, we are more related almost to culture than With the economy, we are in some things involved in the Ministry of Mining, in other Agriculture, a little in Education, Culture, Economics, they send us to one side and the other ... then a look is missing ... one sees it in the aggregates that it designates the government, it appoints cultural, military, sports, labor and all kinds of attachés, but not scientists. So we have to have our antennas placed in Europe, the United States, China, Japan, detecting what is being done and the possibility of establishing contacts and developing research with them ...

Are there currently possibilities that this reality changes ...?

The Government is currently very busy with the issue of educational and tax reform, and other initiatives, so we understand that it is not the time to address these issues, but there will have to be a time in the near future to solve these issues, because if there was a capitalization of US $ 4000 billion for Codelco, why couldn't there be a twentieth to capitalize on research. There are many people who have gone abroad to study and train and return and do not have work here, there are people of the highest level, with doctorates, and working as taxi drivers instead of taking advantage of this potential, there would be a need to create a quota for them, there would be We have to create more research centers but there is no money for that, and on the other hand, sending people abroad when we have very good people doing things in Chile. We are giving money to the gringos and Europeans instead of putting that money in Chile, which would mean solving local problems instead of solving problems of the Spanish, the French, or the North Americans, that is, let's do doctorates in Chile and let's give that financing to the Chileans.

The lines of work of Professor Retamales are framed in the physiology of fruit trees, especially in the nutritional aspects and especially its scientific contribution in the area of ​​the minor fruit trees such as strawberry and cranberry. Dictates the undergraduate courses, physiology of vegetable production, deciduous fruit trees and minor fruit trees, at the University of Talca. In the Master in Horticulture and Doctorate in Agrarian Sciences of the same University participates in the course of advanced fruit growing. Professor Retamales is also the representative for Chile of the ISHS (International Society in Horticultural Sciences).

Julian Beaver, from Korvan Chile Ltda .: "The first advantage of the mechanized harvest is that 106 reduces working hours to 3 per hectare, and the second is that it is harvested only by maturity and not by color"