SNA warns of losses of US$500 million per week due to trucker strikes and asks that it be deposed: "The cost is very high"

"Buyers' trust is also lost if you don't arrive on time," said the president of the National Agricultural Society, Cristián Allendes, regarding the blockades on routes and ports for shipments. 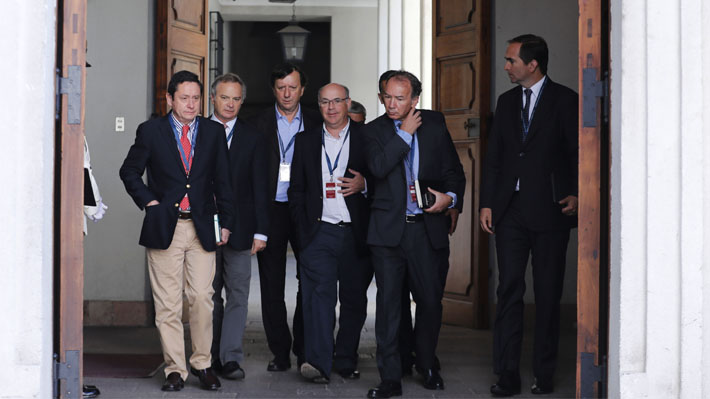 The president of the National Society of Agriculture (SNA), Cristián Allendes, together with the main food unions in the country -Fedefruta, Asoex, Chile Carnes, Chile Alimentos and the Movimiento Unitario Campesino y Etnias de Chile- met with the Government to evaluate the impact of the truckers strike in the sector.

This is because today marks five days since the mobilizations of carriers began to protest the rise in fuel prices, which has led to blockades both on the country's main routes and in the ports of Valparaíso and San Antonio.

In this sense, the president of the SNA asked the truckers' unions to end the strike today, in order to avoid further disruptions in supply chains and delays in fruit shipments abroad.

“The trucker strike is seriously affecting everything related to the production and delivery of food to all Chilean consumers, and especially also to exports. November is a month in which exports of cherries, blueberries, and other fruits begin, and we must mobilize 5.000 containers per week and that is not happening today," Allendes said.

“The trucker strike is seriously affecting everything related to the production and delivery of food to all Chilean consumers, and especially also to exports. November is a month in which exports of cherries, blueberries, and other fruits begin, and we must mobilize 5.000 containers per week and that is not happening today," Allendes said.

"We need truckers to stop their strike today, because they are going to seriously affect the entire production system, the supply to supermarkets, processing plants," he added.

In this sense, the SNA leader commented that this situation has also affected cattle and plantations. "Cattle, chickens, pigs are having problems getting food for their consumption, and everything that is today vegetables from the north is also being affected, it is arriving in less quantity and also late," he said. the. 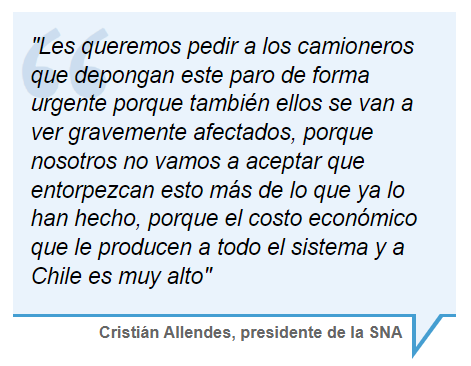 After that, Allendes hardened his tone and stated "we are the ones who give work to them -to the truckers-, the entire productive chain, and today due to quarrels between sectors we do not justify this strike at all, because we believe that the The productive chain has been paying the higher costs of fuel, and we do stand in solidarity with the carriers on the issue of safety.”

Asked about the effects on prices due to the risk of shortages, the representative of the agricultural sector maintained that "when there is little supply, the demand will be the same, obviously prices will rise", adding that in this "the production chain will not It has nothing to do with it, on the contrary, we are the most affected.

“We want to ask the truckers to put an end to this strike urgently because they too are going to be seriously affected, because we are not going to accept that they hinder this more than they have already done, because the economic cost they cause to The entire system and Chile is very high, "he settled.

In terms of the economic cost of the mobilizations, he indicated that "per week, more or less 5.000 containers of fruit have to be exported per week, that is US$500 million."

In this regard, the head of the SNA stressed that in the case of exports "we have specific times to arrive with the products abroad, the confidence of buyers is also lost if they do not arrive on time."

"The export system is prepared to do a good job, and we are still confident that we will arrive on time, because the markets also need these products and we worked a full year to arrive with them," he added.

"If they do not end this strike today, the truth is that we, who are the ones who give them their salary, pay their freight, we are also going to take drastic measures against them," closed the president of the SNA.

Chile: CNTC, Fedesur and FedeQuinta get off the carrier strike after agreement with the Government