According to data analysis consultancy Fresh Fruit, the 2021/2022 blueberry export season, which runs from May to April, has reached its first quarter. Until July, the fruit shipments in this campaign period totaled 7,267 tons for US $ 41.3 million, 7% more in volume and 3% less in value compared to the same space of the previous season. In this short time, the average price of blueberries was US $ 5.68 per kilogram, 4% below the same season of the previous season. 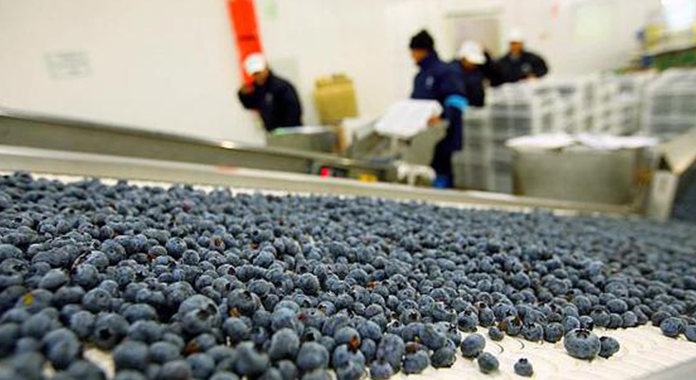 El volume increase in these months it is in line with the estimates made by ProAranberry. The producers association projected that in the 2021/2022 campaign, exports would reach the 200 thousand tons, which would imply a 25% growth in volume compared to the previous season. This growth in the Peruvian supply would have an important impact on the price of the fruit; However, during the campaign an average drop of 2% in the price is expected, so it would be trading at around US $ 6.00 per kilogram. With this result, the total value of the blueberry At the end of the season, it could exceed US $ 1,100 million, which would allow the product to fight with the grape for the first place in the Peruvian agro-export basket.

The main destinations for Peruvian blueberries last season were USA, with 53% participation; the Netherlands, with 27%, and China (including Hong Kong), with 10%. In the first two markets, the main suppliers of the fruit were the Hortifrut group (includes the companies Hortifrut Perú SAC, Hortifrut Tal SAC and HFE Berries Perú SAC) and Camposol SA In the case of the Asian country, the most important suppliers were the group Hortifrut and Agrovision Peru SAC 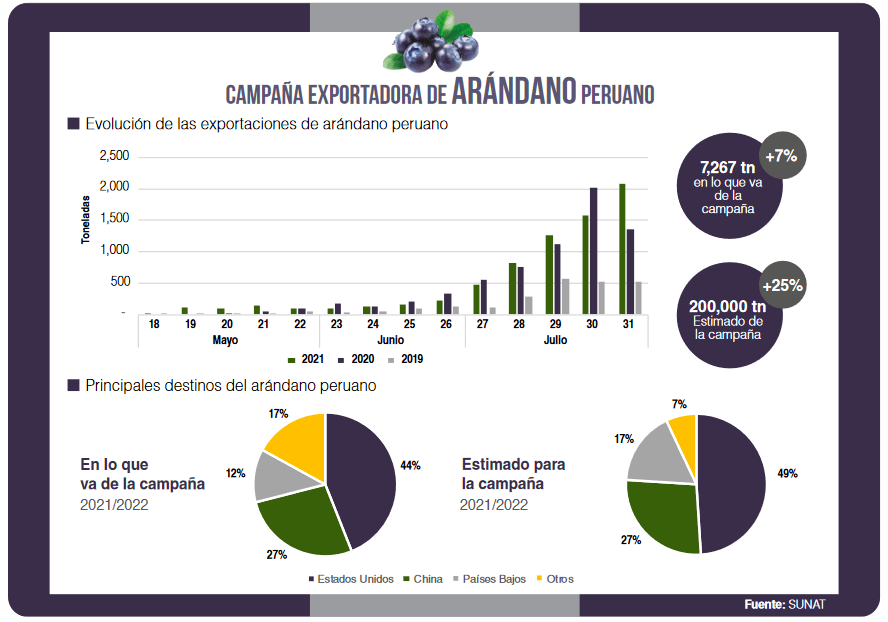 During the first weeks of the current campaign, in the month of May, the blueberry exports totaled 448 tons for US $ 2.7 million. Compared to the same period in the previous season, fruit shipments grew 206% in volume and 141% in value. The greater Peruvian supply - in a month in which Peru is not the main supplier - had an impact on prices, which contracted 21% to reach US $ 5.97 per kilogram. In this month, the main destinations for the berry were the Netherlands, with a 43% share; China, with 12%, and the United States, with 11%. The market that paid the best prices was the United States, with US $ 6.71 per kilogram. Regarding the main exporters in May, Camposol SA stood out, with 50% participation, and Exportadora Frutícola del Sur SA, with 38%.

In the second month of the season (June), Peruvian blueberry shipments were more controlled. During these weeks, fruit exports reached the 722 tons by U.S. $ 4.7 millones, showing a 20% drop in volume and 11% in value compared to the same period last year. Thanks to the contraction in supply, the price of blueberries recovered, with a growth of 11% to reach US $ 6.54 per kilogram. In June, the main destinations for the Peruvian berry were the United Kingdom, with a 36% share; China, with 24%, and the Netherlands, with 14%. The market that paid the best prices was the United States, with US $ 11.08 per kilogram, followed by China, with US $ 8.00 per kilogram. It is worth mentioning that the North American market had a participation of 9%. Regarding the main Peruvian blueberry exporting companies, Camposol SA stood out, with 46% participation, and Hortifrut Perú SAC, with 15%.

In July, blueberry exports showed a slight increase. Shipments totaled 6,097 tons for US $ 33.9 million, 6% more in volume and a similar value compared to the same month of the previous year.

The increase in supply had a direct impact on the price of the fruit, which fell 6% to trade at US $ 5.56 per kilogram. The main markets for Peruvian berry were the United States, with a 51% share; China, with 29%, and the Netherlands, with 13%. The markets that are paying the best prices for blueberries were China, with US $ 7.10 per kilogram, and Saudi Arabia, with US $ 6.05 per kilogram. Although the latter has a participation of just 1%. Regarding the most important buyers of the Peruvian product, Camposol SA stood out, with 29% participation, and Hortifrut Perú SAC, with 17%.

During the different blueberry seasons, the main destinations for Peruvian fruit were the United States, the Netherlands and China. This campaign, the Top 3 markets would not change, but the share that each country has in Peruvian exports would. According to FreshFruit estimates, the United States would have a share of 49% In Peruvian blueberry exports (4 percentage points less than in the 2020/2021 season), the Netherlands would maintain a share of 27% (similar to the previous year) and China would increase its participation to 17% (7 percentage points more).

The greater presence of the Asian country occurs in a context in which Chile faces problems with its production, so it could not supply China, a country where it is the second most important supplier (44% share), after Peru (56 %). Likewise, Peru will also have good growth opportunities in the United States, a country that has had problems with its production, so it will have to increase imports to compensate for domestic demand.

Ancash: blueberry production would increase by 20% this year