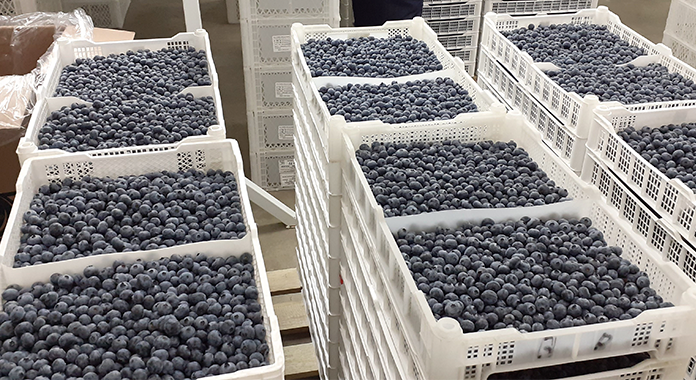 Along with the end of the truckers strike, after 8 days of affecting the normal export of fresh seasonal fruits, such as blueberries. Another piece of good news for the Chilean blueberry industry is the start of exports, through the first refrigerated ships of the "Blueberry Express" service, operated by Cool Carriers, which will depart from the Port of Coronel to the Port of Gloucester in Philadelphia, United States.

The first shipments will be made next week, coinciding with the start of the peak export period for this Chilean super fruit for this 2022-2023 season. The first “Blueberry Express” will depart for the East Coast on December 8, while the second scheduled ship will head to the West Coast, departing the week of December 18.

This service is tailored to the needs of the Chilean blueberry industry, which seeks to reach its main market, the United States, more quickly and expeditiously, thus avoiding the logistical complications of the previous year. The "Blueberry Express" service has a calculated transit time of 12 days, so this first ship has an estimated date of arrival (ETA) of December 20, just for the Christmas and New Year holidays.

"This is a great achievement for the Chilean blueberry industry after last season shipments were affected by long transit periods and loading and unloading difficulties, which affected the quality and condition of various fruit species destined for to the United States," Felipe Silva, President of the Chilean Blueberry Committee-ASOEX, told Simfruit.

Silva highlighted that, given the current climatic situation, the temperatures are accelerating the ripening of the fruit, therefore, the volumes are reaching a normal situation after a slower start in the northern and central-northern areas of the country. who are the first to start harvesting in Chile. "Thus, during the next few weeks we will have significant volumes heading to all markets, giving continuity to the supply of other countries that are already lowering volumes these weeks," he highlighted.

For his part, Andrés Armstrong, executive director of the Committee highlighted that, "continuing with the trend observed in previous seasons, the renewal of varieties continues to advance and the volumes exported to date reflect this fact, visualizing, at the same time, the effort of the industry to choose for export those varieties that have a better arrival at their destination”, he closed.

Samuel Escalante: "There is a powerful space for the early production of cherries in Chile"