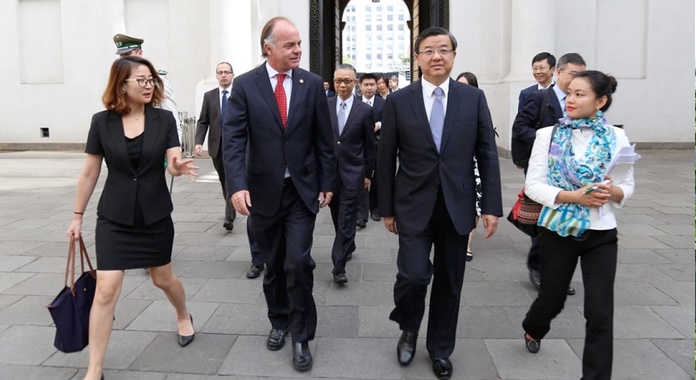 Very good news for the export sector of Chilean fruits, and other national agricultural products were delivered during the official visit of the Minister of Customs of the People's Republic of China, Ni Yuefeng, to Chile. Among the agreements signed include the renewal of requirements for the transport of fresh fruit in the cold storage of ships, the opening for hazelnuts without shells and domestic poultry products, together with the lifting of the bird flu alert that affected the national turkey producers and that China maintained with our country for 2 years ago.

The signing of the agreements took place last Friday, in the O'Higgins room of the Palacio de La Moneda, in a ceremony that was attended by the delegation of Chinese authorities who accompanied the Minister of Customs of the Asian nation , and the ambassador of China in Chile, Xu Bu, as well as the Minister of Agriculture, Antonio Walker; accompanied by the Assistant Secretary of Agriculture, Alfonso Vargas; the Director of the Agricultural and Livestock Service (SAG), Horacio Bórquez; the Director of the Office of Agricultural Policies and Studies (Odepa), María Emilia Undurraga; the Executive Secretary of the Chilean Agency for Food Safety (Achipia), Nuri Gras, and representatives of trade associations such as Ronald Bown, President of the Association of Fruit Exporters of Chile AG (ASOEX), the President of Expocarnes, Juan Carlos Domínguez and of Fedefruta, Jorge Valenzuela, among others.

In this regard, the Minister of Agriculture expressed to SimFRUIT: «Today is a very important day for the Government, for Chile and especially for agriculture. We had a very good meeting with the Chinese Customs Minister, the body that authorizes the entry of new products to that market. Today, we had the opportunity to ratify the work schedule to materialize the entry of Chilean European pears to China, we also opened the Chinese market for all Chilean bee products, as well as the entry for Chilean European hazelnuts, a species It has more than 23 thousand hectares in Chile, and we also signed an electronic certification agreement that will streamline our exports. In addition, we signed an agreement so that our fruits can travel in cargo warehouses and not only in containers. We also advanced negotiations for the entry of our frozen fruits and for the entry of our citrus to China, once we finish the agreement for the entry of our pears to China. The start of negotiations for the entry of our citrus fruits, without a doubt, is great news that we hope to consolidate in less than a year. ”

In this regard, the President of ASOEX, Ronald Bown indicated: "We are very happy with the visit of the Chinese Customs Minister to Chile, since important agreements have been signed for the exports of our fruits to that country, as well as other products national agricultural, since it is the culmination of a work in which Asoex has been closely involved, since the beginning of the negotiations, together with the authorities of the Ministry of Agriculture and the Agricultural and Livestock Service, to whom we thank the efforts made » .

Likewise, Bown pointed out that after the entry of the Chilean pears, “we will be able to begin the negotiation for the opening of the Chinese market for our citrus fruits, which will be negotiated as a group. The China-Hong Kong market was the market that reflected the highest growth in the reception of our exports, during the 2017-2018 season. The shipments of fresh Chilean fruits increased 45% in relation to the previous period, with more than 390 thousand tons received, which will be complemented by the entry of our pears, and in the near future our citrus fruits ».

In order to analyze the positive announcements for the fruit and agricultural sector of Chile, as well as to recognize the work, which along with the Chilean authorities, has been carried out to promote the trade of products in a reciprocal way between both nations, the Association of Fruit Exporters of Chile AG (Asoex), held a meeting and lunch in the commune of Pirque.

The meeting was attended by the former President, Eduardo Frei, in his capacity as extraordinary and plenipotentiary ambassador of Chile to China; who highlighted the visit, as well as the good and growing trade relations between China and Chile. Also present were the Chinese Minister of Customs, and the delegation that accompanied him, in addition to the Minister of Agriculture; Antonio Walker, the Undersecretary of Agriculture, Alfonso Vargas; the Ambassador and Commercial Director of the Chinese Embassy in Chile, Mr. Xu Bu and Mr. Liu Rutao, the Director of the Agricultural and Livestock Service (SAG), Horacio Bórquez; the Director of the Office of Agricultural Policies and Studies (Odepa), María Emilia Undurraga; Francisco Perez Walker, and, the representatives of ASOEX Ronald Bown, President and Miguel Canala-Echeverría, General Manager of ASOEX, as well as professionals from Expocarnes and Fedefruta, among others.

During the December 01 Saturday, the Minister of Customs toured orchards and packing of cherries of the Lo Garcés Agricultural Society in San Francisco de Mostazal, and the Agrosuper white meat processing plant in Rosario, accompanied by the Minister of Agriculture of Chile, Antonio Walker and union representatives such as Ronal Bown, President of Asoex.

During this tour, Minister Walker pointed out: "With the visit of the Chinese Minister we earned their trust, and now what remains is to respond with our products to the trust they have given us."

Likewise, the national authority reported: »We have President Piñera's visit to China in April and that of the Chinese President to APEC in November of next year, and our strategy is to see if we can shorten the negotiation deadlines for products such as citrus , alfalfa and many others that are in the portfolio, we cannot lower our arms in terms of being a serious country, which provides assurance that the food it produces can be eaten anywhere in the world ”.

In that same sense, the National Director of the Agricultural and Livestock Service (SAG), Horacio Bórquez, stressed that "thanks to this visit we can show the good work that the SAG is doing, providing assurance that Chilean products have quality and safety and which, in short, are reliable products ».

The President of Asoex highlighted the visit to the cherry industry, as it is one of the species that currently arouses the greatest interest among consumers in China. «More than 90% of our cherries are destined for the Chinese market, as it is a high quality and harmless product. This campaign we will continue promoting the knowledge of our cherries and their consumption, through a new promotion campaign. It is a 360º campaign that will include sales points, social networks, e-commerce, mobile apps, mass advertising, physical events, activations at fairs and wholesale markets, in a total of 65 cities and over 39 days. The scope of the promotion will be national, with a greater emphasis on regional cities. We will maintain the goal of increasing consumption, deepening the successful message used last season "Enjoy your Red Moment", said Bown.

Finally, Hernán Garcés, stressed that "this visit is very important to us, that being so interested in what we do opens a great door for us to facilitate the exports of our products," he concluded.

Bees: the secret to having large and fast growing blueberries