Chile: 76% of the country's surface is affected by drought, desertification and degraded soil 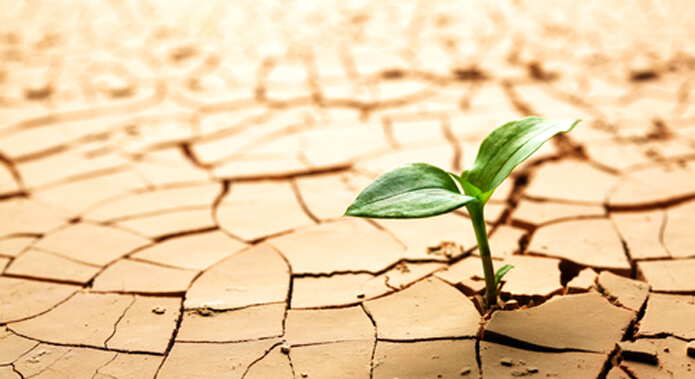 The 22% of the country's surface presents to some degree symptoms of desertification, the 80% shows signs of soil degradation and the 72% effects of the drought. This is the diagnosis with which Chile is updating its strategy and national plan 2016-2030 before the UN Convention to Combat Desertification and Drought (Cnuld).

The combined action of the three problems affects the 76% of the national territory: 57,5 million hectares where 11,6 millions of people live (65% of the national population), points out "The Mercury".

The problem is exacerbated between regions IV and VIII. The regions of Coquimbo, Valparaíso, O'Higgins and Metropolitan concentrate the 70% of the 101 communes in the country that present simultaneously serious symptoms of these three factors.

The conclusions were obtained after analyzing and crossing meteorological and bioclimatic data (rainfall and temperatures of the last 60 years), physiographic data (vegetation cadastre, erosion risks and statistics from the General Directorate of Water), and socioeconomic and natural resources indicators and environment, including forest fires between 1985 and 2014, and agricultural burning between 2008 and 2013.

All this makes it possible to develop a new map showing the scope that the loss of ecological and economic variability and productivity of its soils presents in the national territory today and identify the most conflictive areas.

The previous antecedent, the «Preliminary map of desertification in Chile» elaborated by the National Forest Corporation (Conaf) in 1999 already showed that the 93% of the 290 communes analyzed presented some degree of desertification.

“In global terms, the scope has not changed much. But what was once a moderate problem became serious. Prevention systems are failing », said forestry engineer Efraín Duarte, of the consultancy "South Austral", author of the study.

In this, the last seven years of drought have been decisive.

The National Coordinator of Forests and Climate Change of Conaf, Ángelo Sartori, admits that this shows that the state instruments applied so far have not attacked the central problem. “These are not wasted years, there have been successful experiences. But new approaches are required »He said.

In this sense, the updated diagnosis applies the new concepts sanctioned by the Convention in 2015 to align the strategies in the matter. They establish a special category of "Soil degradation" (erosion and loss of biological and economic productivity). If they affect those that already have aridity, the phenomenon happens to be "Desertification".

The drought, rainfall deficit in relation to historical records, is also understood as a separate problem, which sharpens the other two.

The results of the study are being socialized in workshops in the Metropolitan Region, Coquimbo and now in Viña del Mar between public services and agricultural cooperatives, before submitting it to the UN Convention.

Solution to the shrinkage in the export of blueberries: Berries Quality

II Technical Day of the cranberry

Produce blueberries in a pot or in a bag?

The benefits of having access to data that enable your organization...

Achieving the maximum potential of the new varieties of blueberries: Mace...