With the aim of reaching 100 thousand tons, the International Blueberry Seminar ends in Morocco

The Moroccan season runs from October to June - although it is quickly moving to cover the whole year with the new projects - reaching a production of 47.000 tons in the last season, which translates into a 29% increase compared to the previous campaign. 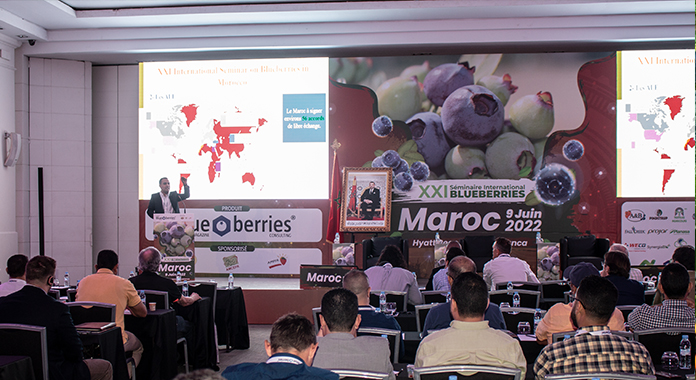 In the luxurious facilities of the Hyatt Regency Casablanca in Morocco, the meeting of the Moroccan berry industry was held, within the framework of the XXI International Blueberry Seminar that was held on June 9.

The event, scheduled by the World Blueberry Tour, which is coming to Africa for the first time, stood out for the high standard of organization and the great interest of the attendees, who participated in the topics exposed not only with the questions that later of each block are scheduled, but an open microphone was implemented to channel the numerous concerns of the participants.

The presentation of the president of the Moroccan red fruit producers, Amine Bennani, was one of the highlights. In it, the leader of the Moroccan producers made a complete report on the state of the berry industry in all its varieties, highlighting the sustained growth of blueberries in the country, which maintained an annual growth figure of between 300 and 400 hectares, shooting up last year to an increase of 900 hectares planted with new projects.

Morocco currently has 11.500 hectares dedicated to the production of berries, of which 3.900 hectares are devoted to blueberry crops, covering 34% of the planted area, mainly in the north, with a presence in Loukkos Gharb, in the mountainous area of Atlas, in Agadir, and in the southern region of Dakhla.

The Moroccan season runs from October to June – although it is moving quickly to cover the whole year with the new projects – reaching a production of 47.000 tons in the last season, which translates into a 29% increase compared to the previous campaign, Of which 42 were exported in fresh fruit and only 900 tons in frozen. Its main destination is Europe, although Morocco exports its fruit to 2.700 countries around the world.

The self-imposed strategic objectives of the Moroccan blueberry industry for 2030 are to reach a planted area that is between 5000 and 6000 hectares planted and an export volume that reaches 100 tons of fresh fruit exported.

Among the comparative advantages offered by Morocco is its geostrategic position that allows production throughout the year, in addition to being the most stable and safest country in North Africa and the Middle East.

According to the presentations given at the International Seminar, the Moroccan blueberry industry is made up of a discipline of "know-how" and an intelligent youth, with a lot of enthusiasm and entrepreneurial vigor, as well as a remarkable infrastructure and logistics. It is noted that Moroccan fruit, in addition to being of good quality, takes between three to four days from the fields to the final European consumers.

Among the main challenges proposed to be overcome by the industry is gaining access to the Chinese market, and among the problems that must be faced, according to the producers, is the increase in installation costs, the higher prices of agricultural inputs and the unequal distribution of sales prices (price to consumers is 10 times more than those paid to producers), in addition to developing air freight to have a presence in the market of Middle Eastern and Asian countries.

It is the first time that the World Blueberry Tour arrives on the African continent with a high-level International Seminar, which has served to talk with the various actors of an important and growing industry, and share different experiences on the various aspects of the crop. The meeting has made it possible to collect a lot of quality information for the global industry and learn more about the reality of the Moroccan blueberry industry, so that the next visits will be even more beneficial for its development.

By way of evaluation, there are plenty of arguments to conclude that Morocco should become a permanent destination of the Blueberry World Tour in its journey through the main countries of the global industry.