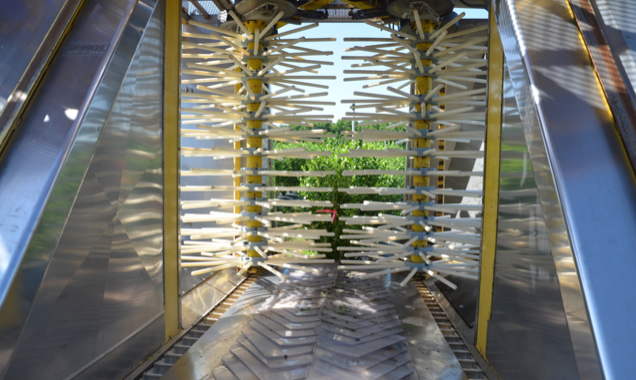 The secret to future success for Florida blueberry growers may lie in the advancement of mechanical harvesters. Especially when growers try to compete with rising imports amid disparity between labor wages, farmers need the advantage of not having to rely on H-2A workers to harvest their crops.

Doug Phillips, blueberry extension coordinator at the Institute of Agricultural and Food Sciences (IFAS) at the University of Florida (UF), said power harvesters are in the early stages of commercial-scale adoption.

“I think that to be successful, a lot of growers will adopt it. They figure out where their biggest costs are, where the big cost differences are, ”Phillips said. "But to be price competitive, I think a lot of people realize they need to start heading in that direction."

According to Jeff Williamson, professor in the department of horticultural sciences at UF / IFAS, manual harvesting is the most expensive expense for growers. The berries are normally harvested every 2 to 4 days. The supply of labor can also limit operations at harvest time.

That puts emphasis on the adaptation of mechanical harvesters. Producers cannot survive in the long term, especially when competing with growing imports from Mexico.

Mechanical harvesters and blueberry farming also need to be refined so that no damage occurs to the fruit. It is currently a common problem.

“There are some features that you would really like to see in something that will machine harvest very well. Part of that is the firmness of the fruit. When you think about it, you have this machine that goes by and shakes the bush with these fingers. The berries fall onto the collecting plate. That's where some bruising can occur, ”Phillips said. “You want a variety that has firm berries, and you want something that has a decent shedding force where you bring out the blue fruit and not the green fruit. You want something that has a narrow base of the plant so that these scales at the bottom that close around the plant fit snugly around the plant so you don't lose a lot of fruit on the ground while it shakes.

He said this is a focus of UF and its breeding program.

“Part of this is the breeding program and making sure they focus on firm fruit, which to a large extent they are. Part of their technology where they are finding smoother catch dish surfaces that are less prone to injury when fruit falls. I think it's both a genetic breeding target and an enhancement of technology, ”added Phillips.

Rebound in fruit and vegetable exports in July driven by watermelon, stone fruit and red fruits