Jorge Retamales on Peru: "The producer has to assume costs that the country assumes elsewhere"

The renowned blueberry researcher gives his opinion on the industry in Peru and the effects of its boom on the Chilean market. 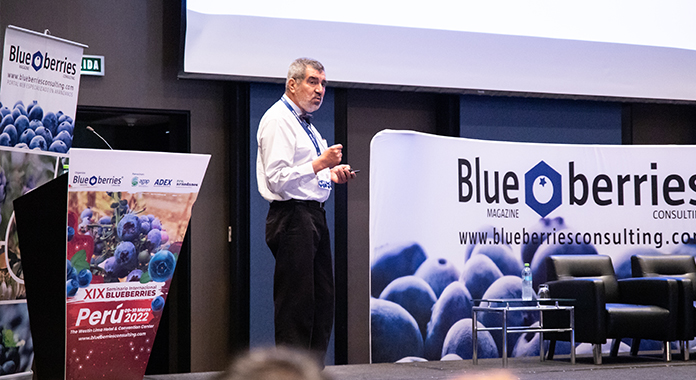 When Jorge Retamales is present at one of the Blueberries Consulting seminars, he draws the attention of the attendees: photos are taken, books are signed and the speakers enjoy sharing with the man who is the author of the basic texts for the study of blueberries in the world's leading universities.

His career is internationally recognized. Retamales studied Agronomy at the University of Chile, specializing in Fruit Growing. His graduate and Ph.D. work was done at Michigan State University, highlighting his Ph.D. research studying nitrogen fertilization efficiency in tallbush blueberries. He is now a leading international blue fruit consultant.

The audience and even part of the staff of our sponsors, gathered to listen to the talk on the use of Calcium in blueberries at the XIX International Seminar on Blueberries Lima 2022. During his participation in the event, he visited the farms together with a group of exhibitors of Family Farms Peru and San Gallán in Ica.

"They are impressive" he expresses about the tests of new varieties in the dunes of the farms. “In Chile one is used to a field planting 20 hectares, which is already enough. Here, 100 hectares are planted per year, with a lot of technology," says Retamales, praising that despite its extension, "almost every plant was cared for."

In almost a decade, Peru became the largest exporter of blueberries in the world. During the 2021/22 season they reached 218 thousand tons, 31% more than in the previous period. Although its growth rate is declining, the progress in a crop unknown for years to Peruvian producers continues to impress.

It is not only the thirst for knowledge that Dr. Retamales highlights, but also the favorable socio-environmental conditions: they have sufficient labor, efficient water infrastructure, tax benefits, low disease pressure and a healthy climate for their plants that, added to the varieties chosen by the industry explain the surprising production figures and the high quality of the exported fruit.

“What I miss is that they don't have a national investigation policy. They are isolated efforts of each producer, who, in the future, if they have any macro problem, has a very high risk”, says Retamales.

The National Agrarian Health Service of Peru (Senasa) and the National Institute of Agrarian Innovation (INIA) are the institutions in charge of preventing the spread of diseases and pests, as well as conducting research. However, in this last field, state cooperation or between the private ones, has not yet been installed in the innovative culture of the Peruvian industry.

In this regard, Retamales states: “At the moment there is an investigation carried out in the field, without a scientific methodology. They are experiences of each producer and there is little communication between them. So, what one can discover, even if the other is a neighbor, is not necessarily applicable to their situation.”

The researcher is also critical of the government's investment to encourage and protect production: "The producer makes an effort with a lot of technology and, in the last leg of the process, which is the transport to the packing house, there are some horrible roads in the which everything implemented can be put at risk for half an hour of traffic”.

With movement, Bloom, the fruit's protective wax, slips, leaving it exposed to a greater risk of dehydration, loss of firmness and quality.

“These are aspects that in other countries are a State commitment to make production viable. But in this case, the producer has to assume costs that in other places are assumed by the country, county or the State as a whole”, criticizes Retamales.

The Peruvian season lasts from June to May. Chile takes advantage of a space between December and March where Peruvian production falls below Chilean production. A luck that other South American countries, like Argentina, did not run.

“In Chile I believe that, if it maintains its production, many of the producers with a certain level of performance and cost management are largely viable. Those who are forcing a variety to produce outside its comfort zone are not, which requires greater spending and investment," says Jorge Retamales.

Variables such as water scarcity, lack of labor, a slow varietal turnover, and after the pandemic, logistical transportation problems, have forced Chile to look for new ways to compete. For Professor Retamales, there is a commercial and competitive opportunity with organic blueberries.

“The market is growing and they have good prices, but this is not the case for all of Chile because, as a result of the entry of diseases or pests in recent years, the use of pesticides has been required. As they are so new, there is still no knowledge of how to manage them organically," says the researcher, but adds: "Although a slightly lower yield is normally obtained, this is offset by the higher value per kilo of exported organic fruit.

Chile maintains equivalence treaties with the European Union and Switzerland, in addition to one of understanding with Brazil. An agreement with the United States is currently in process and talks are underway with Japan and Australia; agreements that give a competitive advantage to the southern country.

"That requires a lot of responsibility, because if the organic market begins to be mishandled, let's say, products that are not allowed are applied, markets will be closed," Retamales points out.

The results of the 2021/2022 Chilean season have been one of the worst in its history, highlighting causes such as the long period of maritime transport and the shortage of labor. The latter “raises production costs a lot, because the harvest is almost 50% of them. As long as there is more scarcity, the prices of hiring labor rise, and this lowers profitability, which in some cases can reach a level that makes the production of certain varieties or in certain areas unviable”, describes the researcher.

Twelve years ago, Jorge Retamales, in his role as professor at the University of Talca, became involved in a project that studied the mechanical harvesting of blueberries. Making the bushes vibrate, the fruits fell on a tarpaulin, which produced a slight negative effect on post-harvest, in addition to reducing the harvest time by up to three times.

Another advantage was the possibility of working at night. "The lower the harvest temperature, the faster the temperature drops when it arrives at packing, and the longer the post-harvest life of that fruit," says Retamales.

Competitiveness in the market introduces innovations and changes according to consumer demand. New cultivation techniques, new quality qualities that are demanded by producers from genetic developers of varieties, create a constant cycle of renewal.

As a professor and researcher with years of experience, Retamales warns: “Producing fruit is very complex. There are always management aspects that can be done, but if you stretch on one side, you shrink on the other. The plant is going to have to make an effort, a metabolic alteration, to incorporate that change that we want. So in handling you have to try to balance.

For the experienced consultant, this is the key role of the producer: “they must establish the balance, even when I intervene to be able to make this variety better, more productive, make it tastier, give it a better post-harvest life. Go down the list of priorities and say well, I would prefer these aspects, but if I have these five, I already feel satisfied”.