Asia, the USA and Europe concentrate a large number of ships in their ports in the middle of the Christmas shipping season. 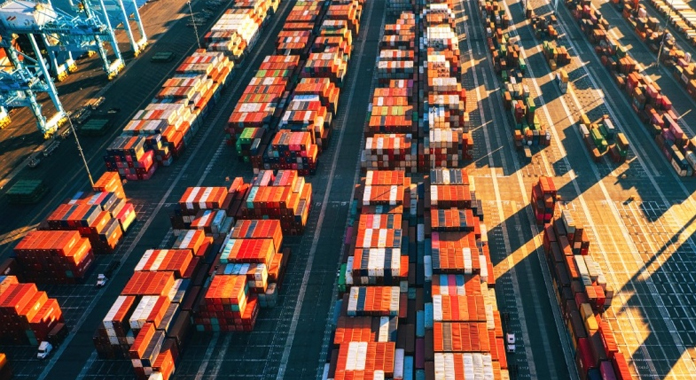 A map of the level of congestion in many of the world's major ports can reflect the state of supply chains and enable cargo to avoid the unprecedented bottlenecks that disrupt global trade.

It is not surprising that shipowners and operators are anxious at the prospect of a ship being caught in congestion, as delays in freight movements can often be costly and disruptive. With a total of 2.366.401 TEUs (10% of the active container fleet) currently on standby worldwide, congestion is a major factor influencing ship availability and rates, as global economies continue trying to recover this year after the pandemic.

The number of container ships anchored off the ports of Shanghai-Ningbo, the largest foreign trade center for China and the world, on Friday, November 5, reached 248, 31 less than the average from April to October, while its neighbor The smallest to the north, the regional port of Tianjin, had 14 container ships on standby, 11 more than usual.

At Asia's second-highest concentration of call-offs, Hong Kong-Shenzhen, the ship count stood at 221, 30 more than average, while its smaller southern neighbor, Qinzhou, recorded a peak of 10 containerships. .

Reports indicate that congestion levels in China peaked at 361 ships in late July, when Typhoon In-Fa hit eastern China, restricting access to major ports such as Shanghai and Ningbo. Unable to enter the ports safely, the queues accumulated and caused further disruption in schedules. Since then, in the past three months, container congestion has been observed to gradually decrease in China.

Singapore, which fell from the peak on Monday, November 1 when it counted 53 ships on hold - 17 ships more than usual - which has led it to reflect a congestion rate of 48,2%, or 10,5 percentage points more than the median. In neighboring Malaysia, Tanjung Pelepas saw its net congestion increase by 30,5 points, to 57,1%, and Port Klang increased its congestion by 7,5 points, to 37,1%.

Southern California remained in logistical chaos, with at least 79 ships waiting to unload at the country's main port complex: Los Angeles and Long Beach (LA-LB). Various reports indicate that container ships on the LA-LB tour have continued to increase significantly since July 2021 in the US Congestion outside the port still shows no signs of easing and is contributing to the lack of capacity of the vessels that are is currently observing globally, pushing ever tighter rates. In October, Post Panamax rates reached a staggering US $ 130.000 / day, an increase of more than 300% compared to this time last year.

The number of ships off Savannah, Georgia, the fourth-largest port in the US, fell to the lowest level since October 4. The neighboring anchorages of Charleston (South Carolina) and Fort Lauderdale (Florida) 11 and 10 container ships to the tour, respectively. The highest records in both cases

During periods of heavy congestion, ports use as many terminals and berths as possible to maximize throughput. However, this can add more pressure to port operations and increase the duration of calls, causing waiting times to increase even more.

In the midst of this panorama, they continue to struggle to keep up with production, forcing them to operate 24 hours a day to clear outdated containers. They are also prioritizing the return of empty containers to Asia, and many import ports have storage yards full of empty containers. This means that the ports of origin lack containers where exportable goods are shipped, which causes more delays and higher costs.

Supply chain problems also contribute to port congestion, as truck drivers are unable to dispatch the large number of containers in the port, causing delays in moving containers from storage centers.

Given that 40% of containerized goods enter the US through LA-LB, these delays are more than significant for US imports.

This congestion is expected to continue for a while, as another 46 container ships are en route to arrive in Long Beach / Los Angeles this week and next.

In Europe, the Greek port of Piraeus continued to set new highs, as the 29 ships counted at its anchorage surpassed this week's count by one. Also worrying are the events in the port of Felixstowe, which concentrates 40% of containerized imports in the United Kingdom, where, like the ports of the USWC, most container ships transport manufactured products from export centers in China. from toys, fitness equipment, electrical products and clothing to frozen foods.

The port has received around 45% fewer containers this month compared to the same period in 2020, and around 50% less than in the same period in 2019. This suggests that the port is struggling with delivery times as a severe shortage of HGV drivers and terminal congestion means that goods are not leaving the port fast enough to clear space for a steady stream of new containers.

Various analyzes suggest that Port congestion has not only affected ship rates, but has also impacted supply chains as transport links struggle to keep up despite the congestion

Agree as specialists like VesselsValue it would be possible to observe the calm in demand after the end of the Christmas period and the Chinese New Year. This could ease congestion slightly, although it is likely to last until at least the second quarter of 2022, a period in which the phenomenon will continue to drive the all-time highs in freight rates.

Why will the "World Blueberry Tour" start in Peru?