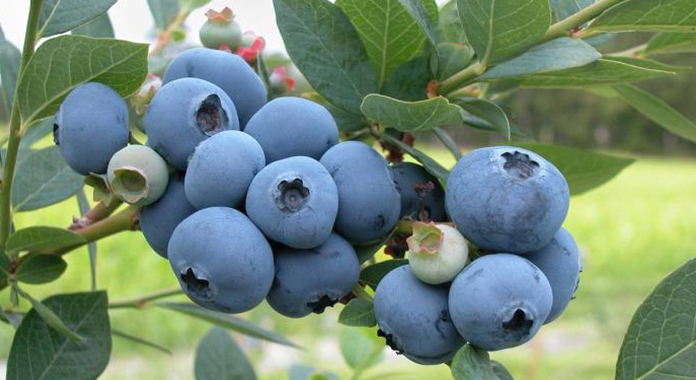 Peru's fruit exports have grown rapidly over the past decade, from just $ 540 million in 2010 to $ 3.8 billion in 2020, and Peru ranks among the top 10 fruit exporting countries in the world since 2017. Although Chile remains Being the dominant exporter from the southern hemisphere, Peru has caught along with other major suppliers from the southern hemisphere, Ecuador and South Africa.

Grapes, blueberries and avocados drive Peru's fruit exports, followed by a steady increase in citrus and mango. In 2020, the United States and the EU-28 accounted for more than 75% of Peru's exports, while China, Hong Kong and Canada each account for about 5%. 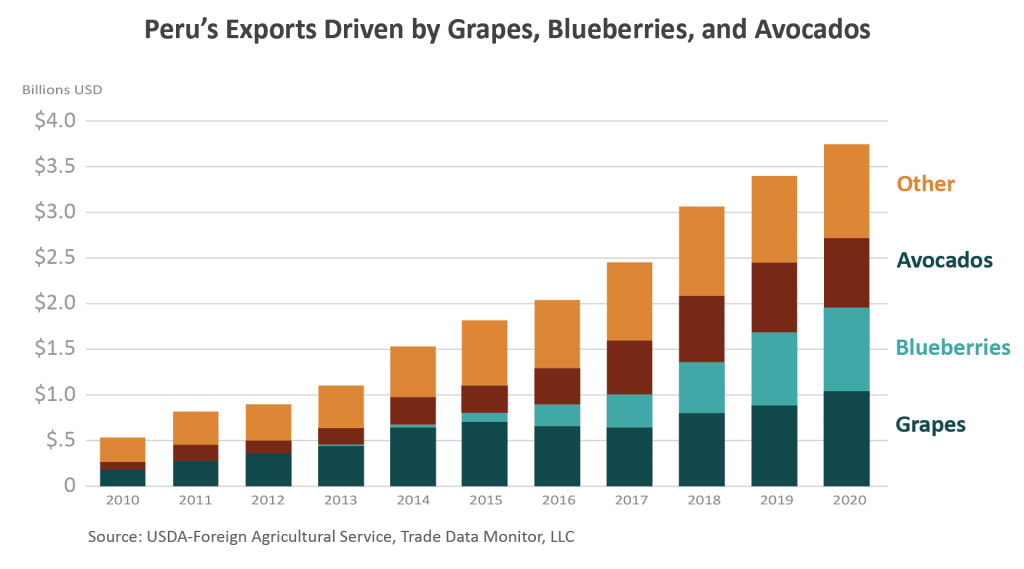 Blueberries are one of the most compelling fruit stories in the world, as production and exports increase more and more due to growing consumer demand. Blueberries have proven to be a versatile food, touted both for their taste and for their health benefits. They vary in form, from fresh to powdered, and appear as ingredients and additives throughout the menu, from appetizers to desserts, as well as in beverages, snacks, and health and nutrition products.

Production is diversifying internationally as product development broadens its profile in form and function. These new uses and forms combine with the growing consumption of fresh produce to drive production around the world. Thanks to advances in genetics and production practices, blueberries were grown in at least 30 countries in 2019, in a variety of climates, and on every continent except Antarctica. World production 2 is  more than doubled between 2010 and 2019.

Of the 26 countries that produced blueberries in 2010, at least 20 had shown growth for 2019. During that time, Peru had the most dramatic growth to become the fourth largest producer behind the United States, Canada and Chile. 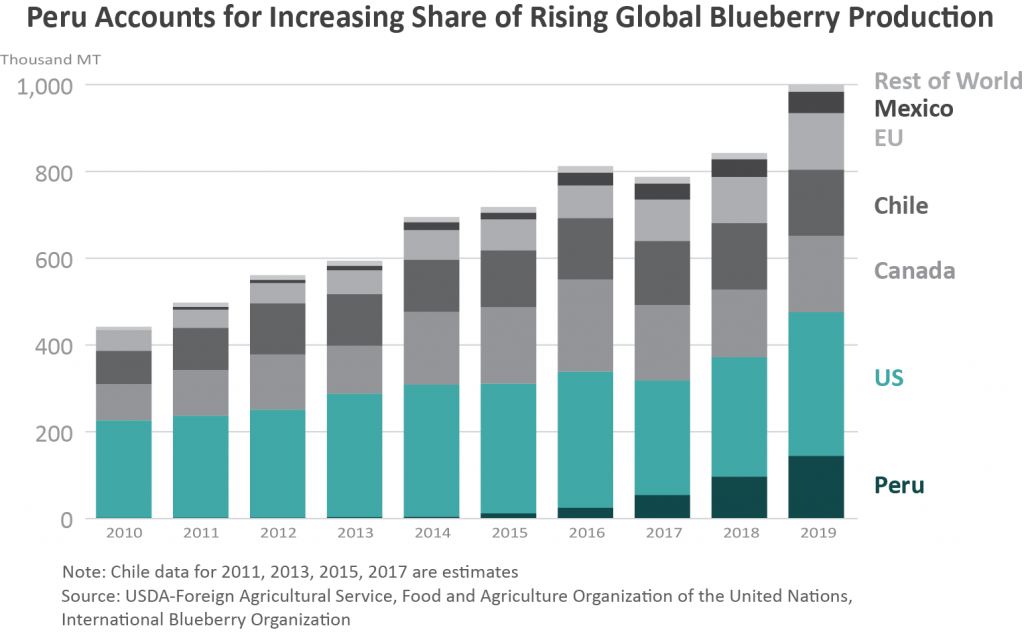 Blueberries in Peru are predominantly grown in the northern coastal region of La Libertad, approximately 8 degrees below the equator, where the climate allows for almost year-round production. The growing area is expanding beyond this hot, dry climate, as blueberries are now also successfully grown in the higher altitudes and cooler temperatures of the central Andes.

Production is almost exclusively destined for export, as high prices limit demand from domestic consumers. According to the United Nations Commodity Trade Statistics, Peru began exporting fresh blueberries in minimal quantities in 2010. Between 2010 and 2019, both production and exports have grown from almost zero to more than 140.000 and 125.000 tons, respectively. , with 2019 exports valued at more than $ 800 million.

The United States is the world's leading producer of blueberries, and US production has seen similar growth, from 224.000 tons to 330.000 between 2010 and 2019. But with US produce normally only available from March to October, imports of fresh blueberries they have grown to meet consumer demand. for supplies throughout the year. Although recent years show an increase in import volumes during the months when the seasons of US and foreign suppliers overlap, most shipments arrive counter-cyclically to the US season.

Since 2016, shipments to the United States have accounted for more than half of Peru's total exports on average, with most shipments arriving from September to February. Peru became the top US supplier of fresh blueberries in 2019, with US imports valued at more than $ 485 million (69,000 tons), increasing for the eighth consecutive year in 2020 to $ 516 million (84,000 tons).

Peru's other top markets in 2020 were the EU (valued at $ 305 million; predominantly the Netherlands and the United Kingdom) and China (valued at $ 70 million). Peru exported blueberries to more than 30 countries in 2020. As consumer awareness of blueberries expands globally, demand is expected to increase, further driving Peru's increased production and exports. 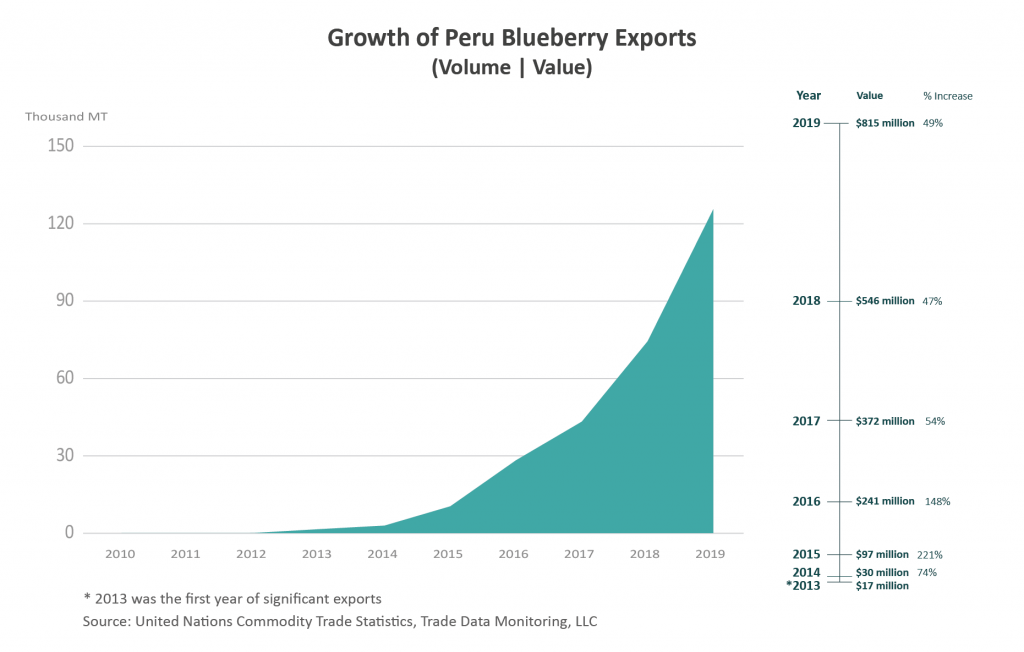 90% of consumers will continue to buy food online