Jorge Valenzuela Trebilcock, president of Fedefruta: "The world fruit industry is modernized and we run the risk of staying out" 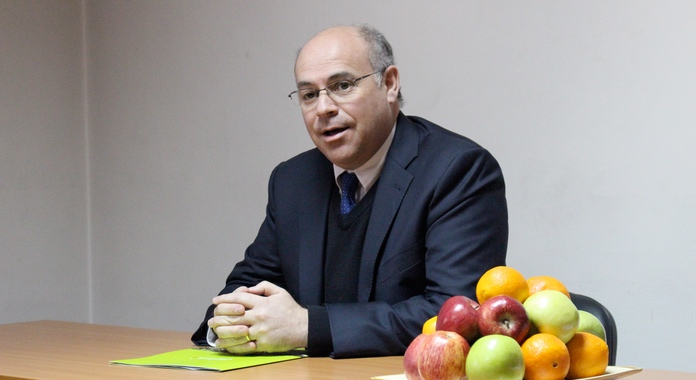 The low profitability margins of the main Chilean crops, including blueberries, grapes and apples, have not allowed our sector to renew itself against the competition of other countries, who have adopted the most sophisticated technologies.

National fruit growing needs about 600 million dollars a year to modernize its obsolete orchards with attractive species and varieties for international markets. That would make technological improvements that would make the processes more efficient for the producer, so we need a law that facilitates financing for this urgent task.

In our meetings with economic and agricultural authorities, we have proposed the structuring of a Law for the Promotion of Fruit Reconversion, since we need financing for the renewal of plantations to be a State policy, through this law that rescues the spirit practical and of promotion of the DL701, which pushed the development of the forestry sector, and that defines parameters to govern the design of credits with rates and payment terms according to the productive processes of the field.

Such a law would be very beneficial for situations such as beets affected by the closure of Iansa, and that must be changed to other crops. Also for farmers in southern Chile who are planning to convert to fruit growing, the northern uveros that are in crisis due to the returns of the Flame variety, the manzaneros of the central-southern zone that have seen their profits diminished with the passage of time and the lack of renovation, or the Ñuble cranberries that seek to solve their main supply challenges to the markets.

This conversion involves processes beyond varietal or species turnover. The technology in fruit orchards ranges from the same species or variety that wants to be replanted, to the machinery that will be used for the harvest weeks. All this space we want to cover with our proposal, to insert technology of last line to the properties and the processes. Efficient processes must be sought through the modernization of the orchards, which are more compact, with other densities, which are pedestrian and mechanizable.

Today there is a dynamic of modernization of the world fruit industry, and we run the risk of being left out. We are less and less commercially attractive to large Asian and American supermarkets, which find fruit more demanded by consumers in other places, so we must react and invest in the reconversion, before our volumes are in the background within the international concert.

He is the president of the Federation of Fruit Producers of Chile (Fedefruta), for the period 2018-2020. He is an agronomist from the University of Chile and an MBA from the Adolfo Ibáñez University.

He has held the position of vice president of Fedefruta for the past four years and a member of the board since 2012, when he entered as second vice president, although he had previously been part of the Guild Council.

The union leader is a producer of cherries and walnut trees in Malloa and executive director of Nueva Vid, a nursery company in the O'Higgins Region, specialized in the production and commercialization of grafted nurseries. In addition, he is the owner of Agrícola Natividad, a walnut tree nursery and a partner of Plantae, the leading exporter of fruit plants in Chile.

Safety and social responsibility: The challenges of the cranberry industry in Mexico

2018-2019 season of the blueberry: Analysis of the American markets and the offer

Ricardo Polis: "We cannot go back"