Manuel José Alcaino, one of the most strategic views of the Chilean industry

“Chile, rather than looking for crop yields in volumes, must achieve greater profitability for the same cultivated hectares. Forget…! They will never be number one again, that's impossible." 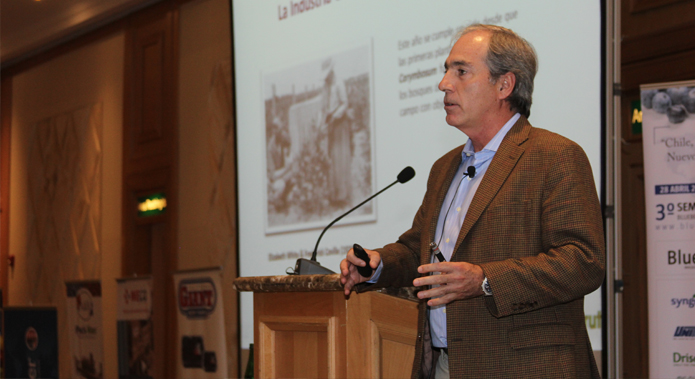 Manuel José Alcaino, president of Decofrut, is an international consultant recognized by the fruit industry, not only for his experience and good analysis of the market, but also because his vision goes far beyond the mere interpretation of data and dares with great certainty to write theses or strategic courses for the industry in search of overcoming the challenges imposed by the market, consumers and competition.

His opinion is frank and forthright, backed up with evidence and data. “The comfortable position that Chile had, placing itself between the windows of the end of production in British Columbia, in North America, Canada, and the start of the new season in Florida and its surroundings, which left a wonderful window that Chile discovered and used for long years, now it is closing. The windows are closing… the windows are closing”, he warned at the time.

"Forget it, you will never be number one again, it is impossible"

Alcaino has made repeated calls to redesign the development strategy of the Chilean industry. "This is an industry that had a fantastic birth at the end of the last century and then an unforced but hard decline, and that should make us rethink things," he says.

“Chile, rather than looking for crop yields in volumes, must achieve greater profitability for the same cultivated hectares. Forget…! they will never be number one again, that is impossible”, warns Alcaino and assures that the more than 200 thousand tons produced by Peru are impossible for Chile to reach, for various reasons, among others due to the structure and composition of the industry, which although extends over 18.000 hectares throughout the country, 54% corresponds to plantations of less than 5 hectares and another 33% corresponds to units of less than 20 hectares, that is to say, almost 90% corresponds to small farms, a very different reality to that of Peru, in which the vast majority of its fields are hundreds and thousands of hectares.

The Chilean blueberry industry is an industry of plots, he says, so it is very difficult to compete since each plot has its own agricultural management, its cultural practices, its different varieties, its early or late harvest, in short, each plot has its particularities, which generates a terrible uniformity at the quality level, which is very difficult to handle according to its analysis.

Manuel José Alcaino's view of the industry is stark and deep, and he discloses it with total frankness, and we will have the opportunity to learn about his new ideas and development strategies for the Chilean industry in the talk "Opportunities and challenges post pandemic of the Chilean blueberry industry”, which he will deliver at the XVIII International Blueberry Seminar to be held on April 7 at the Monticello Conference Center.

"You have to forget about volumes and worry about profitability per hectare," says Alcaino, and in this perspective he congratulates the Chilean industry for the progress in the production of organic blueberries and the transfer to frozen of the fruit that does not meet the standards. standards of excellence in quality.

Regarding the development strategy in the global market, the international specialist has insisted that efforts should be focused on taking over the European market, which has a fairly wide range of growth in consumption and maintains very attractive prices for the fruit .

Regarding the Asian market, he assured that "in markets where the consumer looks, and if he likes it, he tries it, and if he likes what he tastes, he buys it, as in the case of China, a fruit that is not of great caliber, but yes, it has a very good flavor like the Chilean one, it has much more projection and opportunities”, assuring that China represents great potential due to its visual culture, appreciating the organoleptic qualities of the fruit, in addition to being consumers who prioritize the sweetness of the fruit , which in both aspects gives an advantage to Chilean fruit, he says.

For years, the expert's message to the Chilean industry has been to take a serious look at the new genetics available and implement varietal replacement without delay to regain competitiveness in the market.

"We already have to get rid of the varieties that Chile has, which bases 80% of its production on 4 varieties that are not bad, they arrive well, they are solid, but they lack size and that is where we have to invest," he said in his moment.

In summary, the vision of Manuel José Alcaino is one of the most strategic and successful in the Chilean industry and one of the most important in the international industry, as a result of his vast experience as president of Decofrut, a company dedicated to the reception and fruit quality certification, with offices in 10 ports on three continents, and which has the Department of Studies with the most experience in the southern hemisphere, publishing reports on the movements of fruit markets in Asia, Europe, Latin America and the United States .

Just to reiterate that we will have the opportunity to learn about his new ideas and development strategies for the Chilean industry in the talk "Post-pandemic opportunities and challenges of the Chilean blueberry industry", which he will give at the XVIII International Blueberry Seminar to be held on April 7 at the Monticello Conference Center.