The prospects for this significant increase in consumption have caused the area planted with blueberries in Huelva to continue in its growth trend, increasing by 5,6% in the current season. 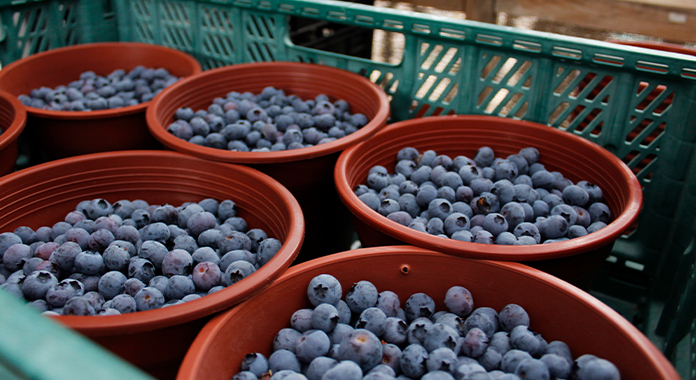 The commercialization of the Huelva blueberry began with reduced volumes in January, increasing little by little in the months of February and March. In April and May, the volume of marketed production was below the average reached in the period of the past campaigns between 2017 and 2019. Only in June did this reality rise, achieving an index of 46,7% above the previous campaigns, although in this calculation the figures for the 2019/20 campaign are not considered, as they are distorted as a result of the effect of the pandemic.

Low prices and going back

The province of Huelva is the region with the highest blueberry production in Spain, producing 95% of the total, and the largest producing area in Europe at the level of early fruit. According to projections by European experts, blueberry consumption in Europe could multiply exponentially in the next decade and increase demand for the product by five times, easily reaching 700.000 tons per year of consumption in the region.

This reality has reactivated the Huelva industry, which already has its own varieties and intends to extend production campaigns. On the other hand, the consumption of blueberries has been privileged in the pandemic crisis, not only due to the preference of consumers and the market for healthy and natural foods, but also because of the organoleptic qualities of the fruit, which make it comfortable to enjoy it individually or collectively in moments of confinement; in the field of teleworking or distance study; as fresh fruit, snack, or frozen; alone or as an accompaniment to other foods.

The prospects for this significant increase in consumption have caused the area planted with blueberries in Huelva to continue in its growth trend and increasing by 5,6% in the current season, reaching figures above 3.600 ha.

Regarding the production of blueberries in the 2020/21 campaign, it has increased by 27,1% compared to the previous campaign, reaching volumes close to 60.000 tons, and if we compare the four months that go from February to June, in In the period from 2016 to 2021, the increase in blueberry exports from Huelva has been 99% in volume and almost 70% in value. Of these volumes, more than 75% of Huelva blueberry exports go to the markets of Germany (43%), the United Kingdom (17%) and the Netherlands (15%).