Berries, the fruits that are gaining ground in the Mexican countryside 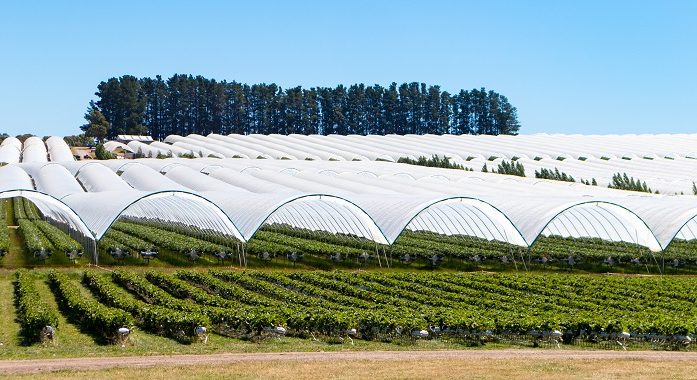 However, as you advance along the road, the image becomes clearer, it is not snow that dominates the panorama of the region, but thousands of hectares of white canopies, which not only adorn the lower part of the volcano, but also They extend over a huge portion of the south of the state of Jalisco and are home to a fruit that took a decade to become one of the main agri-foods that Mexico exports: berries.

The planting of blackberries, blueberries, raspberries, currants and strawberries has brought development to the regions where they are produced, since the same workers report better wages compared to other tasks; However, its rise is not exempt from criticism related to the harsh working hours, damage to the environment or the decrease in space for other vital crops for Mexico, such as corn, the latter in the midst of a food crisis due to high inflation. .

The conversion of fields is evident, since it is enough to talk with any inhabitant of the region to verify that 10 years ago the panorama was totally composed of corn, cane or agave crops; however, now tunnel-shaped metal structures predominate, covered only at the top with white tarpaulins, which serve to protect those also known as berries or forest strawberries from heavy rains.

Official data from the federal government indicates that in the last decade the area destined to plant corn instead of growing has decreased, since it has fallen from a peak of 7.7 million hectares to 7.2 million; in contrast, that destined for berries has tripled. According to the National Association of Berries Exporters (Aneberries), it has gone from practically nothing in the early 2000s to 17 hectares in 2011 and 55 hectares at the end of 2021.

Although the amount of land devoted to corn is many times greater than that of berries, it cannot be ignored that Mexico is deficient in this vital grain for the population, to the extent that 37 percent of what is imported is imported. consumed in the country (around 17 million tons), because, according to specialists, there is no longer enough land to increase grain production.

In 2021 alone, according to data from the Bank of Mexico, the country disbursed 5 million dollars in corn imports to cover national demand, the largest amount in history. In contrast, in the same year, berry producers recorded income of 146 percent, an increase of 2 percent compared to the sum of 759.

As this medium was able to verify in a tour of the region, municipalities in the south of Jalisco such as Zapotlán el Grande, Tuxpan, Gómez Farías and Zapotiltic show enormous extensions of land destined for the cultivation of berries; however, the producers, many of them large companies, are beginning to make their way to other points in the center of the state, such as Jocotepec (especially around Lake Chapala), Zacoalco de Torres, Tapalpa and Tala.

It is precisely in this last municipality where it seems that the next great reconversion will take place, as Don Lupe, an inhabitant and small producer of corn from San Juan de los Arcos, in the municipality of Tala, tells us, who from the top of a small hill dominates the view of the town, tells how little by little the sowing of corn, cane and agave has given way to that of berries, which is beginning to take over the landscape.

“Before, this was a corn-growing town with a lot of cane, because here the mill is very close, but little by little it has been lost, right now the young people are no longer interested, or they go to the other side or the narco. Many people there have land, but either there is no more money to plant or there is no one to do it, so they better rent it to other people or companies so that they can plant those crops. berries”, he says as he points to the tunnels no more than 500 meters from his small house at the foot of the hill.

In Tala and the surrounding area, the change is noticeable, since along the macro-libramiento that crosses the town it is possible to see a large number of billboards with the legends of "land for rent or sale for industrial use", which refer to large extensions of land that can be used to install tunnels and cultivate these forest berries through industrial processes, because as its name indicates, the natural place where they grow is in the bushes of the forests.

In an interview, Juan José Flores García, general director of Aneberries, pointed out that the changes in cultivation that have taken place in recent years are due to a matter of profitability and well-being for the region, since it leaves higher profit margins and economic benefits. for communities.

For example, he said, a small cane field offers employment for one or two people, while one of berries to between eight and 10; the salary in the corn fields is barely 170 pesos a day, when in the fruit field it is 270 pesos plus the extra income that is obtained during the harvest season.

“As long as you do legal production and under the rules established by law, you can produce whatever you want. Although something important to highlight is that we are self-sufficient in white corn, which is what we consume, what we import is yellow corn, for the animals, that is where it should be reformed, but from what we see, programs are already coming, ”he said.

According to a document of Trusts Instituted in Relation to Agriculture, called "Panorama Agroalimentario berries”, which dates back to 2016, the reconversion of the fields was promoted by the same government of past administrations, as economic and technical incentives were given for producers to stop investing in crops that they considered less profitable.

“In 2015, 150 hectares were added to the production of strawberries, by replacing corn and sorghum crops… FIRA is working so that in 2018 800 hectares are converted to the cultivation of berries”, indicates the document published in the administration of Enrique Peña Nieto.

The preference for growing these fruits instead of maize is not surprising considering the wide profit margin between the two. For example, a recent study by the Autonomous University of Chapingo points out that the evidence of the high profitability of berries is the benefit-cost relationship, which determines the viability of a productive project.

This relationship, details the analysis, is 2.82 for blueberries, 1.88 for raspberries, 1.82 for strawberries and 1.76 for blackberries; These relationships are greater than those observed in basic crops such as sugar cane and corn, which have a benefit-cost relationship of only 1.5 and 1.2, respectively.

The profitability of berries it is similar to that of other crops that have a high export index such as avocado, whose index is 1.84.

Behind the high profitability of these berries is the notable increase in their price as a result of high demand, especially from the United States and certain groups with high purchasing power in Mexico, because according to a study by Harvard University, This fruit is high in vitamins, minerals, and nutrients that fight disease and help slow aging.

"On average, people who eat more berries seem to live a little longer," says Eric Rimm, a researcher at the American university, in an article.

The foregoing is a consequence of greater demand, which Flores García confirms by pointing out that in the last two years, as a result of the pandemic, the sale of berries "grew exponentially" because people associate them with foods that strengthen your immune system for all the nutrients they contain.

From Jalisco to the US

Michoacán is the largest producer of berries of Mexico, but Jalisco is the largest exporter, responsible for 60 percent of the national total, this as a consequence of the fact that practically all the fields work to send to the United States, such is the case of the El Capricho ranch, in Jocotepec, which according to its owner, José Cuenca, 97 percent of its production has the neighboring country as its final destination.

Cuenca is just one of many owners who, faced with the great demand from the United States for berries They chose to reconvert their crops because, he says, before their eight hectares were focused on raspberry production, they were lands for corn, sorghum or even vegetables, but now the profitability is higher, which allows them to contribute to the economy of the region. with more jobs, better paid.

The producer who gives direct work all year round to between 15 and 20 people, and up to 40 at harvest time, reported that his case is not isolated, since many landowners in the Jocotepec region and surroundings have done the same thing, even, he said, they began to rent properties that were up to 30 years old without being used.

“15 years ago nobody saw this fruit, but right now the price is high and everyone plants it. In recent years the production of berries, especially raspberry and blackberry increased a lot due to demand and, as long as there are more consumers, this will continue to grow, "concluded the farmer.

"The Trujillo International Seminar is a recognition of Peruvian producers"